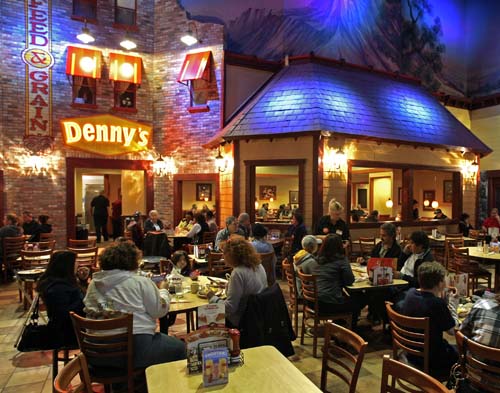 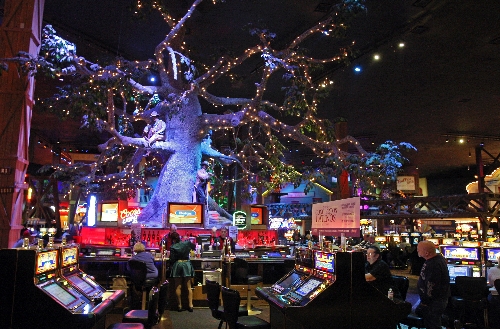 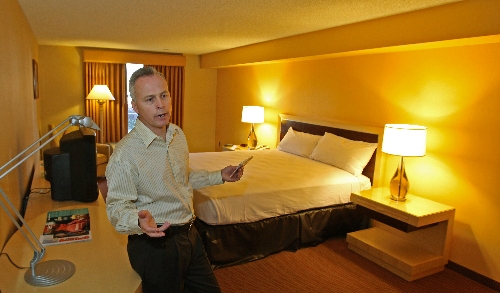 If the shuttered Fontainebleau had been completed, hotel guests might have shelled out more than $200 a night for one of the Strip hotel’s upscale rooms.

Instead, the designer desks, chairs, dressers and night stands that had been slated for the Fontainebleau are being used by hotel guests at Buffalo Bill’s in Primm, where rooms fetch a nightly rate of $29 to $39.

That leaves customers some money left over to enjoy a meal at the new Denny’s, which opened inside the refurbished hotel-casino at the Nevada-California border along Interstate 15 last week.

Even some of the carpeting, which was to be used in Fontainebleau’s hotel hallways, is now installed in the corridors of the 1,242-room hotel at Buffalo Bill’s.

"They are pretty nice furnishings," Stuart Richey, vice president of marketing for the three Primm Valley casinos, said Tuesday while showing off one of the property’s remodeled rooms. "We wanted to do something nice for our guests."

Despite the constraints of a 21-month-long bankruptcy court administered reorganization, Herbst Gaming was able to spend less than $3 million to remodel Buffalo Bill’s over the past few months.

By recent Las Vegas standards, the renovations were not pricey. Upgraded hotel rooms with the Fontainebleau furniture cost about $1.5 million, removing the property’s coffee shop in favor of the Denny’s restaurant was $300,000, and changing out the lighting throughout the casino with energy-efficient fixtures ran $750,000.

The casino portion caused the shutdown of Buffalo Bill’s between Nov. 29 and Dec. 23.

Herbst Gaming Chief Operating Officer David Ross said the renovations were done with the approval of the bankruptcy court and the company’s outgoing board of directors. Small capital expenditures were embedded in the company’s 2010 budget, with the idea of drawing in business.

"Buffalo Bill’s is a great example of a strategic approach of reinvesting in our properties," Ross said. "The renovations were accomplished during the down time and Denny’s was a brand name that makes us more competitive."

Ross said company operating costs dropped about $40 million over the last 12 months "in order to run the company in the most efficient manner possible."

That included purchasing unopened case goods out of the Fontainebleau at bargain-basement prices, giving Buffalo Bill’s customers a taste of luxury.

Herbst Gaming is expected to emerge from bankruptcy by the end of the year after reducing the company’s debt from $1.2 billion to $350 million. A consortium of 140 lenders will take control of the company, which has 15 casinos in Nevada, Iowa and Missouri and a Nevada slot machine route business, removing the Herbst family from ownership.

Buffalo Bill’s is the largest of the Primm casinos, which includes the 625-room Primm Valley and the 779-room Whiskey Pete’s.

Primm officials also look to attract some of the 40,000 automobiles a day that pass by the properties.

During the recession, when high gasoline prices and the economy kept Southern Californians closer to home, the Primm casinos lost business to the booming Indian gaming market in the counties of San Bernardino, Riverside and San Diego.

Richey, who has been with the Primm casinos since September 2009, said the three properties offer more than any of California’s Indian gaming market.

Primm amenities include the 6,500-seat Star of the Desert Arena at Buffalo Bill’s, which books the same performers as many of the Indian casinos, the Tom Fazio-designed Primm Valley, a spa inside the Primm Valley, and the Fashion Outlets retail mall.

Denny’s, which has more than 1,500 restaurants nationwide, fits within the Primm market, Richey said.

"It’s a well-known brand that gives our customers another reason to come off the highway and visit us," he said.