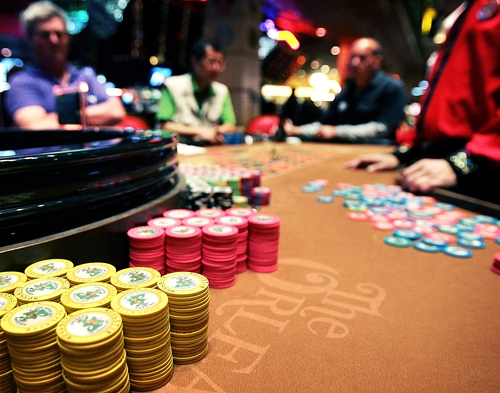 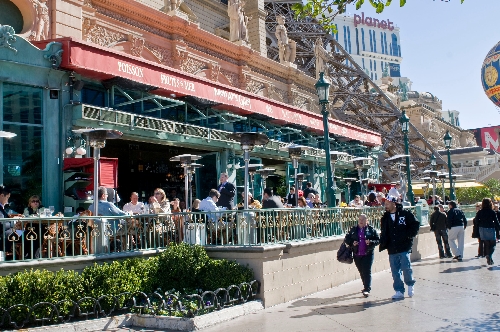 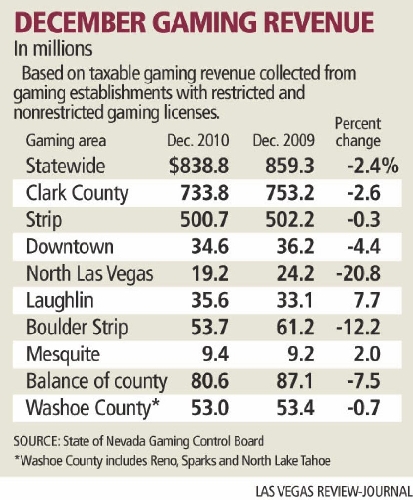 On the Strip, casinos reported gaming revenues of $5.77 billion, an increase of 4.1 percent compared with $5.55 billion collected in 2009. Those results also ended a two-year slump.

Whether the figures mean Nevada’s casino industry is on the road to recovery is still up for debate.

Revenues for Clark County as a whole, up 0.8 percent, and the Strip were the only two reporting locations in Nevada showing year-over-year gaming revenue growth.

None of the state’s 18 markets had double-digit declines.

Casinos in the Washoe County city of Sparks recorded the largest decline, a 9.7 percent dip.

“The first six months of the year showed gaming revenues declining by 1.3 percent,” Lawton said. “But in the second six months, we were up 1.5 percent. After two consecutive yearly decreases, we’re up. But we’re barely up.”

“That shows we still have a ways to go,” Lawton said.

Statewide gaming revenues fell 10.4 percent in 2009 and 9.7 percent in 2008, due mostly to a slumping economy that decimated consumer spending nationwide and had several major Strip casino companies on the brink of bankruptcy.

They fell onto the positive side just four months out of 12 in 2010. Three of those months were double-digit increases, however, including 13.9 percent in February, 11.5 percent in August and 11 percent in October.

“Despite the modestly weaker results in December, encouraging revenue trends in some of the prior months, as well as positive commentary from management teams, support our thesis that the Las Vegas market has bottomed,” Wells Fargo Securities gaming analyst Dennis Farrell Jr. told investors.

“We expect modest revenue improvement from large gaming operators, as Las Vegas demand rebounds over the next 15 months.”

Revenues from table games and other casino areas grew 5.6 percent in 2010, following a 7.6 percent decline a year ago.

Baccarat was the driving factor for the state.

Of the nearly $3.8 billion won from tables games in 2010, $1.87 billion came from baccarat. The game’s revenue figure, which was up 21.4 percent compared to a year ago, was the highest amount ever recorded for baccarat in a 12-month period.

Gamblers wagered $10.7 billion on baccarat, which was more than one-third of the nearly $31.2 billion wagered on table games statewide in 2010.

Jacob Oberman, director of Gaming Research for CB Richard Ellis, said the baccarat figures are helping casinos operated by just a few companies and not the Strip as a whole.

“The strong table games revenues are benefiting the luxury properties disproportionately, and are likely not trickling down to the middle-market properties,” Oberman said.

Lawton said 2010 marked the first time ever in state history that the amounts wagered by gamblers on baccarat and the revenues collected on the game by casinos surpassed blackjack.

Blackjack provided casinos gaming revenues of $975.7 million, a decline of 3.3 percent and the first time since 1998 that the revenues from the game fell below $1 billion.

“We are in a baccarat-based recovery,” Lawton said.

The Strip’s calendar year increase was offset by revenue declines of 5.8 percent in downtown casinos, 2.1 percent in Laughlin, 4.2 percent on the Boulder Strip, 6.4 percent in North Las Vegas, and 5.5 percent in the balance of Clark County.

Wall Street had more interest in the Strip’s performance during December, where gaming revenues of almost $501 million were relatively flat compared with $502.1 million collected in the same month a year earlier.

The amount of money wagered on slot machines along the Strip in December grew 2 percent to $3.5 billion.

“When taking today’s results into account with recently released data indicating a 4 percent year over year increase in visitation during the month of December, we are confident Las Vegas Strip operators continue to follow the path to recovery,” Wieczynski told investors.

He said optimism regarding the city’s 2011 convention calendar, a stable airline carrier schedule and the continued positive impact of baccarat, could send Strip gaming revenues to more than $6.1 billion this year.