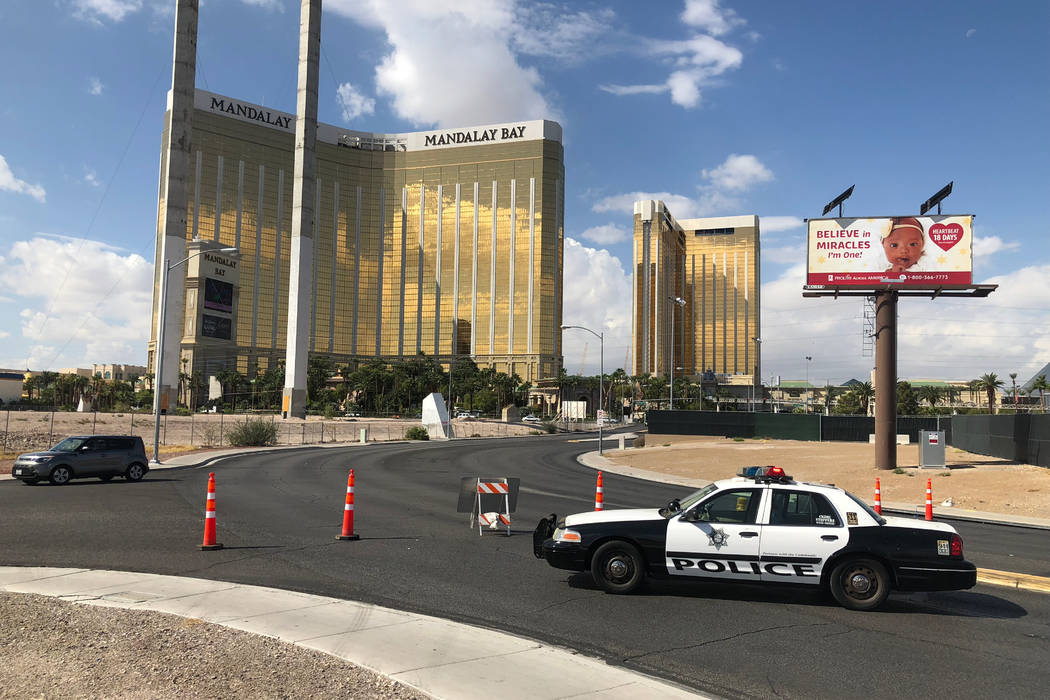 On Monday, Oct. 1, 2018, a police car blocks Giles Road behind the grounds where the Route 91 Harvest festival was held a year earlier. (Todd Prince/Las Vegas Review-Journal) 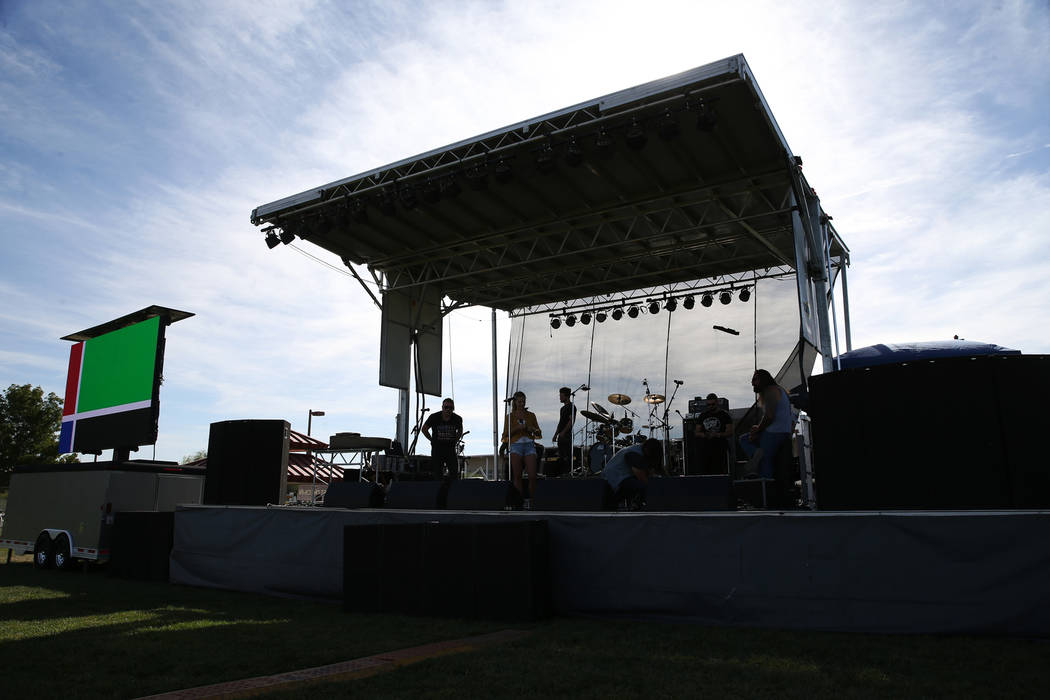 It marked the 22nd court-ordered release since early May of Metropolitan Police Department audio, video or documents from the Oct. 1, 2017, shooting, which left 58 concertgoers dead and hundreds more injured.

Inside the control room, two separate videos show security personnel swiveling and panning several surveillance cameras, including one that shows an exterior shot of the resort’s north tower, where the gunman’s 32nd-floor suite was located.

Throughout most of the body camera footage, the two officers filming the videos do not appear to be aware of the scope or severity of the massacre that already had unfolded at the festival grounds across the street.

“I think this could be some (expletive) drunk, pissed-off idiot,” one officer says about an hour and a half after the attack. “He had a pellet gun, right? It’s not a rifle.”

That may be because the officers’ radios did not work inside the security room.

“It sucks you can’t hear anything,” one officer says in the control room about 40 minutes after the last volley of gunfire. “We’re kind of stuck. We can’t do anything. SWAT got here quick, though.”

About a minute later, a security guard asks the officers if they can get radio contact with any other officers.

“No,” an officer responds. “We have no radio right now. Right now we can’t even hear what our own people are saying.”

The Las Vegas Review-Journal previously reported that many officers experienced communication problems on the night of Oct. 1, including a lack of radio reception inside Mandalay Bay and little to no reception inside the resort’s security control room. The newspaper’s investigation was based on more than 500 officer reports that were released in May.

In the same video at Mandalay Bay, another officer can be seen using a landline to contact police dispatchers, but it is unclear how long that phone call lasted and what, if any, information was relayed.

“All right, then I need you to go to your friend’s room,” the dispatcher says to one protesting caller, later adding that “the elevators are down.”

Another video shows an officer clearing guest rooms on the 32nd floor sometime after police found the gunman dead by suicide inside his suite. The officer tells a K-9 sergeant that he arrived before any other officers, but by then the gunfire had stopped.

At one point, the officer walks into an empty guest room, removes his gear, sits down and takes a few deep breaths. Local news coverage of the attack plays on the room’s TV as he swigs a red Gatorade bottle, then walks up to a window and peers out.

“All right,” he says, picking up his gear again as another officer waits to resume clearing rooms. “Let’s do this.”

Police previously released more than 3,000 pages of witness statements and officer reports, as well as 911 calls and other body camera footage.

The Review-Journal and other media organizations sued for the records in the days after the shooting. Metro fought their release for months, then began handing over the records in batches of varying size and type after a court forced the department to comply.

The department released its own 187-page report on the shooting investigation in early August.