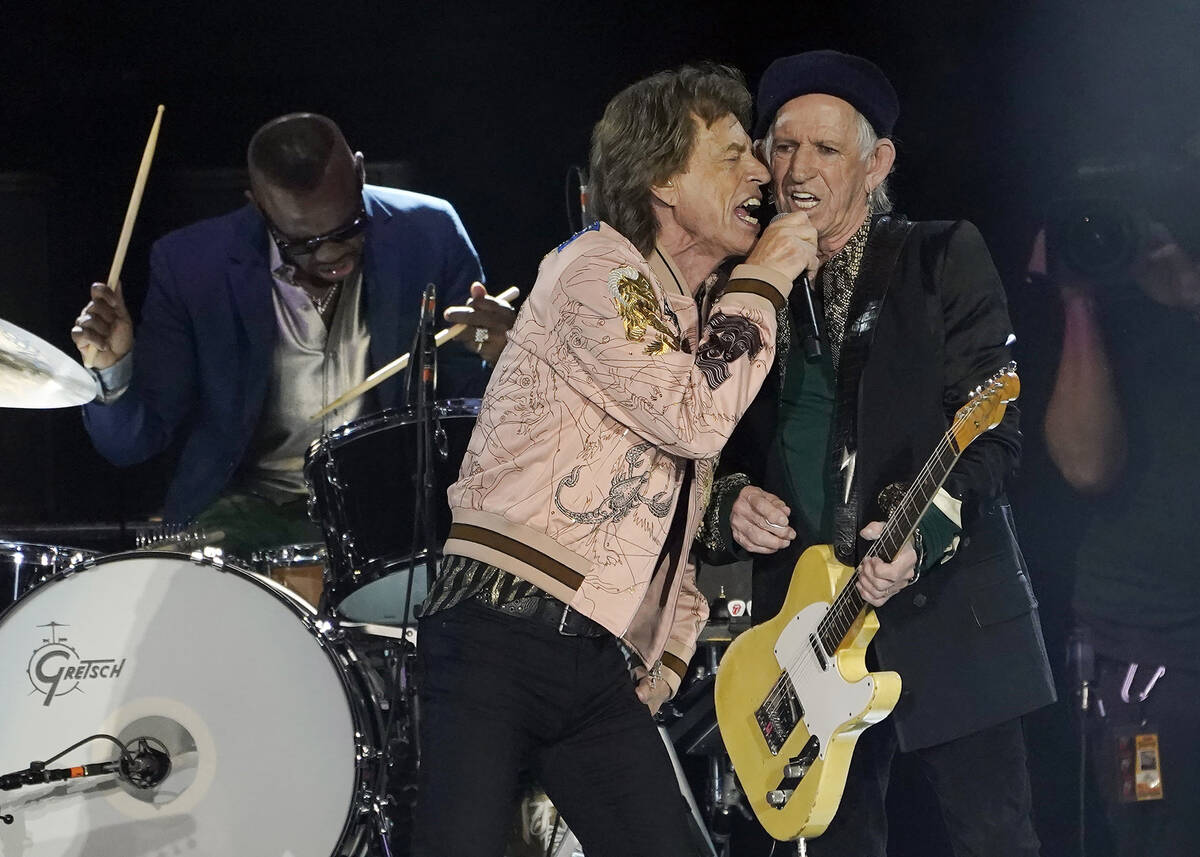 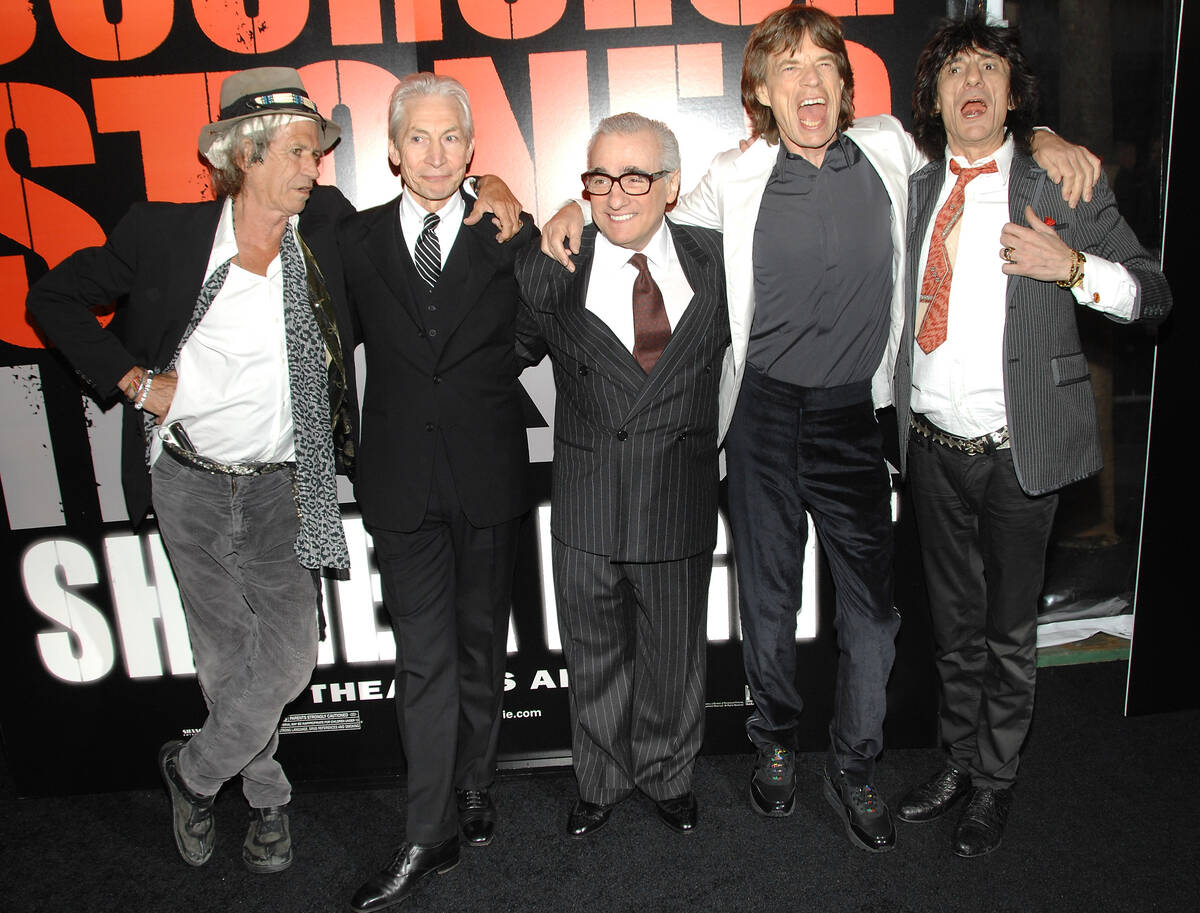 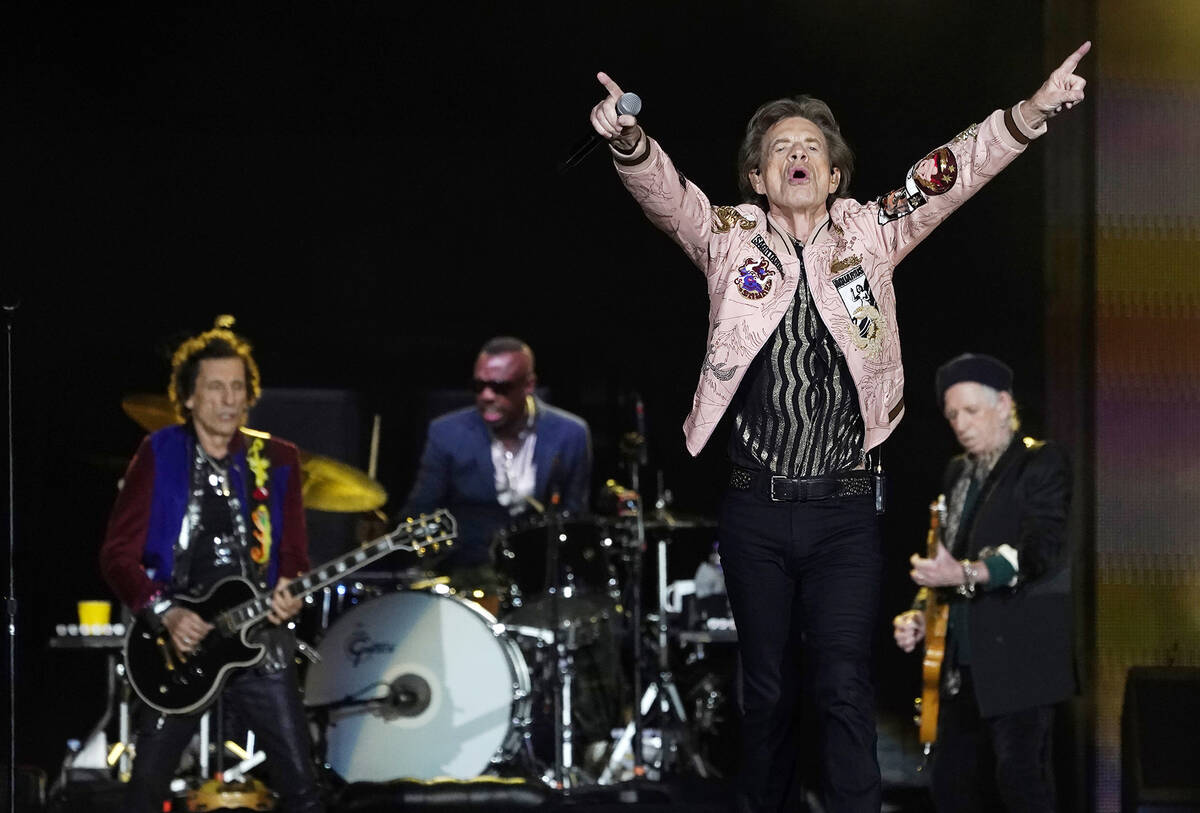 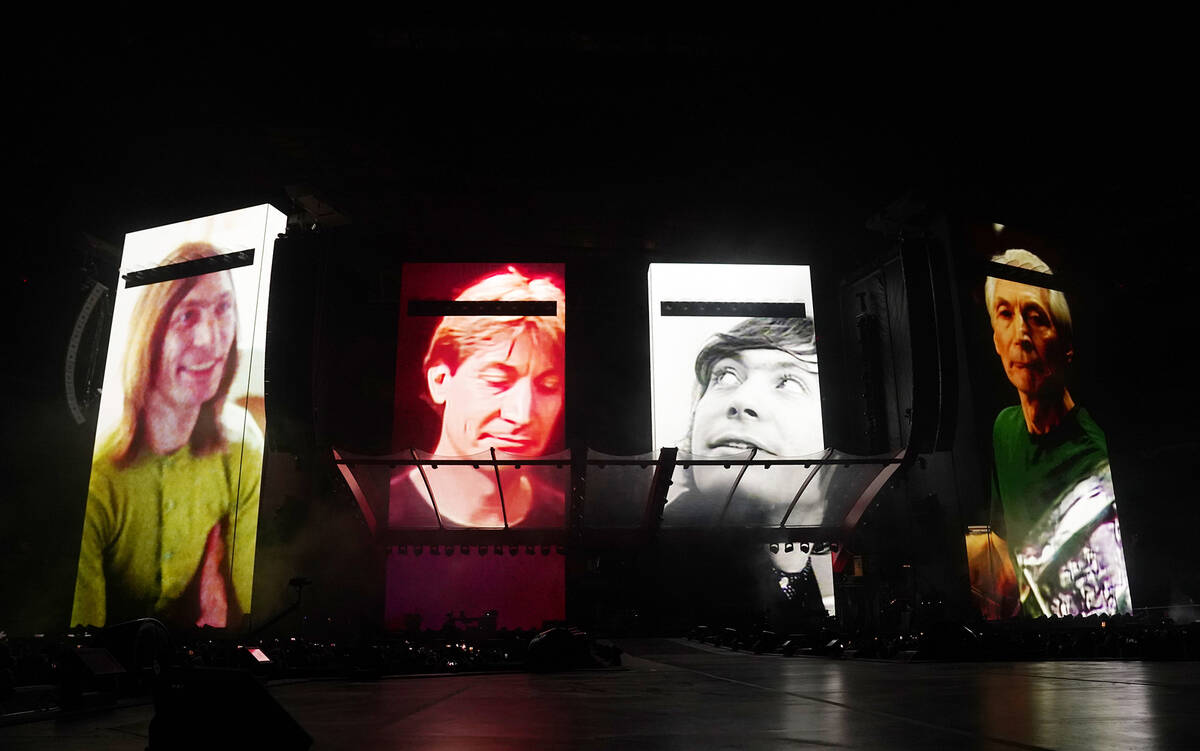 Who needs another thumb-sucking cover story about the Rolling Stones? Not you! What you do need, however — on the occasion of the band’s show Saturday at Allegiant Stadium (tickets start at $120, ticketmaster.com) — is a heaping bowlful of snack-size Rolling Stones factoids, trivia and info bits, which we have gathered for your (heh-heh) satisfaction.

THE STONES’ ‘NO FILTER’ TOUR BY THE NUMBERS

■ Top resale price for a front-row ticket to Vegas show on StubHub: $6,000

■ Number of years the band played with drummer Charlie Watts, who passed away in August: 59

ON THE ROAD AGAIN

The Rolling Stones have a few wrinkles — give ’em a break, some are nearly 80 — and so does their current set list. While the majority of the songs are hits as big as the stadium they’re currently packing, karaoke staples from here to Uzbekistan, there are a couple of twists on the current tour.

(Spoiler alert! Read no further if you want the song selection to be a surprise.)

For starters, the fifth or sixth song of the night is chosen by an online poll on the band’s website, where fans vote on one of four tunes for the Stones to play. (A few samples from other cities: “Dead Flowers” in Nashville, Tennessee; “Angie” in Pittsburgh; “Monkey Man” in Minneapolis).

Elsewhere, the band has been airing a cover of the Chi-Lites “Troubles a’ Comin’ ” on some nights, which the Stones recorded in 1979 and was recently released as part of the 40th anniversary “Tattoo You” boxed set.

They’ve also been dusting off early single “19th Nervous Breakdown,” which they’ve played only twice this century before 2021, and the reggae-influenced, pandemic-inspired “Living in a Ghost Town,” released last spring, which is when this leg of the tour was originally set to launch.

Hey, if the coronavirus is going to postpone your tour, might as well get a new song out of it, right?

Stones songs have been covered more times than Keef has lit up a cig. Here are five of the most far-out, fierce, funky and, in some cases, downright unwarranted versions of Stones tunes.

The poo-flingin’ punk rock antihero/world’s greatest “Geraldo” guest did really, really, really bad things to his body as a serious, lifelong substance abuser — and he does even worse things to “Dead Flowers.” If it sounds like Allin gargled with Clorox and snorted a six-pack of minced light bulbs before recording this nasty little ripper, well, it’s because he probably did just that.

Not a straight-up cover song here, but so what? Vanilla Ice does whatever he damn well pleases with whatever work of art he chooses to enhance with his presence. If the man wants to Sharpie a mustache on the “Mona Lisa,” he will — and you’ll like it. OK, you probably won’t, as evidenced by this cut, where he incorporates the chorus of the Stones’ “(I Can’t Get No) Satisfaction” into a song that immortally rhymes “please” with “skeeze” — just like fellow poet Bill Shakespeare surely would have wanted.

Skrew, ‘Sympathy for the Devil’

These Texas industrial metallers made “Sympathy for the Devil” actually sound like something recorded in the burning depths of hell with an agitated Satan on the mic totally cheesed off after losing a sweet four-team parlay card thanks to a missed field goal by the Steelers (Serves you right, Beelzebub, who bets on the Steelers?).

In 1978, the Stones released a “Special Disco Version” of this “Some Girls” single that marked the band’s first-ever dance remix. In that spirit, this neo-soul standout keeps hips swishing with a hot-and-bothered take on one of the Stones’ most danceable tunes. This one’s funkier than morning breath, kids.

Paint It Blue: A Bluegrass Tribute to the Rolling Stones, ‘You Can’t Always Get What You Want’

You can’t always get what you want? Well, maybe not, but if you try sometime, you find you get what you need — and what you need — what we all need — is a banjo-enhanced version of this Stones favorite to soundtrack the chugging of moonshine from Mason jars. Chaw not included.

Mick Jagger’s distinctive onstage moves have made him the subject of a million impressions. Here are a few notable ones (all of which can be found online):

■ Richard Belzer: Known today mostly as a longtime inhabitant of the “Law & Order” universe, Belzer was a pioneering comedian during the ’70s. His may be the best Jagger impression of them all, oozing adrenaline and macho strut.

■ John Mulaney: In a talk with Larry King, the stand-up comedian notes that Jagger’s presence is all about being authoritative. “He’s done stadiums for 50 years, so he’s not ever gonna be like, (meekly) ‘Do you have a laptop charger I can borrow?’ He just goes, ‘Yes, no, yes!’ ”

■Stephen Colbert: The satirist and late-night host reveals to Howard Stern that he used to play in a Stones cover band called “A Shot in the Dark” and rips off a few moves to prove it.

■ Mick Jagger: In a delightfully meta sketch with Jimmy Fallon on “Saturday Night Live” in 2001, Jagger, talking to Fallon’s mirror-image Jagger, plans his stage moves. When Fallon/Jagger suggests doing “the rooster,” Jagger/Jagger objects, saying, “Why don’t you just put me in a bloody time capsule in 1969.”

And a bonus: Mick doing an impression of bandmate Keith Richards in a 1993 SNL “Weekend Update” sketch that has Mike Myers doing Mick. It’s worth it just to hear Jagger/Richards say to his doppelganger, “Mick, you ignorant slut.”

Think of the Rolling Stones in concert and the songs you’ll likely think of are the gritty, R&B-inspired hits. But the Stones have a sentimental side, too:

■ “Angie” (1973): Keith Richards maintains that, contrary to urban legend, it wasn’t inspired by Angie Bowie, which only underscores the power of its tale of failed romance.

■ “Wild Horses” (1971): This longtime staple of proms still can make the heart flutter a bit.

■ “Memory Motel” (1976): An affecting story of a haunting one-night stand and life on the road.

■ “As Tears Go By” (1964): Because any list like this has to include this song, which also was a hit for Marianne Faithfull.

■ “Fool to Cry” (1976): An introspective song about seeking and finding solace.

AND WE’RE GONNA RE-LISTEN TO ‘LAST TEMPTATION OF CHRIST,’ TOO, JUST TO BE SURE

■ “Mean Streets” (1973): Charlie Cappa (Harvey Keitel) grooves his way through a strip club to the sounds of “Tell Me,” while “Johnny Boy” Civello (Robert De Niro) is introduced, walking in slow motion with a girl under each arm, as “Jumpin’ Jack Flash” plays.

■ “Casino” (1995): Settle in for “Gimme Shelter,” again, along with “Sweet Virginia,” “Heart of Stone” and “Long Long While.” It’s “Can’t You Hear Me Knockin’,” though, which plays as Nicky Santoro (Joe Pesci) recounts his wild Las Vegas crime spree, that really lingers.

■ “The Departed” (2006): “Gimme Shelter” returns yet again as Frank Costello (Jack Nicholson) opens the film by recounting the racial and criminal unrest in the uglier parts of Boston.

■ “Shine a Light” (2008): The Stones’ biggest hits are here, along with covers of “Just My Imagination (Running Away With Me)” and “Champagne & Reefer,” in this concert documentary Scorsese directed at New York’s Beacon Theatre.

IF I DON’T GET SOME SECONDHAND STONES MERCH, YEAH, I’M GONNA FADE AWAY

Meanwhile, over on Etsy …

WHAT, NO ‘EMOTIONAL RESCUE’?

The Rotten Tomatoes scores of movies Mick Jagger has appeared in

■I love the Stones. I can’t believe they’re still doing it after all these years. I watch them whenever I can. Fred and Barney. — Steven Wright, comedian

■If Mick Jagger murdered David Crosby and Roger McGuinn, it would be a clear case of two Byrds being killed by one Stone. — Bob Phillips, Jokeblogger website

■Guys, I just saw the Rolling Stones’ tour bus! It was on the highway going 35 mph in the left lane with the blinker on. — Sonny Lee Smith, Jokeblogger website

■ “Gimme Shelter” (1969) The late British writer Mark Fisher defined “haunting” as “the staining of place with particularly intense moments of time.” In this haunted song’s moral universe, that place is America, that time is the late 1960s, and those opening notes superconduct an abiding cultural dread straight into my nervous system. Fracture, incipient collapse, the center unable to hold: all the great organ failures of that era, still resonant today in one of the very few rock songs that, says critic Greil Marcus, “the form itself was asking for all along.” OK, yes, I was only 7 when “Gimme Shelter” came out; I don’t know what to tell you except that, to my ears, history indelibly stained this song with the truth that in modern America a storm is always threatening. — Scott Dickensheets

■ “Sympathy for the Devil” (1968) Heavy metal slid from Rosemary’s womb fully formed — devil horns and all — in 1970 via Black Sabbath’s self-titled debut, the musical equivalent of a solar eclipse. In both sonics and spirit, though, the genre had its antecedents: in sound, it was the fuzzed-out riffs of Blue Cheer and the bluesy bluster of Led Zeppelin; and in dark, seemingly Satanic imagery, it was the Rolling Stones’ “Sympathy for the Devil.” Propelled by a samba rhythm, the bleak ballad was hardly an invocation for devil worship, as some pearl-clutchers thought at the time. Instead, it was a cataloging of some of humanity’s most horrific, self-inflicted moments, from Christ’s crucifixion to the Kennedy killings, a survey of the evil that men do — to each other. But penning the song from the devil’s perspective was a seriously audacious act in 1968, an embrace of dark themes that helped spawn a form of music darker still. — Jason Bracelin

■ “You Can’t Always Get What You Want” (1969): They’re known for their driving, two-guitar attack and some of the greatest electric riffs of all time. So of course the Stones’ best song is the one that prominently features an organ and that great rock ’n’ roll staple, the French horn. Literally nothing about this should work. The children’s choir. The chorus that reads as though it were intended for one of those inspirational posters that hung on the wall of your least favorite boss. Heck, the album cut is 7½ minutes long. It’s a testament to the songwriting alchemy of the Glimmer Twins that the experimental B-side to “Honky Tonk Women” has eclipsed that intended hit as something that needs to be experienced live. — Christopher Lawrence 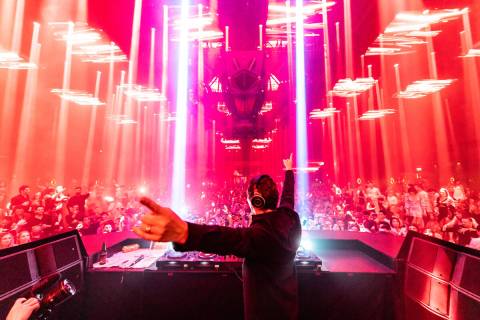 Zouk Nightclub and Ayu Dayclub is stacked with headliners and special-events artists for 2022. 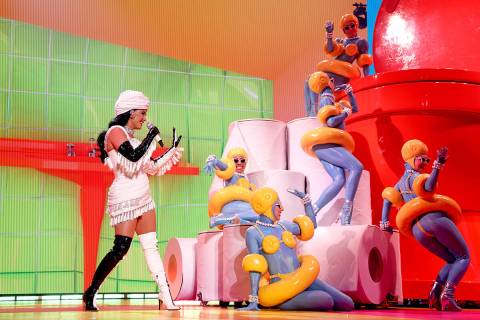 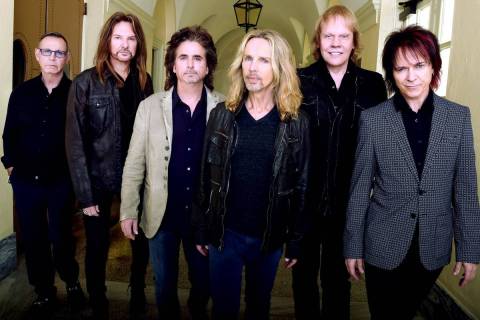 Rock superstars Styx and Nancy Wilson and comedians George Lopez and Bert Kreischer headline this week’s list of things to do in Las Vegas. 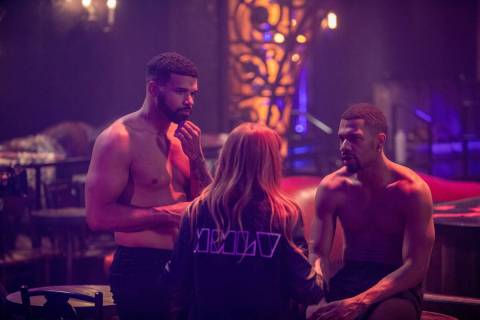 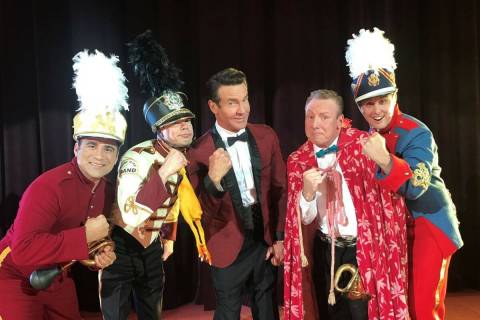 L.A. Comedy Club’s Dragon Room at the Strat has completed its move to the casino floor. Now, we laugh. 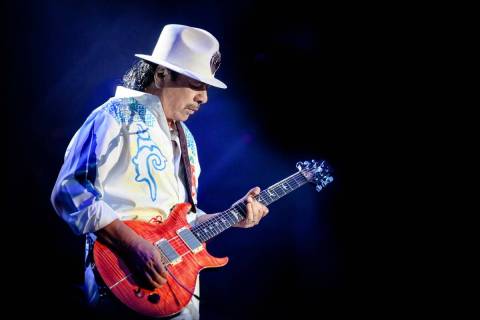 Carlos Santana is returning to the House of Blues at Mandalay Bay after he was forced to take a break after a heart scare in late November. 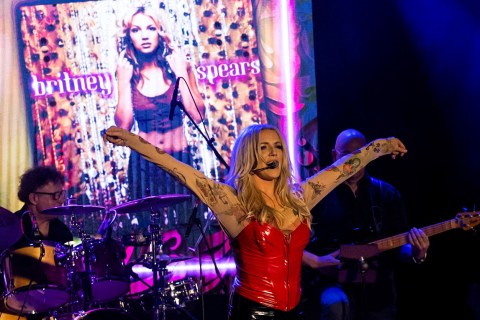 Mondays Dark kicked off its 2022 season with a “#WeFreedBritney” show Monday night at The Space. 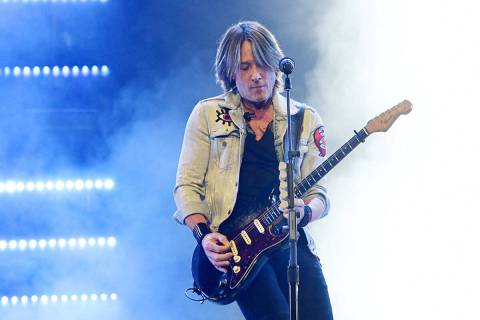 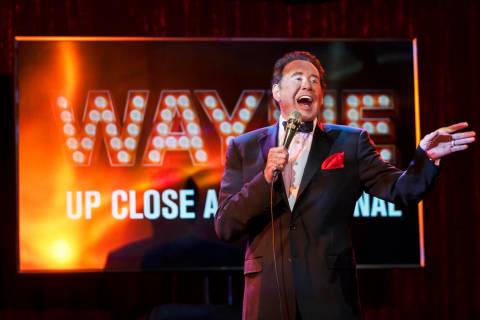 Wayne Newton was finally back onstage, ending a 23-month pause, at the Flamingo on Monday night. 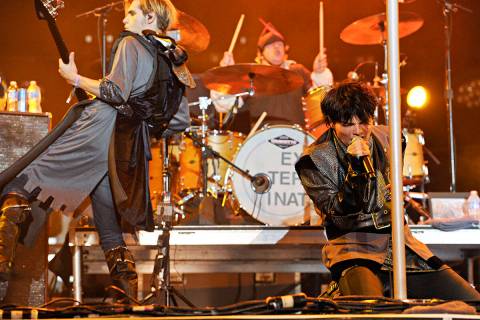 The much anticipated “When We Were Young Festival” has added a third day.