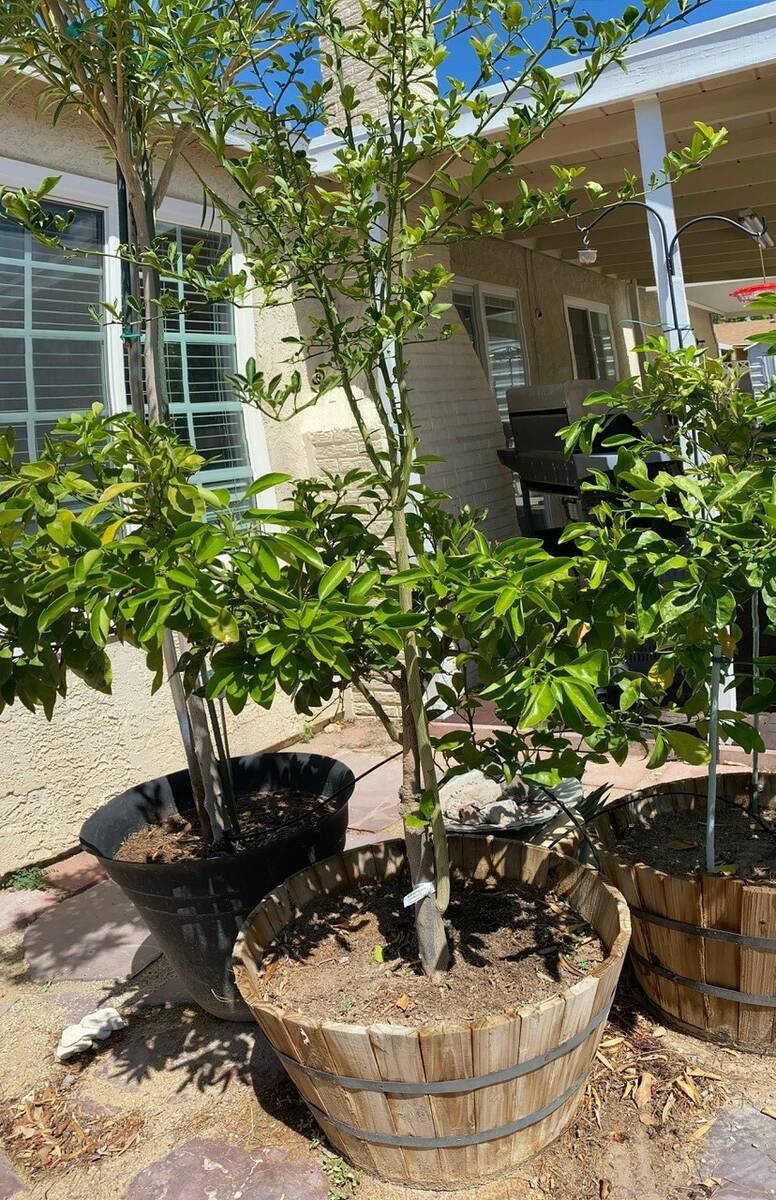 The root suck of this navel orange tree needs to be removed. (Bob Morris) 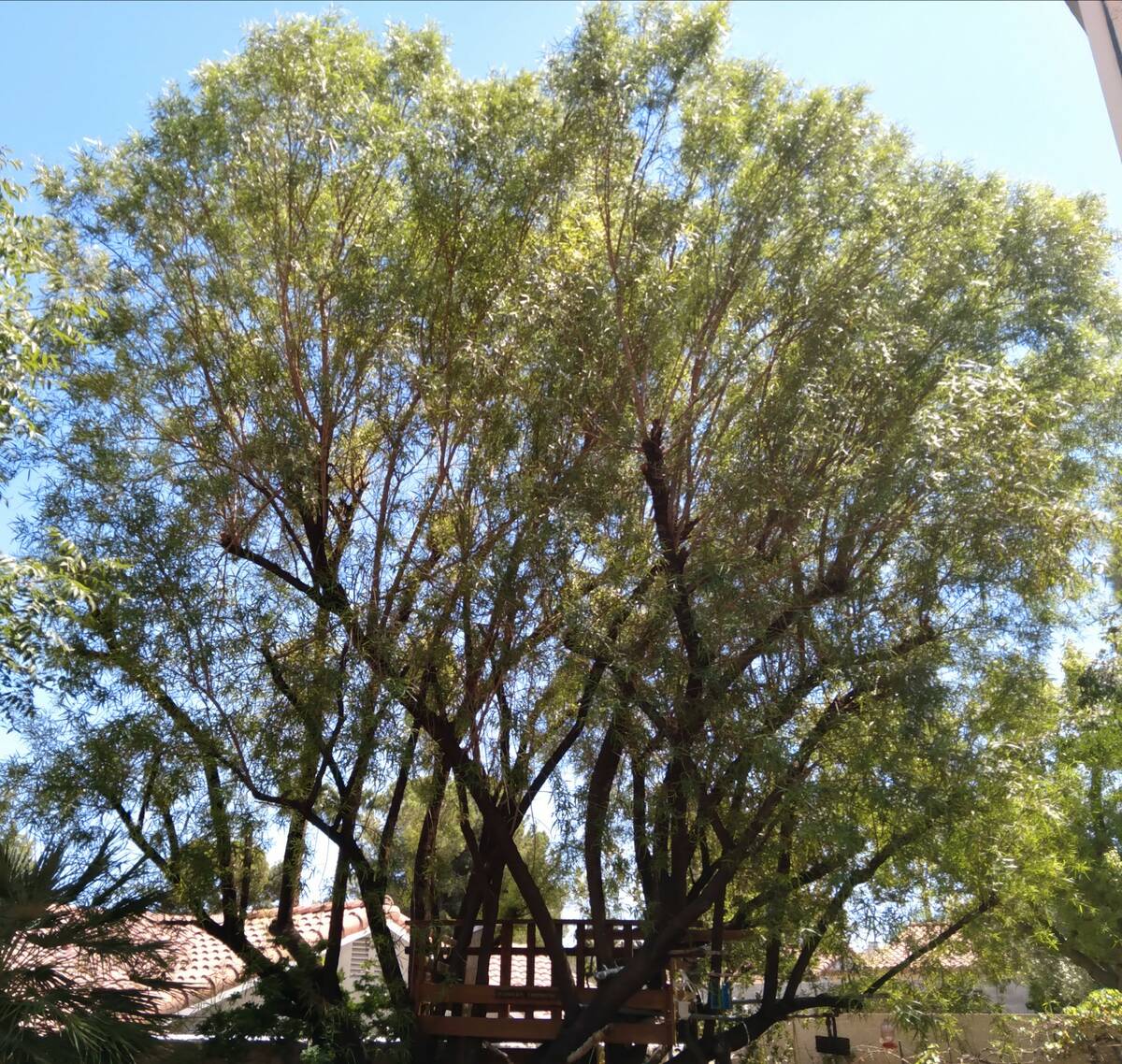 Large African sumac which would have its height lowered by “drop crotching”.

Many homeowners don’t know the names of plants in their yards or landscapes. Most can look at a plant and know if it is a tree, shrub or flower but not its name, much less how often it should be watered and with how much.

Lower-water-use trees, shrubs and flowers are watered less often. They should get the same amount of water when they are irrigated but don’t need it as often. That’s how xeric, or lower-water-use, plants operate.

One way to find out if an unnamed plant is xeric is to water it less often during the cooler months. If it starts looking bad to your eyes or dies, then it is most likely not xeric.

Size is another consideration. Big trees are seldom xeric. Xeric plants tend to be smaller. The bigger xeric trees and shrubs grow where water collects: arroyos, waterways and desert springs.

Big trees use more water than smaller trees. This is true even if you buy one that is small and it grows big when it gets older.

Q: Because of the continuing heat through September, when would we plant vegetables for our home gardens? What veggies would you recommend for the first planting?

A: The fall planting season is always uncertain. Weather phone apps help our guesstimates for about two weeks What is seen on vegetable planting lists are averages of the planting dates for that season. For each season you should look at the 10- or 14-day forecast from your phone app.

In the fall, the focus is on planting cool-season (winter) vegetables. It’s kind of a misnomer because there are no such things as cool-season and warm-season vegetables. That is a human invention to categorize the vegetables we eat.

Plants grow best along a continuum from 45 to 90 degrees. Some plants grow better during cooler weather and others during warmer weather. Humans divided vegetables into these two groups.

Use your phone app to pinpoint when to plant by looking at the following 10 days of weather. Soil warmth isn’t a problem in the fall like it can be in the spring. Sometimes in the spring, the soil must be warmed first to get growth from some of the warm-season vegetables, such as tomatoes, peppers, eggplant and watermelon. In cooler soils, they just sit there, wonderful-looking, with no growth.

We are now transitioning to the cool-season vegetables, so warm soil is a blessing for them. Again, not like spring with its cooler soils. Start with the so-called warm-season vegetables first.

Because you are planting in the fall when soil temperatures are warmer, you can normally subtract five days from the production time on the packet (i.e., instead of 70 days for production, use 65 days) if you get it in early enough and wind is not a problem.

Q: I have a 20-year-old African sumac nearly 30 feet tall which provides great shade in my backyard. It needs another pruning when it cools off. I did a major cutback last fall at the request of my neighbor because of leaf drop. Any suggestions on how best to do so and keep the shade and cooler temperatures it provides?

A: Two things you need to know if you are doing this yourself: drop crotching and how to do a 1-2-3 pruning cut.

Stand away from the tree so that you can see all of it. Identify the limbs giving you the problems. Trace the limbs back to a lower crotch. A crotch is where at least two limbs come together. This is where the pruning cuts and lowering will be done.

During cooler weather remove the limbs that are offensive. Use a 1-2-3 cut to avoid stripping the bark from the tree. A 1-2-3 cut is done first by making an undercut 6 inches from a limb to about ⅓ of its diameter.

The second cut is made outside of the first cut. Attached bark may strip down to the undercut, or first cut, so the falling limb will not tear the remaining limb and tree trunk. This is why the undercut is made first.

A third cut is used to finally remove the remaining stub. It is a finished cut. The third cut is the smallest cut made that removes most of the stub remaining so the cut heals faster.

If you have never done it, for safety reasons and a better-looking tree, hire a certified arborist to make these pruning cuts so that it will make the tree smaller and keep it beautiful. Part of your payment is for decisions that result in a prettier tree than you could have done.

Q: Do you have any recommendations for pruning our poorly maintained navel orange tree? The main trunk has grown to about 34 inches from the ground and leafed and branched out. Last season a sucker shoot sprouted from the side of the truck and wasn’t pruned out. Now it exceeds 8 feet but seems extremely happy.

A: That sucker is part of the rootstock and not part of the tree. You don’t want it to stay. It should have been removed when you first saw it.

See how the leaves growing on it are different looking from the mother plant? Not only that, the growth from it was so rapid the crotch makes a narrow letter V. It will not support the weight of itself, plus its fruit, as the tree gets bigger.

This type of branch will split from the tree. Not only that, this unwanted growth robs the rest of the tree of food that it makes as it gets larger and denser. Remove this sucker now and don’t leave a stub attached to the trunk when you do. If growth is a size that hand pruners can remove, then do it anytime.

The most likely reason your fruit has fallen from the tree is because of early winter and spring freezes. The flowers froze, unpollinated, and the fruit then died and fell off. This result can change from year to year depending on early spring freezing temperatures.

Keep in mind this is a navel orange and not the best choice for our Las Vegas climate. A better choice would be a Satsuma orange (tangerine) because of our cold winters. The tree can still lose fruit due to early spring freezing temperatures but at least you won’t lose the whole tree. However, placement in the right microclimate for either orange type, navel or Satsuma may make a difference.

For navel orange, place it in the warmer microclimate of your landscape such as a south or west side. It needs protection from winter cold to survive.

The more cold tolerant Satsuma would be placed in a colder microclimate, such as the north or east side, of the landscape. This placement delays the flowering of this tree as long as possible. Your choice with on what you want to keep, but my vote is for changing to a Satsuma. 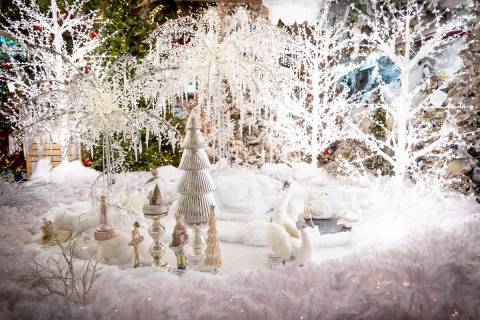 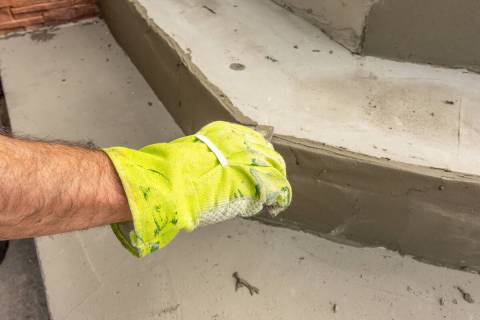 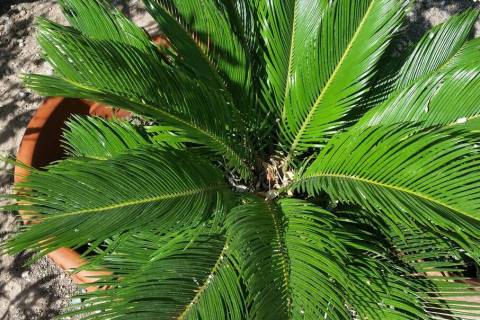 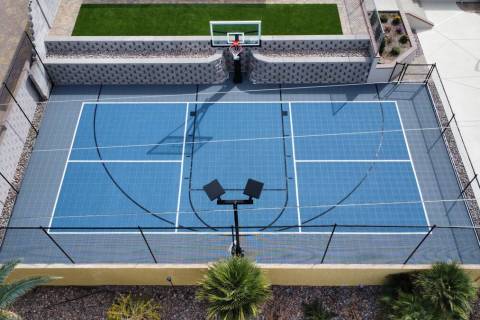 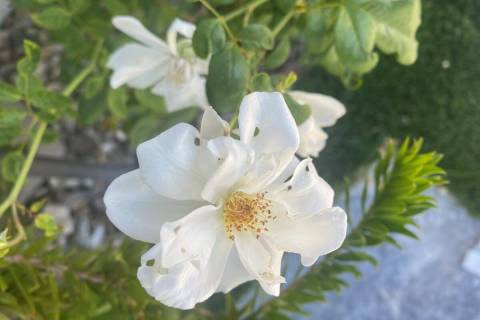 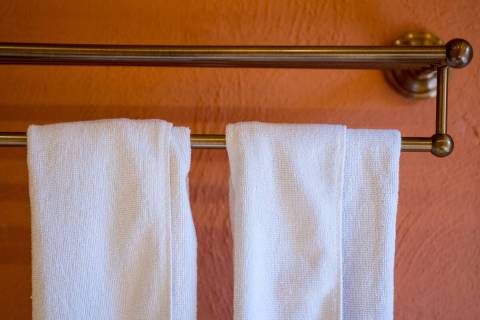 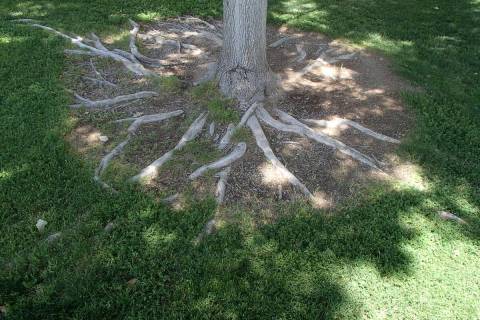 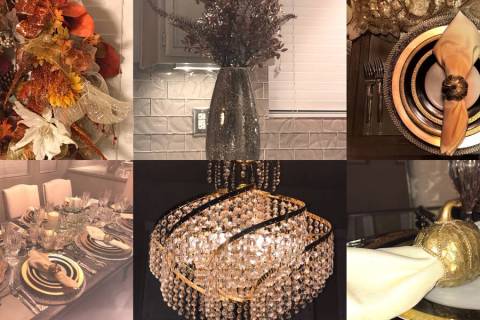 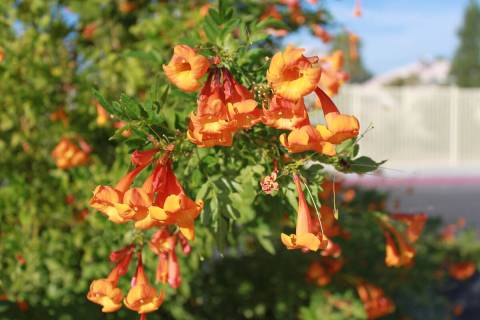 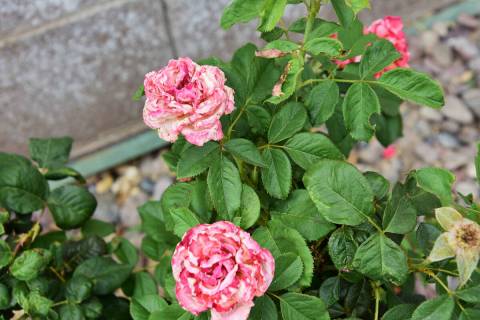