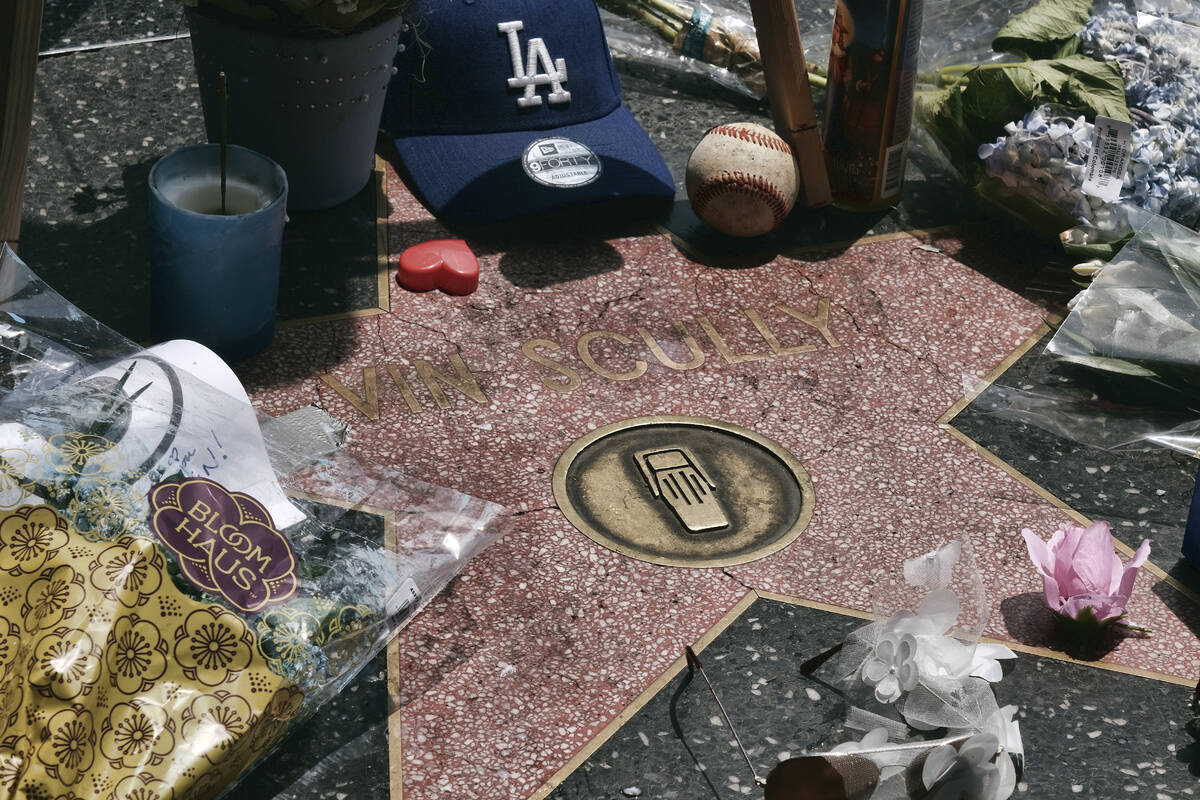 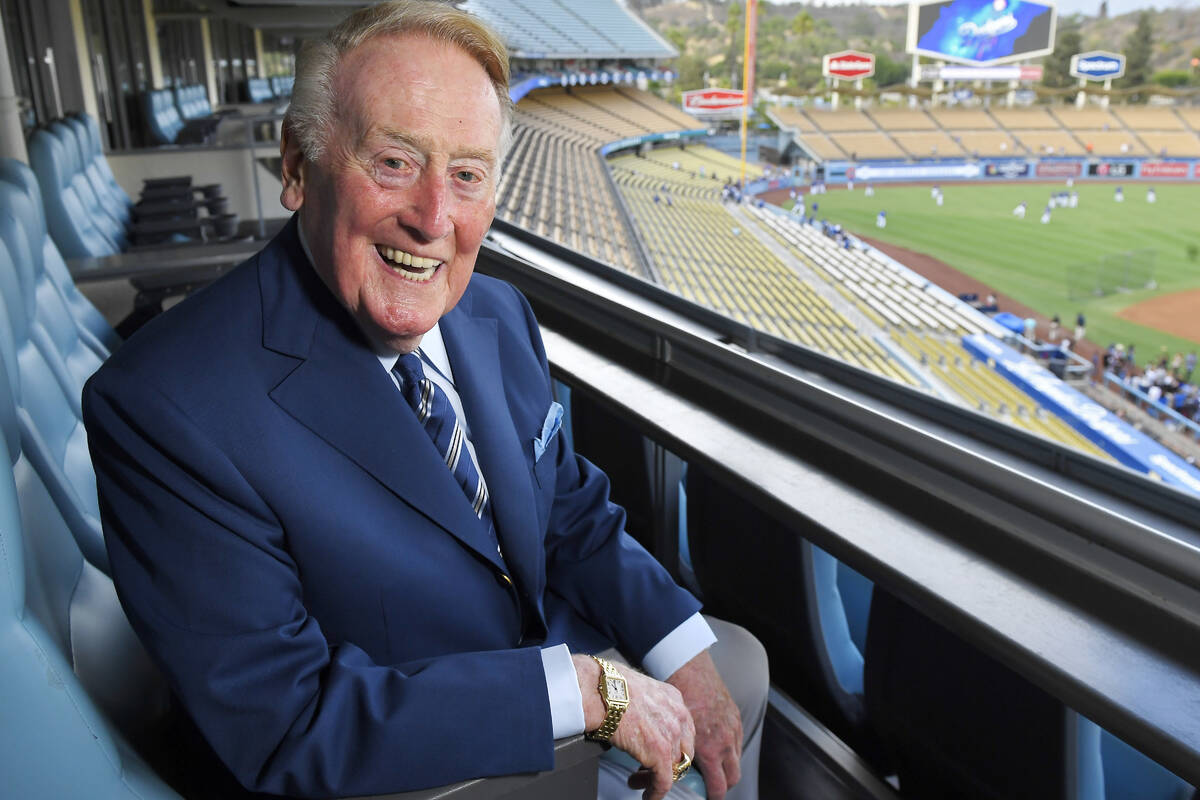 In this Tuesday, Sept. 20, 2016, photo, broadcaster Vin Scully poses for a photo prior a baseball game between the Los Angeles Dodgers and the San Francisco Giants in Los Angeles. (AP Photo/Mark J. Terrill) 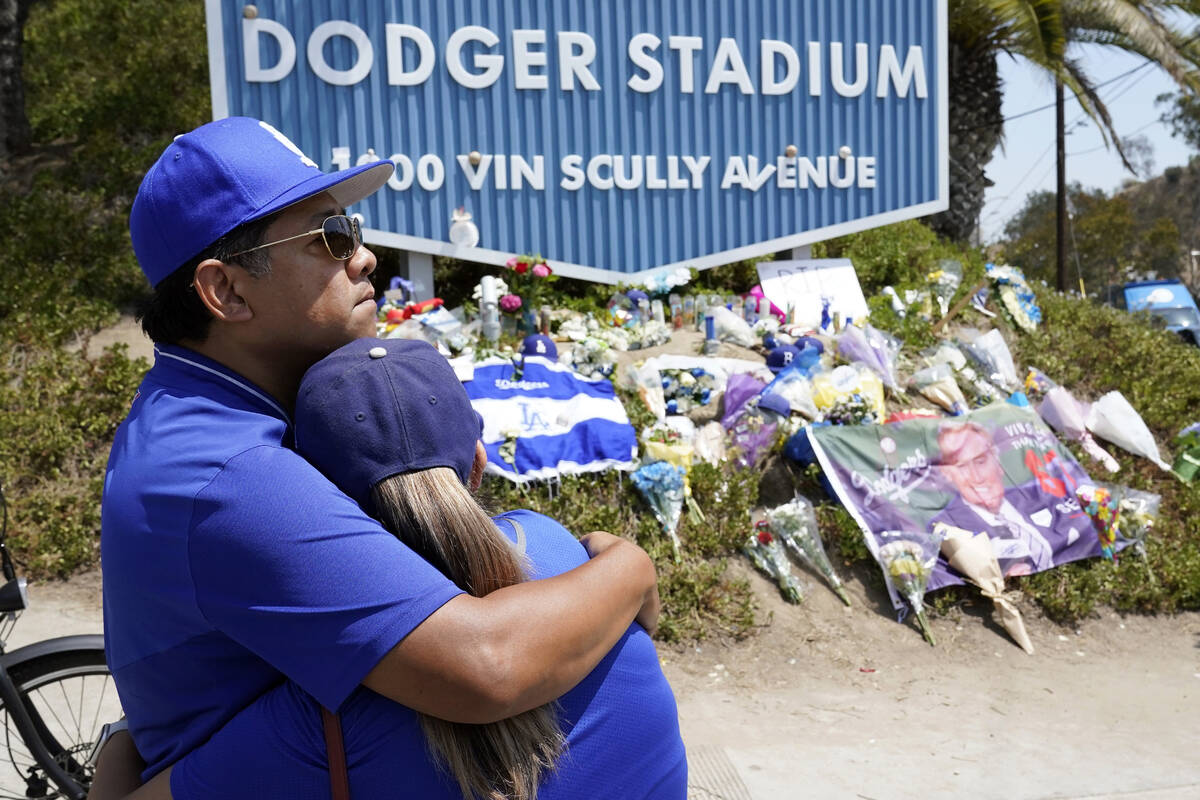 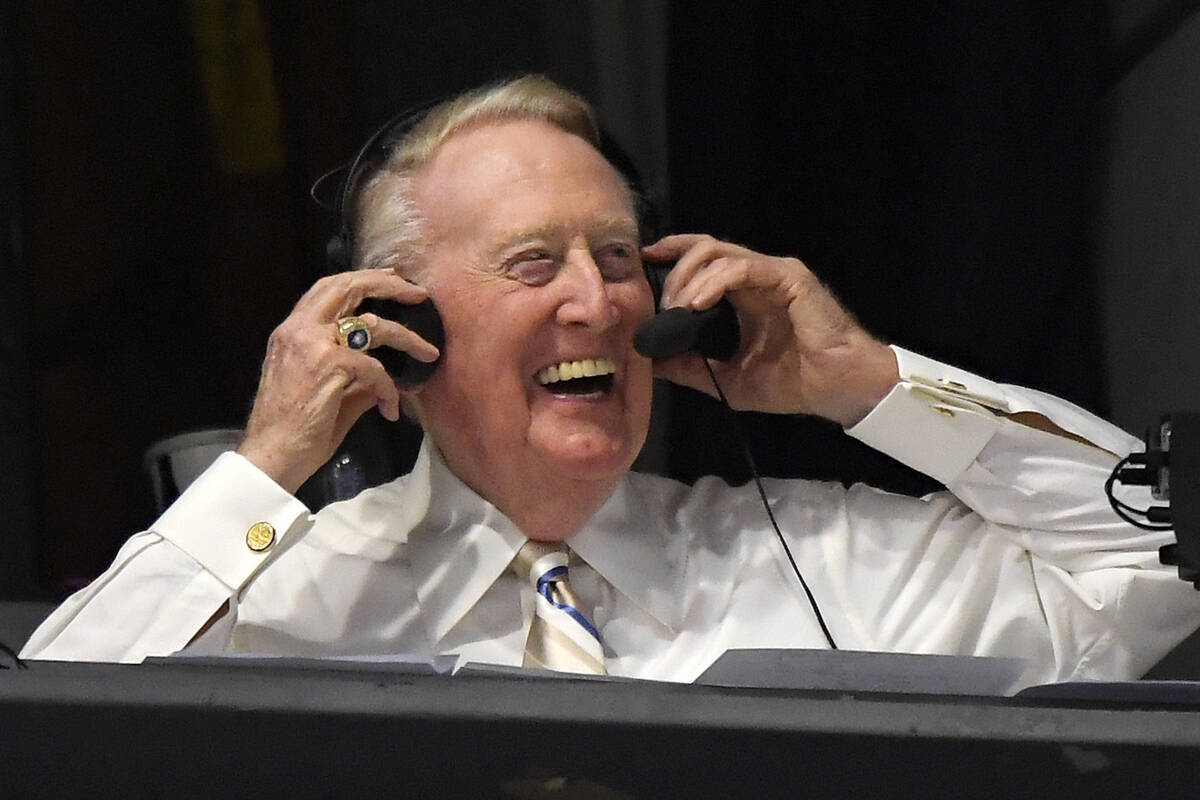 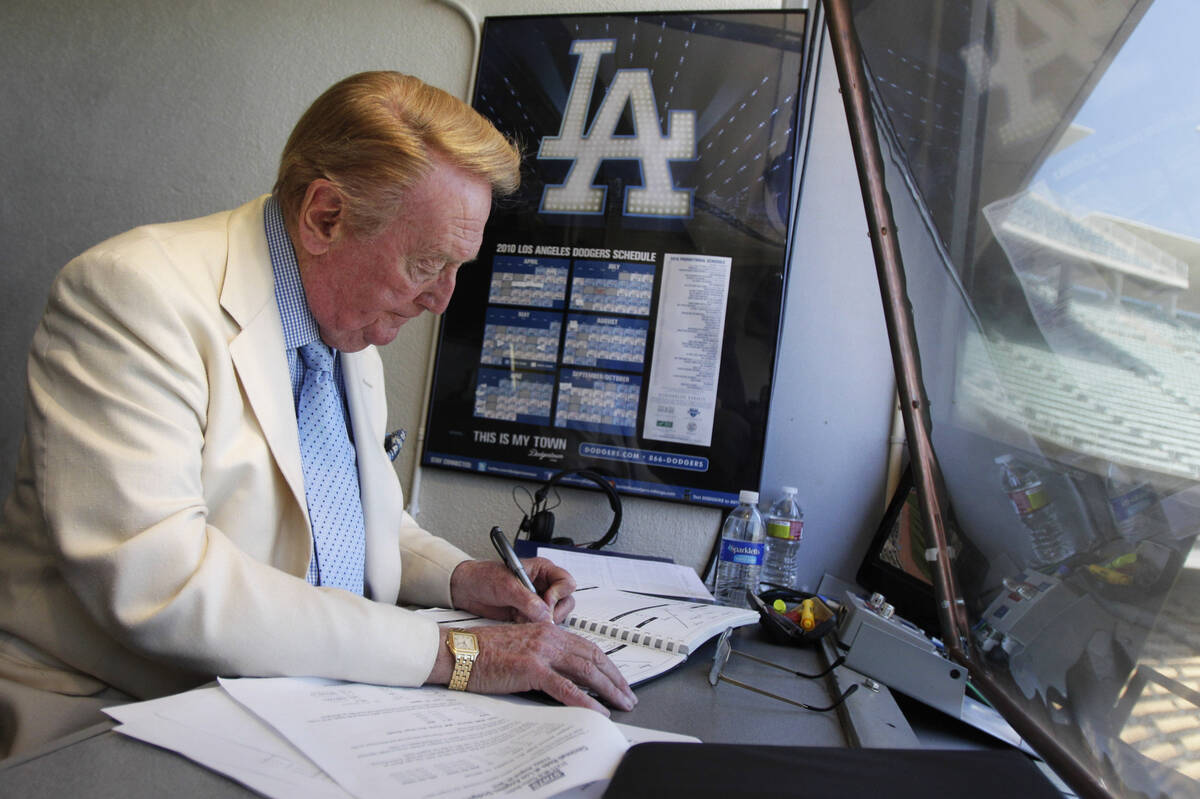 My main story would be like tens of thousands, complete with the clock radio and falling asleep as a kid to the wondrous voice of Vin Scully.

But here’s one reason I believe Scully — who died Tuesday at the age of 94 — transcended generations.

It was several years ago when I was watching a game on television and Scully was in the midst of another brilliant moment of spinning a fascinating tale while calling play-by-play at the same time.

And from the other room, my wife wondered: “Who is that?”

I then had the pleasure of telling her all about Scully. And in that instant, I understood what made him so remarkable.

That no matter one’s knowledge of baseball, he was able to impart a sense of wisdom and entertainment that mesmerized those listening. Pure genius.

“High fly ball into right field — she is gone!”

Vin Scully. Gone but not forgotten.

“He was the most trusted public figure in Los Angeles history. He was this golden bridge between a fan base and a team. Talking to (former players) Rick Monday and Steve Garvey and Jerry Reuss and others, they could hear the broadcast on the field because so many people had their radios on in the stands listening to Vin.

When Reuss was on the mound one time, he had to step off the rubber because he knew Vin was telling a story.

Vin called me last summer — I was driving back from Las Vegas to Los Angeles— when I was on the phone with my wife. After I hung up with her and listened to the voice mail, I knew from the first word who it was. He left me a wonderful voice message. I only have three that I ever saved — two are from each of my parents so I can still hear their voices and the other is from Vin.

I listened to it again this morning a few times just to hear his voice. You looked forward to going to Dodger Stadium because you were going to see Vin and he was going to use your name. The fact he would say your name was mind-blowing, especially the first time.”

“I knew Vin for 34 years and counted him as a friend. I met him in 1988 when I got hired by the Dodgers to work at Dodgertown and then be their play-by-play announcer for the Class A team in the Florida State League.

I wouldn’t be here and doing this for a living if it wasn’t for Vin Scully. He inspired me. When I first saw a Dodgers game in 1968 at 8 years old, I heard his broadcast reverberating throughout the stadium. I looked up at the booth. There he was on the air, taking a sip of water, and I’m thinking, ‘What an amazing way to earn a living.’

I didn’t just learn baseball from him. I learned how to command the language. He was not just a baseball broadcaster — he was a teacher, he was a father, he was a pastor — he was any number of things at any given time. A complete inspiration.

I’m just lucky to have known him personally, because there are millions of people out there who would have loved the opportunity to say, ‘Vinny, thank you for everything you did.’

As great of a broadcaster as he was — and he was unmatched as far as I’m concerned— he was a better human being.”

“While growing up in Phoenix, I was far from a Dodgers fan. The city’s Triple-A team was the Phoenix Giants, so I thought I had to root for the San Francisco Giants.

Yet, the biggest radio station in town, KTAR-AM (620), carried every Dodgers game. It was perplexing to me, but it wasn’t a bad thing.

I hated the Dodgers but I loved listening to Vin Scully. My dad wasn’t a sports fan. That meant Vin taught me baseball. He opened my eyes and ears to complete games and no-hitters and closers and squeeze plays and loops down the left-field line.

I knew my Giants from magazines, but I knew about Steve Yeager and Steve Garvey and that Mike Marshall was the “fireman” from Vin. I went to sleep many evenings after hearing Vin promoting Farmer John hot dogs. ‘Easternmost in quality, westernmost in flavor.’ If you know, you know.

Thank you, Vin. I still hate the Dodgers, but they were just a vehicle for you to teach me about a wonderful game.”

“I remember going to games in the (L.A.) Coliseum when I was just a kid and you’d be so far from the field but there were all these transistor radios at the ballpark and you could hear Vin no matter where you went.

He taught us all the game. It was the perfect marriage of the development of the L.A. freeway system and the terrible traffic, with the new team coming in and the ultimate baseball voice.

I remember the Koufax perfect game in ‘65 and the top of the ninth inning — if you go back through some of the anthologies, some of the greatest baseball writing of all time, they actually had the transcript of Vin’s call in the ninth inning. It just spoke to his brilliance.

I remember introducing people to him, and it was the thrill of their lifetime to meet him. That was what it was like for me to do that first interview with him. I just couldn’t believe that this voice that was coming out of my radio for all these years was sitting next to me, speaking into my microphone.”

“On August 1, 1974, my parents and grandfather took me to my first major league game at Dodger Stadium. We sat in the now long gone seats in the third tier where there are now suites and the Stadium Club, and where the press box and broadcast booths long have been.

The great part was that my parents had written ahead to my idol, and (Scully) responded, ‘Bring him up to the booth.’

The door opened, and the guard crooked a finger at me. This man looked down at me and said, in that incredible voice, ‘So you’re the guy who wants my job!’ He shook my hand, brought me in, introduced me to (fellow broadcaster) Jerry Doggett, did the pre-game opening … and then very nicely shooed me back out.

I never said a word. It’s hard when your jaw is hanging.”

“I’ve interviewed thousands of people, the powerful, the not-so-powerful, but I’ve never really been intimidated by anyone — except when I was in the broadcast booth with Vin Scully before a game. Literally, he was the soundtrack of my life. I started listening to him when I was six or seven years old and for the next 50-some years. Vinny was always there.

To actually meet him, and see how gracious he was, and see that he was everything that I thought he was — usually people aren’t. It was during the Barry Bonds home run chase, and I wrote a column about it. It was a career highlight for me — and imagine my surprise when just a few weeks later, here’s this handwritten note that comes in the mail, thanking me.

Imagine that, Vin Scully thanking me for interviewing him — when I should have been thanking him for everything that he has meant to me in my life.”

“I remember sitting on the plane with him, and we were talking about breaking bad habits, and Vin said he had quit smoking — like the rest of us, he used to light up all the time.

He said he wanted to see his little baby grow up.

That really impressed me, beyond him having that great voice and baseball mind.”

“It was one of the first times I had stepped foot in a major league press box so I was sheepishly looking around for a coffee or Diet Coke when I saw him holding court in the media dining area.

I heard the voice before I saw his face and knew right away it was Vin Scully. I was at Dodger Stadium covering the first MLB series of Las Vegan Bryce Harper for the Review-Journal and Mr. Scully was regaling reporters with tales of some of the most memorable debuts he had called during his illustrious career.

I stood back away from the group and eavesdropped on the monologue, not wanting to get too close and press my luck out of fear I’d be exposed as having no business being in the vicinity of such an institution. When he looked at me, I prepared myself to be escorted away.

Instead, he asked who I was and invited me to sit down. I wish I remembered the details of his stories. I don’t. I was too in awe. But I will never forget how genuine that man was when he had no reason to be at all. A true gentleman and legitimate legend.”

“I started covering the Dodgers in 1960, and my first week when I was a rookie reporter, I got there early like you were supposed to during batting practice. And he walks over to me and says ‘I’m Vin Scully’ and I said, “Yes sir, I recognize you.’

He was just as nice as can be. And he said, ‘Let me give you a pointer: If you’re ever asked to go on the road with the team, do not play gin rummy with the players, because they’re all card sharks.’

The Dodgers had their own plane in those days, and the first time I traveled with the team, I thought it was a good way to gain the trust of the players. So I went ahead and played anyway.

“Gil Hodges and Frank Howard took all of my travel money.” 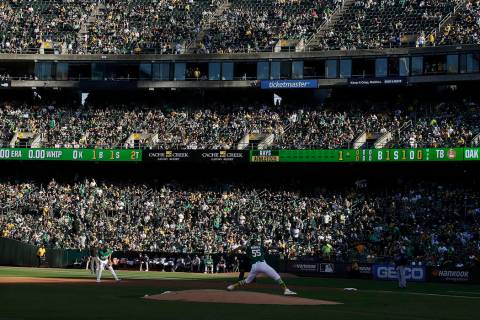 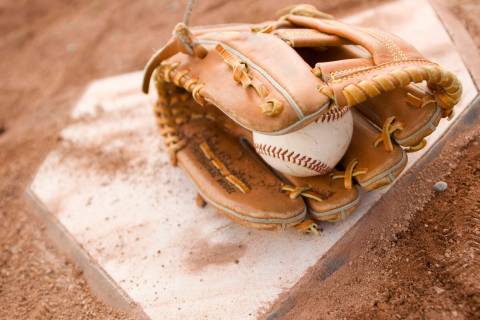 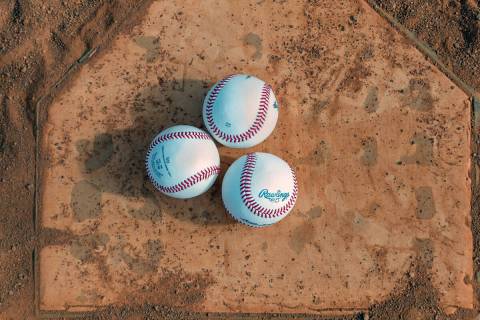