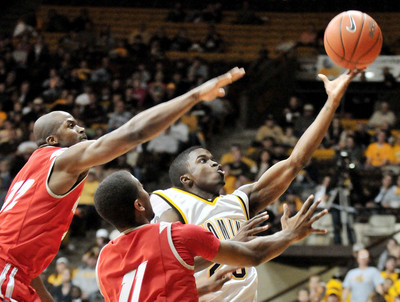 Ewing, a 6-foot-2-inch guard who leads the conference with an 18.6-point average, is the second player in MWC history to score 2,000 career points. On Wyoming’s career list, his 2,113 points rank second to Fennis Dembo’s 2,311.

The sixth-seeded Cowboys (18-12, 7-9 MWC) play third-seeded New Mexico (21-10, 12-4) in the tournament quarterfinals at 8:30 p.m. today. Ewing wants to stick around for Friday’s semifinals, but even after he’s gone, he said the tournament should continue to play on or near the Strip.

"It should stay in Vegas," Ewing said. "They could move it to a casino, maybe the MGM Grand or something like that, but (the Thomas & Mack) is just like Madison Square Garden. It’s time to put on a show. If you don’t bring your game in Vegas, you’re not a basketball player."

The tournament will be at the Thomas & Mack again next year, completing the four-year contract. Where it will be held after that is uncertain.

Ewing said although UNLV has an advantage by playing on its home court, "At the end of the day, if you put the ball in the hole and stop the other team, you’ll win.

"This year is going to be interesting. One through six, any team can win it. Everything is pretty much even. I believe the Mountain West has changed a lot, and it has changed for the better. It’s rising up to battle with the high-major conferences."

New Mexico coach Steve Alford, an outspoken opponent of holding the tournament at the Thomas & Mack, said in October he would have "no problem" with the event staying in Las Vegas but at a different venue.

Alford and the league’s other head coaches are united in at least one cause this week — lobbying for the Mountain West to get four teams into the NCAA Tournament.

"I think you have a few of the (major) conferences that are really down this year," Alford said. "If you look at the Mountain West, our league is up. Our league has really taken a huge bump in the right direction, and we should be rewarded for that."