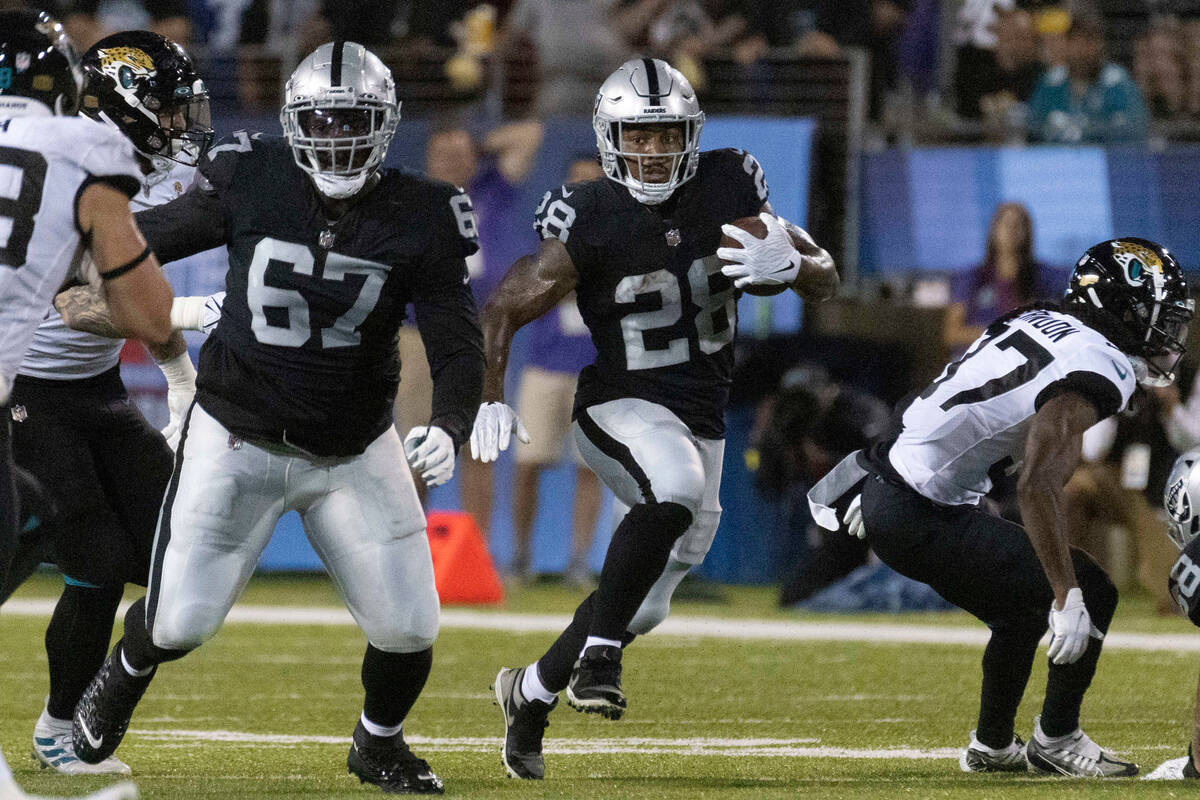 Raiders guard Lester Cotton Sr. (67) blocks as Raiders running back Josh Jacobs (28) finds more room to run against the Jacksonville Jaguars during the first half of the NFL Hall of Fame game at Tom Benson Hall of Fame Stadium on Thursday, Aug. 4, 2022, in Canton, Ohio. (Heidi Fang/Las Vegas Review-Journal) @HeidiFang 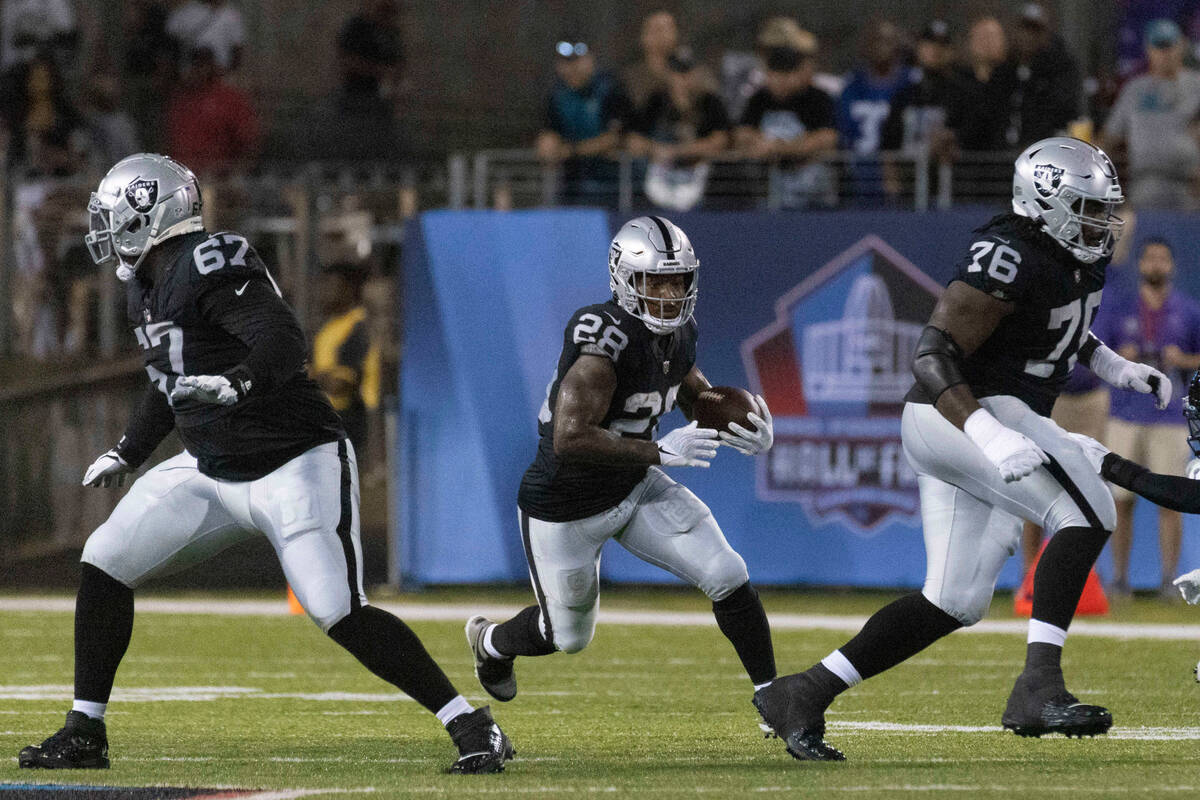 Raiders running back Josh Jacobs (28) rushes during the first half of the NFL Hall of Fame game against the Jacksonville Jaguars at Tom Benson Hall of Fame Stadium on Thursday, Aug. 4, 2022, in Canton, Ohio. (Heidi Fang/Las Vegas Review-Journal) @HeidiFang

The Raiders opened their preseason with a mostly crisp 27-11 win over the Jaguars on Thursday. As first preseason games go, the performance was generally positive. But some sloppiness along the offensive line has left their fans with some questions.

raider rocker (@raiderrocker18): What do the Raiders seem to see in Brandon Parker — even giving him a raise — that never seems to show up in games?

VINCENT BONSIGNORE: Parker signed a one-year deal worth a total value of $3.5 million, which lands 51st among his offensive tackle peers in the NFL. As a second contract for a fifth-year player, it generally reflects that of a borderline starter/swing tackle-type player. Which is what Parker profiles to be.

In that sense, the Raiders see him no differently than many teams do.

In the Raiders’ perfect world, Alex Leatherwood secures the starting right tackle position opposite Kolton Miller, with Parker becoming the backup behind each player. If he can pull that off, he provides adequate value relative to the cost.

Here is the issue: While Leatherwood had a promising start to his second year on Thursday, he still needs to prove he can handle the responsibility of being the starting right tackle. The rest of training camp and the preseason will determine whether he can.

Meanwhile, Parker’s struggles against the Jaguars at left tackle raise some genuine concern. As a swing tackle, he could get dropped in at left tackle on a moment’s notice. If he can’t handle that position, at least at an adequate level, it creates tremendous vulnerability for the Raiders.

Parker has some time to show he can be trusted, but you wonder if Thursday’s lackluster performance motivates the Raiders to looking outside their building for better options.

Ryan Moore (@coachmoore_pes): Is there any need to worry about the Raiders shopping Josh Jacobs after playing him so much last night?

VB: Raiders coach Josh McDaniels said he likes to play his running backs in the preseason to better get them acclimated to the physicality of game conditions. That is an element that isn’t available in practice because of the non-tackling mandate to preserve players.

That, coupled with the Raiders’ need to build chemistry between their running backs and offensive line — a factor that really hurt the run game last year when it took an inordinate of time for everyone to get on the same page — seemed to motivate McDaniels’ decision to play Jacobs in the first preseason game.

Anything is possible in terms of a trade, and the Raiders deep running back room makes that position a natural to tap into if the Raiders want to utilize a strength to beef up a weak area.

For now, though, it feels like the value Jacobs provides the Raiders outweighs the potential return he’d bring back in a trade.

Also, keep in mind that the Raiders’ decision to decline to pick up Jacobs’ fifth-year option doesn’t mean he isn’t in their long-range plans. They can still sign him to a new deal after this season.

Even more importantly, it doesn’t mean they don’t stand to benefit if he has a big year and signs a deal with another team at the end of the season. In that scenario, the Raiders will be in position to get a comp draft pick.

Hook Jr. (@DominionRaider): Is the Lester Cotton hype legit, or is the offensive line rough enough that he’s standing out in comparison?

VB: Based on his performance on Thursday, Cotton’s arrow is absolutely pointing up.

El Migu (@MiguelSanRoma12): What’s the deal with Chandler Jones?? Where is he?

VB : Jones has been dealing with an undisclosed injury, forcing him to miss practice last week and skip the trip to Canton. As of right now, there is no sense that it is something overly serious.

OlyRaider (@Raiders8113): What are the chances the Raiders add a defensive tackle?

VB: The Raiders are counting on the return of starting defensive tackles Johnathan Hankins and Bilal Nichols, which will push their replacements into reserve roles and strengthen the depth of that position. However, if the injury absences of Hankins and Nichols extend longer than expected, they will be forced to add reinforcements.