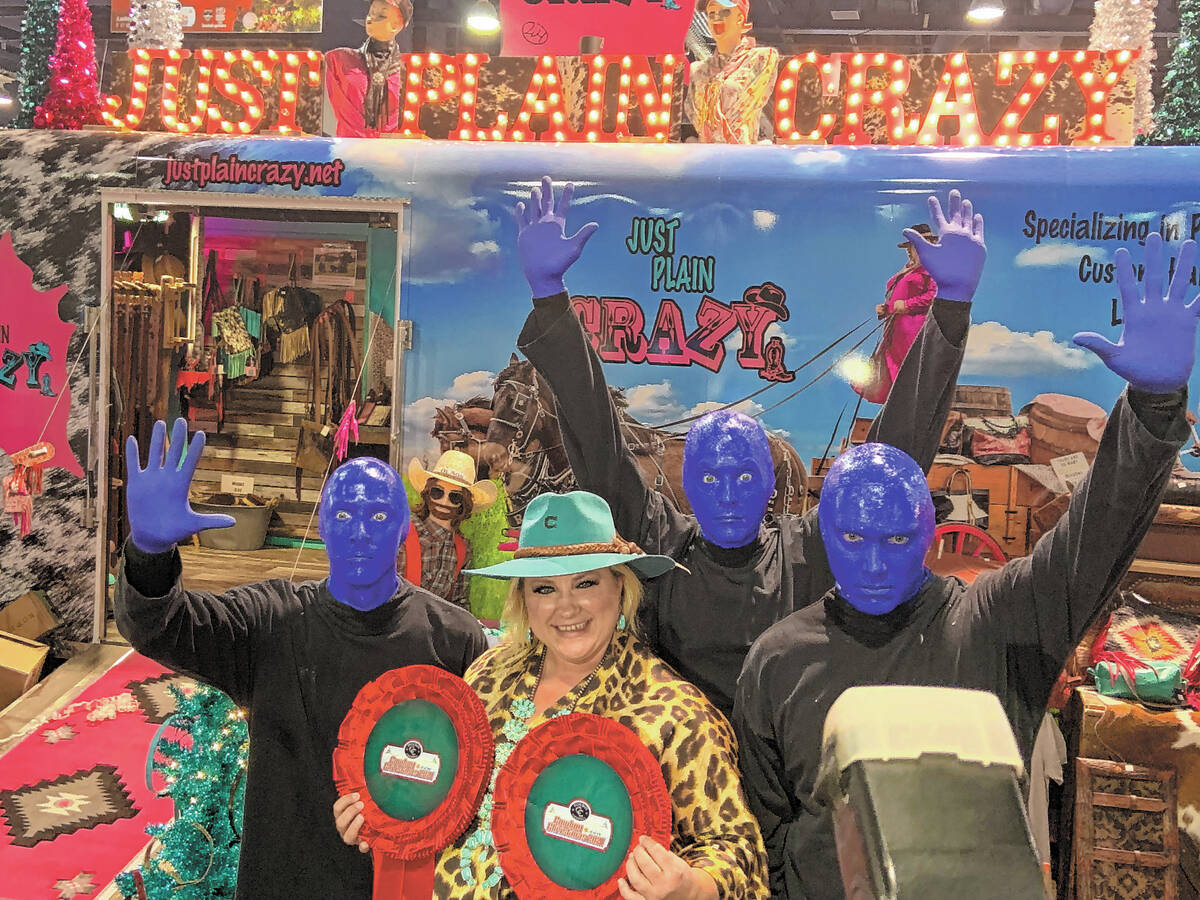 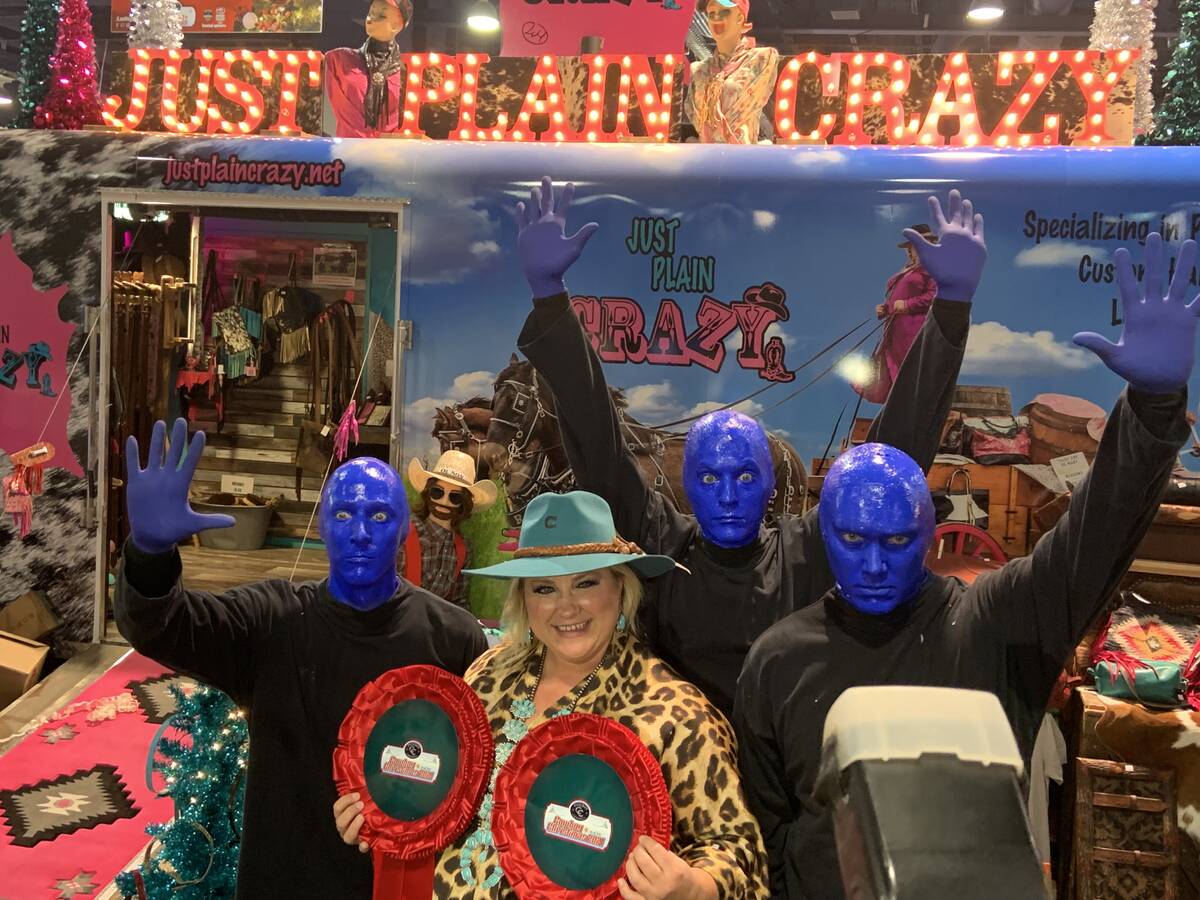 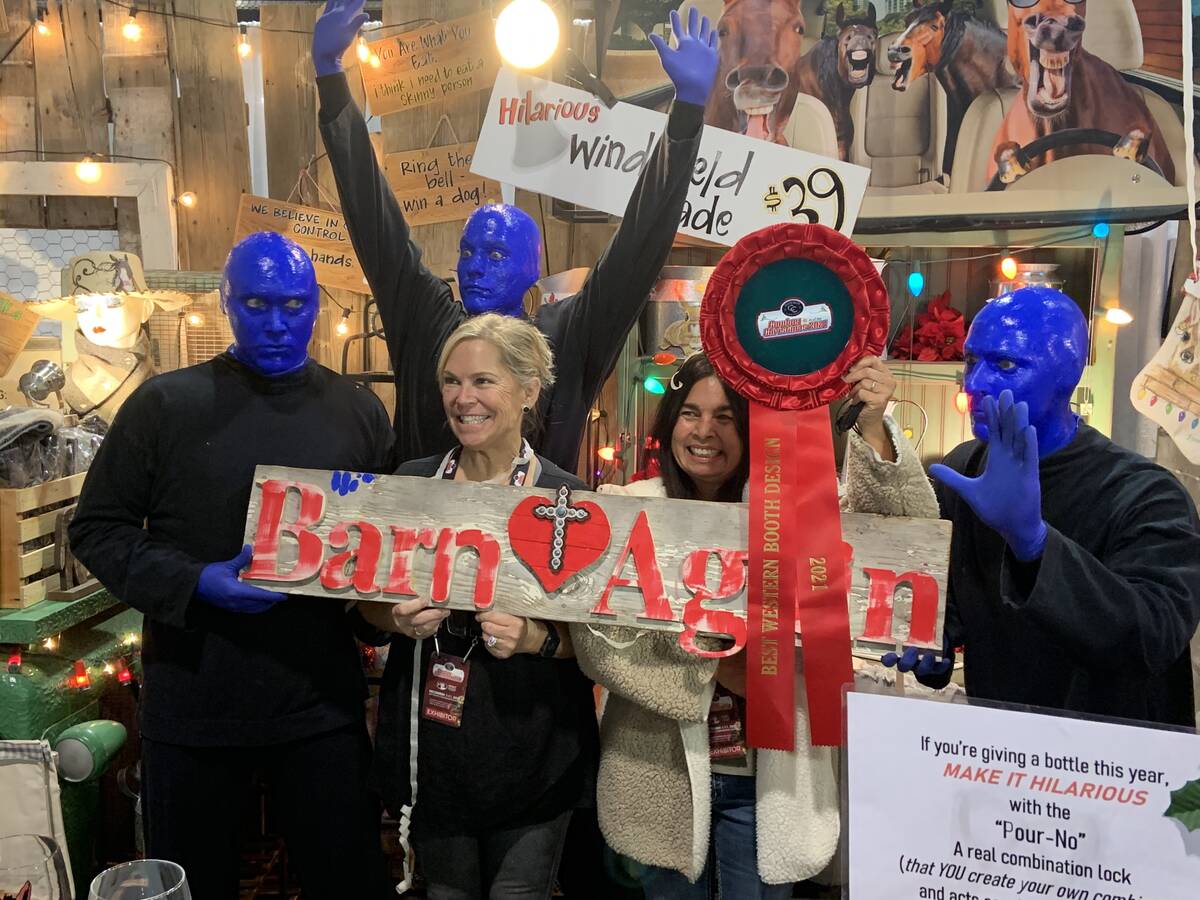 Blue Man Group poses for a celebratory photo Thursday with, from left, Renae Rosa and Helen Peters, after Rosa and Peters' Barn Again was chosen the Best Western-Themed Booth in The Cowboy Channel Cowboy Christmas Best Booth Contest. Photo by Patrick Everson/Special to the Review-Journal 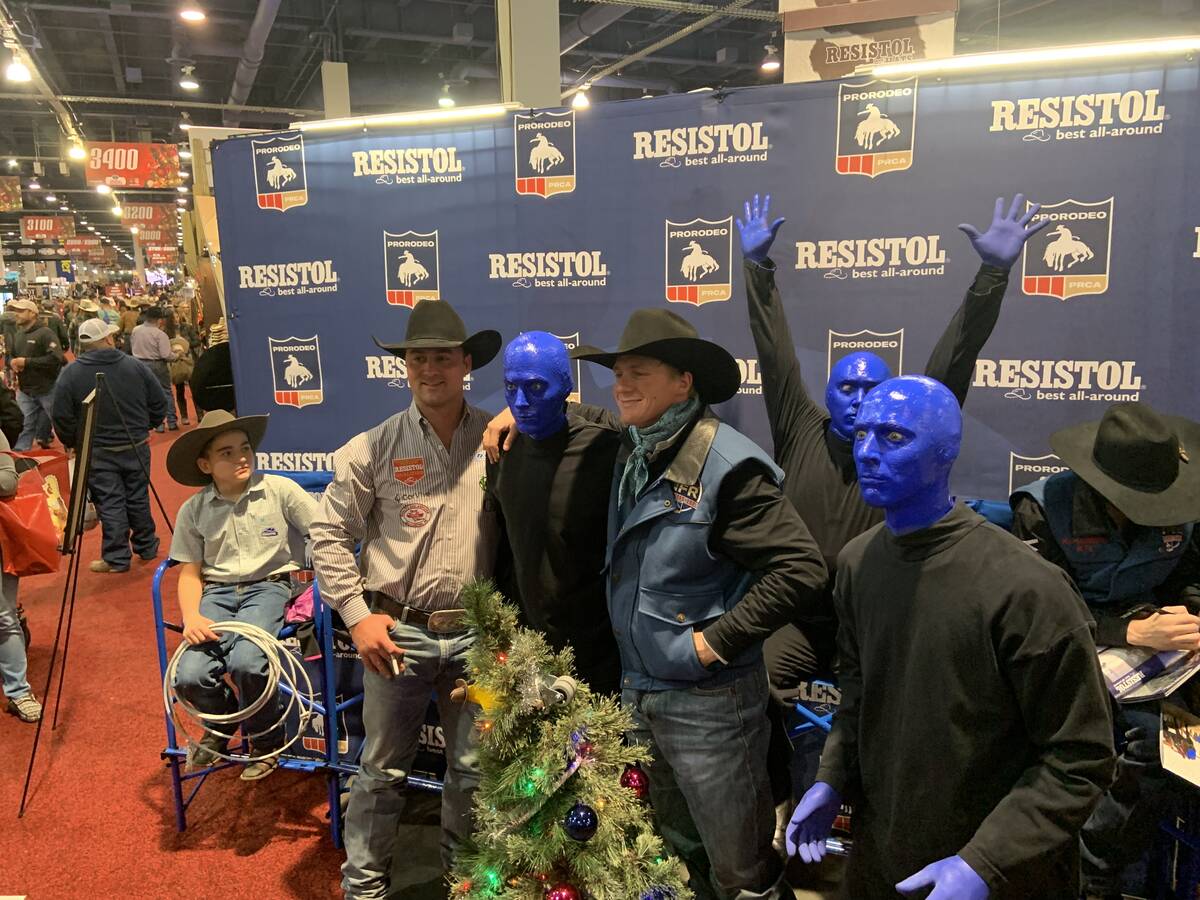 Wrangler NFR contestants [TO BE ID'D SHORTLY; DON'T HAVE NAMES YET] take a break from an autograph signing session to get a photo with Blue Man Group on Thursday at The Cowboy Channel Cowboy Christmas, inside the South Halls at Las Vegas Convention Center. Photo by Patrick Everson/Special to the Review-Journal

When Blue Man Group suddenly appears, you know something interesting is about to happen. Maybe something a little wacky.

Or maybe something really good.

For two booth exhibitors at The Cowboy Channel Cowboy Christmas, it was all of the above.

“It’s my first year in Vegas at Cowboy Christmas. I have no idea what’s happening. And then these blue people show up,” Jennifer Watchous said.

Just Plain Crazy, under owner and designer Watchous, cleaned up in the first year that Cowboy Christmas held a Best Booth Contest. There were three categories: Best Western-Themed Booth, Best Holiday-Themed Booth and Best Overall Booth. Over the past week, expo-goers voted on their favorite booths. The top six vote-getters then went through a review by the expo’s decorating committee, which made the final decision on winners Thursday afternoon.

“I had no idea they were even doing a booth contest. People were telling me about it, saying ‘You’ve got to enter.’ So I did, and look what happened,” Watchous said. “As you can see by my shop’s name, I’m just plain crazy. I come up with crazy ideas, and I guess they’re winning ideas. I just can’t believe I won both of them.

“Many months went into this, and I’ve got a great team. I sure couldn’t do it without them.”

That team includes daughter Tori Watchous, who pointed out that once they learned about the contest, the family’s competitive nature took over.

“Our family, we’re very competitive. If you’re gonna do something, you go for the top spot,” Tori said. “I’m really proud of my mom. She made it all happen. This business is her dream. I’m really proud to see her get some payoff from it.”

But Watchous and Co. weren’t alone. The Best Western-Themed Booth was awarded to Barn Again. Renae Rosa, of Agua Dulce, California, and Helen Peters of Newhall, California, run the business together, and they put together a quaint and very popular Western arts-and-crafts space on the Las Vegas Convention Center floor.

Rosa was an exhibitor at Cowboy Christmas for three years earlier in the 2000s, but this was her first time back in 12 years.

“Because it’s the best one. That’s the bottom line,” Rosa said. “This show is the greatest thing that happens all year. For us, this is like going to the Olympics.”

And in this instance, there was even a gold medal to be won. Unlike Watchous, Rosa was aware the contest was taking place. So she and Peters did the best they could to dress up their limited space on the second floor of the expo, and their customers responded with plenty of votes.

“We talked about it nonstop from before we even got here,” Rosa said. “We just said, ‘We’ve gotta do this.’”

When a crowd of people headed toward their booth — led by the inimitable Blue Man Group — Thursday afternoon, Rosa knew good news was brewing.

“They had the ribbon out, and I thought I might’ve done something good,” Rosa said. “When you want something really bad, and then you get it, it’s like 10 times better. It’s better than a surprise, because we’ve worked so hard.”

Added Peters: “I saw people gathering around, and I was like, ‘What’s going on?’ I was surprised, amazed, excited.”

The timing was especially good for Rosa, who very recently lost her beloved dog. It has been emotional for her, and Thursday’s prize was a real pick-me-up for someone who makes a living picking up the emotions of others. Many of the crafts that Rosa — the painter — and Peters — the sewer — create have a humorous saying on them or take a funny tack. And dog themes are a Rosa favorite, as well.

“Anytime you can stand around and laugh at things and relate to things, it’s great,” said Jo Ellis, a Cowboy Christmas shopper from Sacramento, California. “We need more laughter, and this booth is just priceless.”

Pat Christenson, president of Las Vegas Events, said adding the contest was just a natural progression for the ever-expanding and improving cowboy/cowgirl and Western lifestyle expo.

“Each year, the exhibitors continue to make improvements in their overall look and presentation at The Cowboy Channel Cowboy Christmas,” Christenson said. “Our tagline is, ‘It’s all here,’ and (these awards are) a tribute to all of the work that each exhibitor has put in to continually enhance all that is offered at the show.”