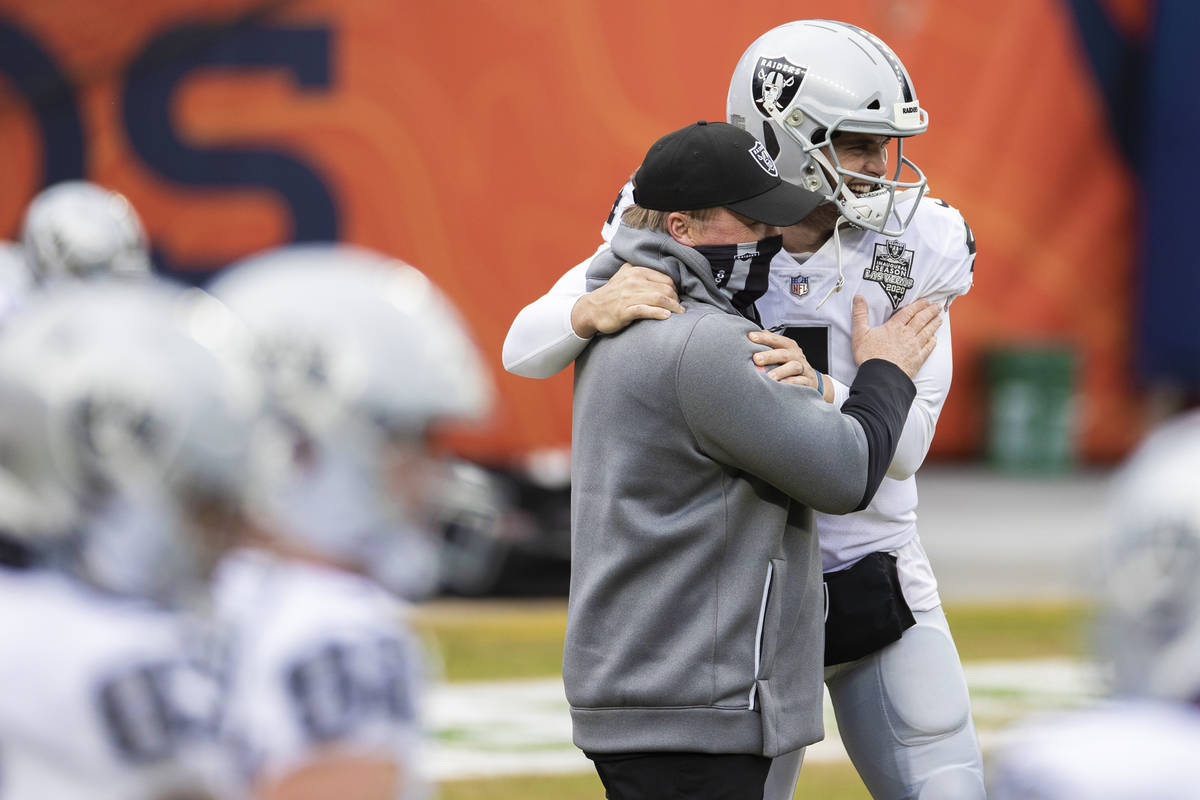 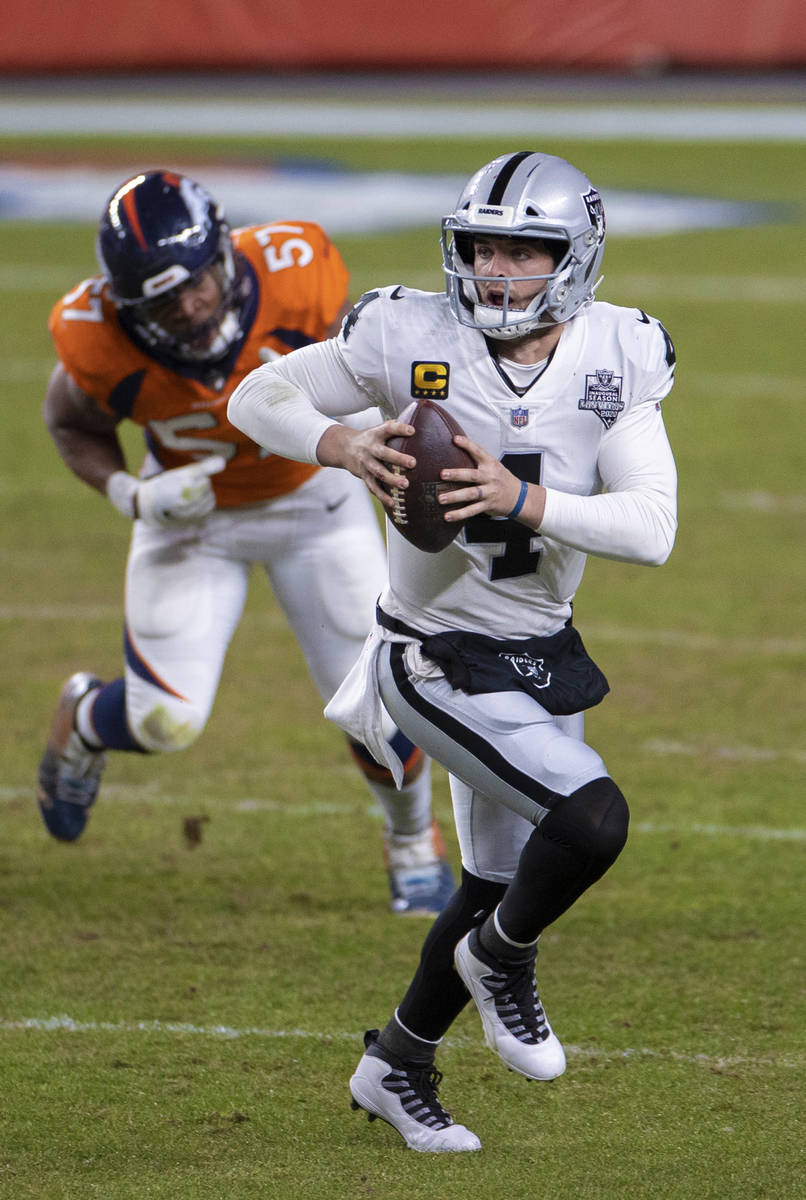 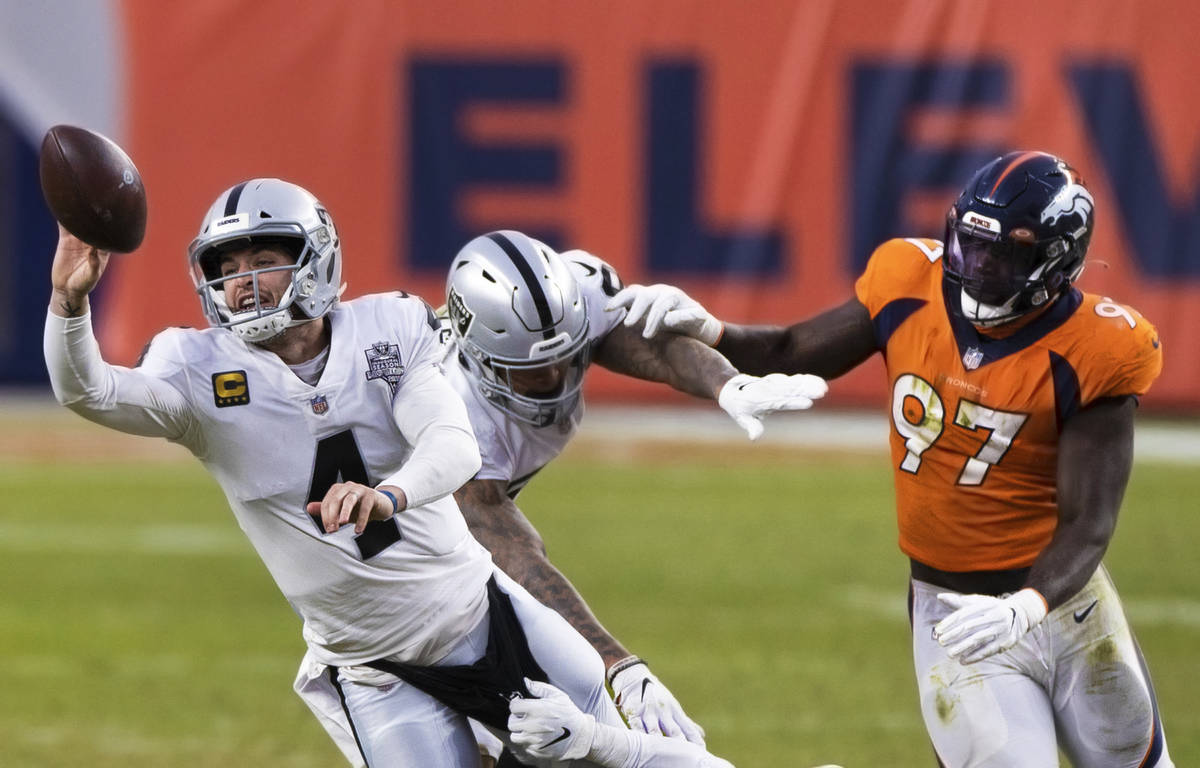 Raiders quarterback Derek Carr (4) just gets a pass away with pressure from Denver Broncos outside linebacker Jeremiah Attaochu (97) in the second quarter during an NFL football game on Sunday, Jan. 3, 2021, at Empower Field at Mile High Stadium, in Denver, CO. (Benjamin Hager/Las Vegas Review-Journal) @benjaminhphoto 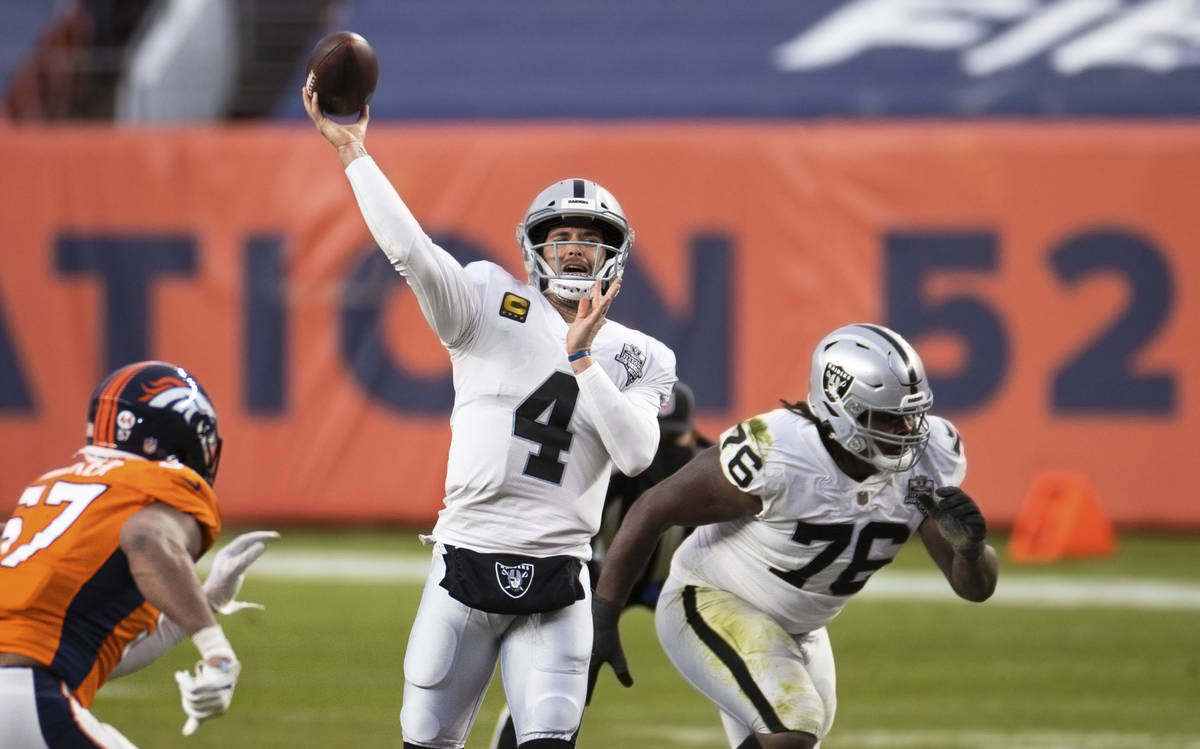 The Super Bowl is Sunday, and the Raiders aren’t any different from 30 other teams not participating when it comes to their quarterback room.

They wonder, does it include a player who can take you to the ultimate of games?

Can you win it all with the guy under center?

Opinions obviously vary depending on the situation, but the Raiders certainly should be asking such questions. Derek Carr will enter his eighth NFL season in 2021 and has yet to win a playoff game. Teams are reportedly interested in pursuing him. Deshaun Watson might be available via trade from the Houston Texans.

Yes. A tangled web of storylines.

Problem: As enticing as such plots might be — and none is more so than where Watson might play next season — they don’t address a central hurdle that faces the Raiders.

That no matter where this quarterback tale ends, Jon Gruden’s team isn’t going anywhere until it fixes what has been an awful defense.

Carr is coming off the best season of his career, and the Raiders still finished 8-8 and out of the playoffs.

It ties together, in a sense, that any proposed deal to land Watson would cost the Raiders dearly in draft capital. Picks they could use on defensive help. Not that they have had much success finding such reinforcements in the draft lately. More disappointments than not.

You can separate Carr and Watson when debating in which direction the Raiders should be looking at quarterback.

Here’s why: Unless you run the Kansas City Chiefs and employ Patrick Mahomes, you should be placing a call to Houston and inquiring about Watson. It would be irresponsible not to. He’s that valuable. The copycat league that is the NFL has everyone looking for the next Mahomes. Watson is as close as you get right now.

The price for Watson, if Houston actually trades him, would be outrageously high. But you can’t not call. You can’t claim, as Raiders general manager Mike Mayock has, that it’s important to do your due diligence at every position while always looking for upgrades and not gauge the temperature in what would be a Watson sweepstakes.

Watson is the no-brainer in this tangled web.

What to do with Carr is actually a more intriguing question.

I understand why teams that might think they’re close to a deep playoff run but are lacking at quarterback — Indianapolis, Chicago — would have an interest.

Carr threw for 4,103 yards and completed 67.3 percent of his passes this season. The Raiders weren’t sitting at home again during the playoffs because of Carr. He was plenty good enough.

But if the phone rings, you answer it. You never know what a team might be willing to pay for such a quarterback on a favorable contract.

What nobody really knows outside the organization: Do the Raiders believe Carr can win a Super Bowl? Is there even a hint they think he has reached his ceiling? How much better can he really be in Year Four under Gruden than he was in Year Three?

What it means is that the Raiders are drawing closer than ever to determining Carr’s fate in Las Vegas. Watson is the easy choice if a deal could be made. (Good luck with that.)

But if things don’t go that way — and odds heavily favor them not — you have in Carr a veteran who will rightly be seeking an extension. That’s when answers to those questions become paramount.

We’re likely about to see, one way or the other, what the Raiders really think about Derek Carr.

Whatever they decide, they better have a plan. You always need a plan.

One that won’t mean anything, by the way, if they don’t fix that defense.