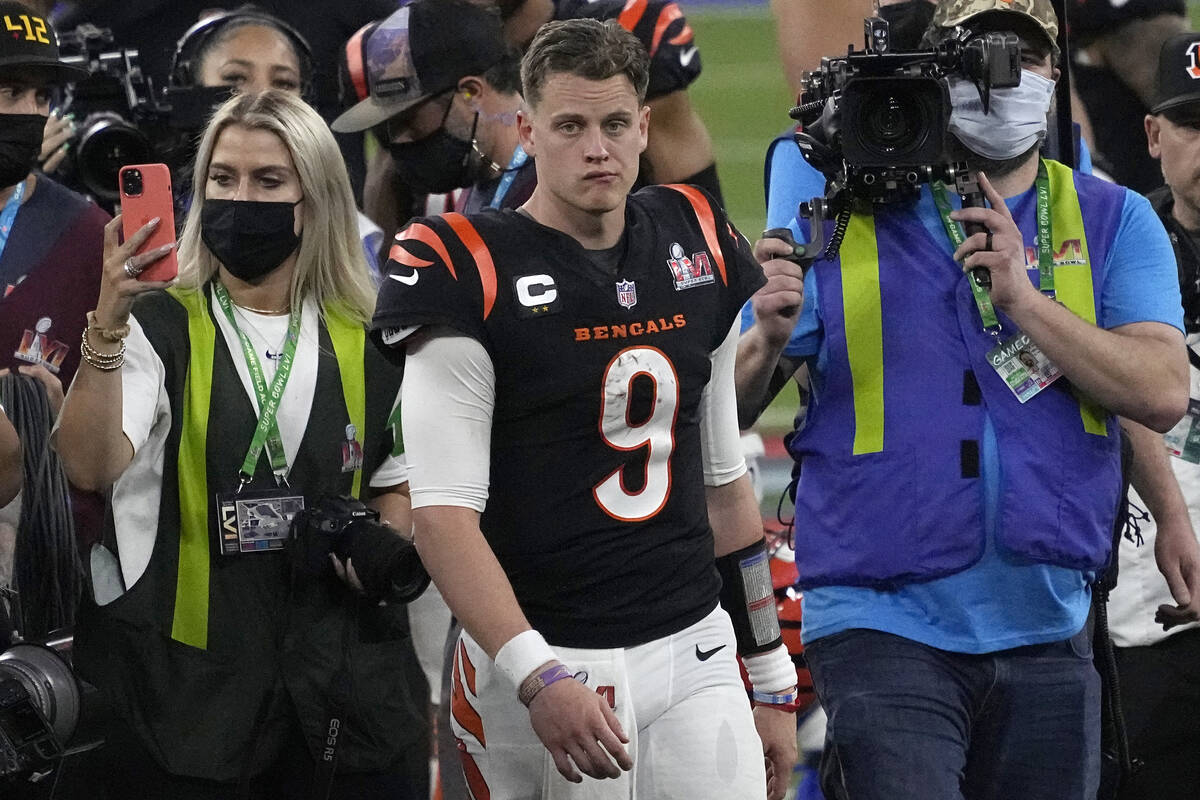 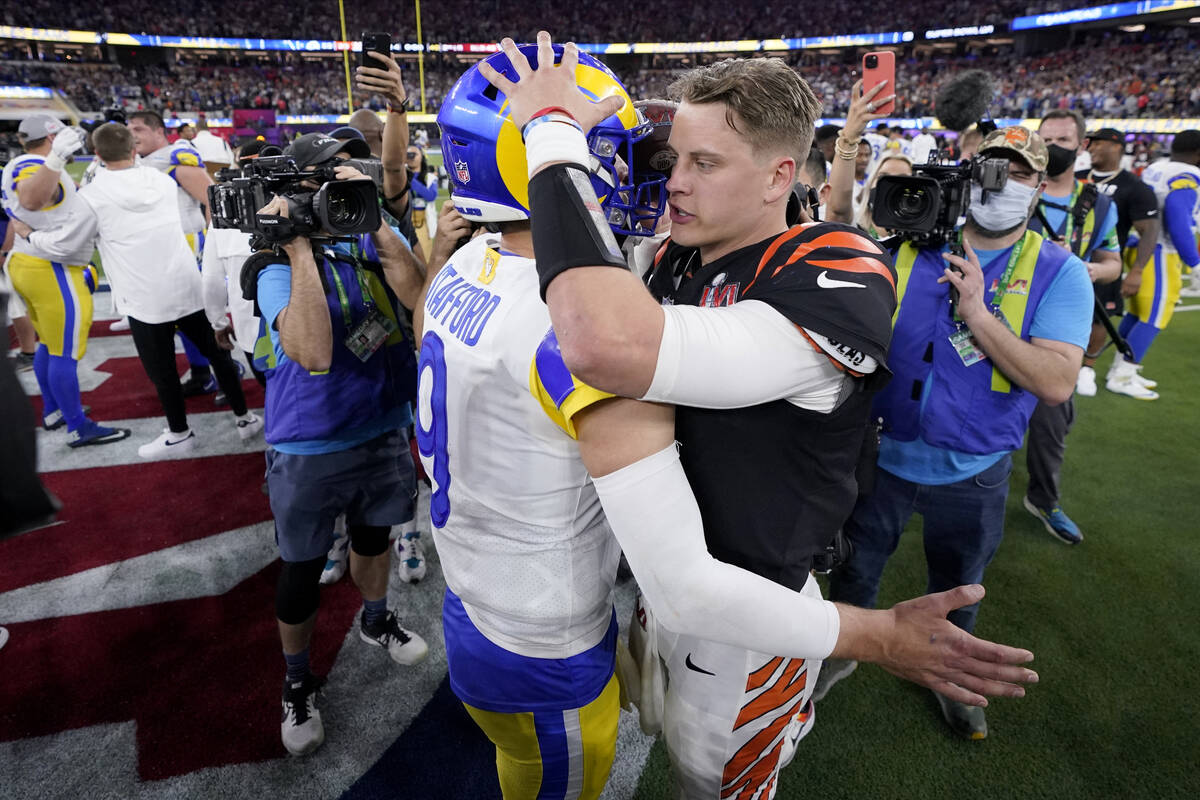 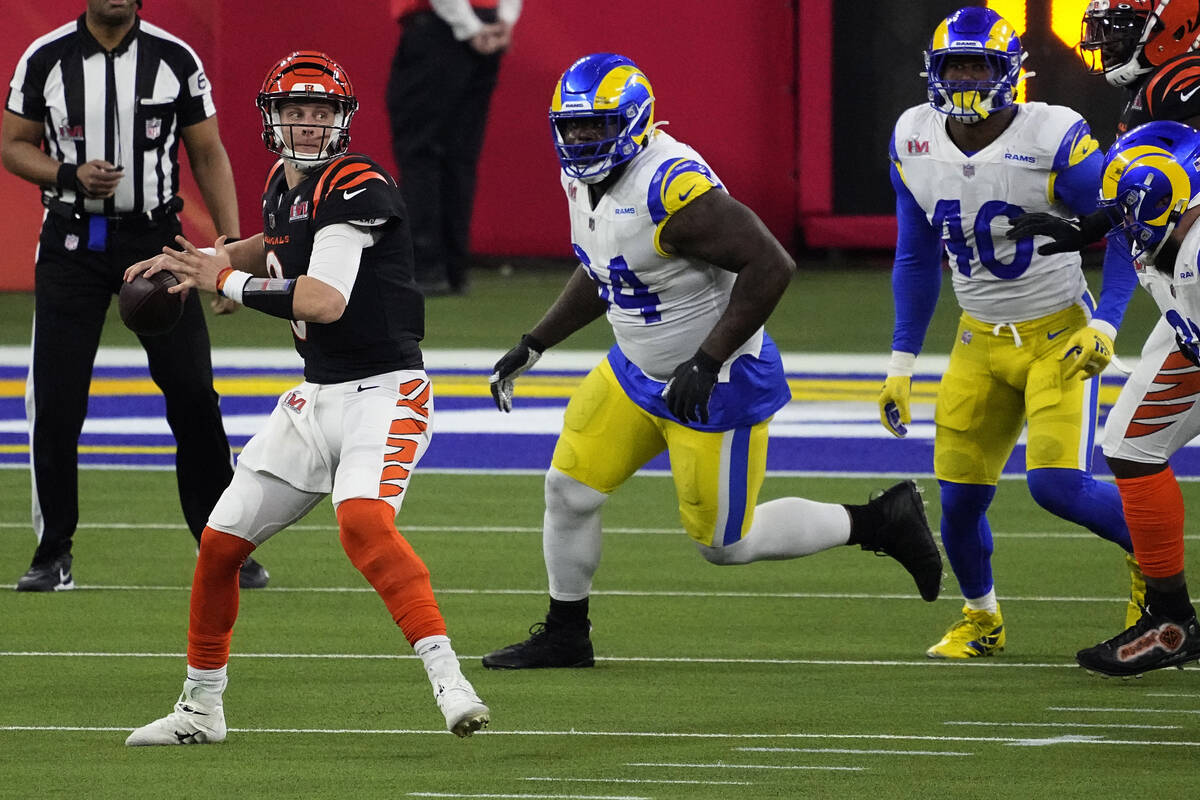 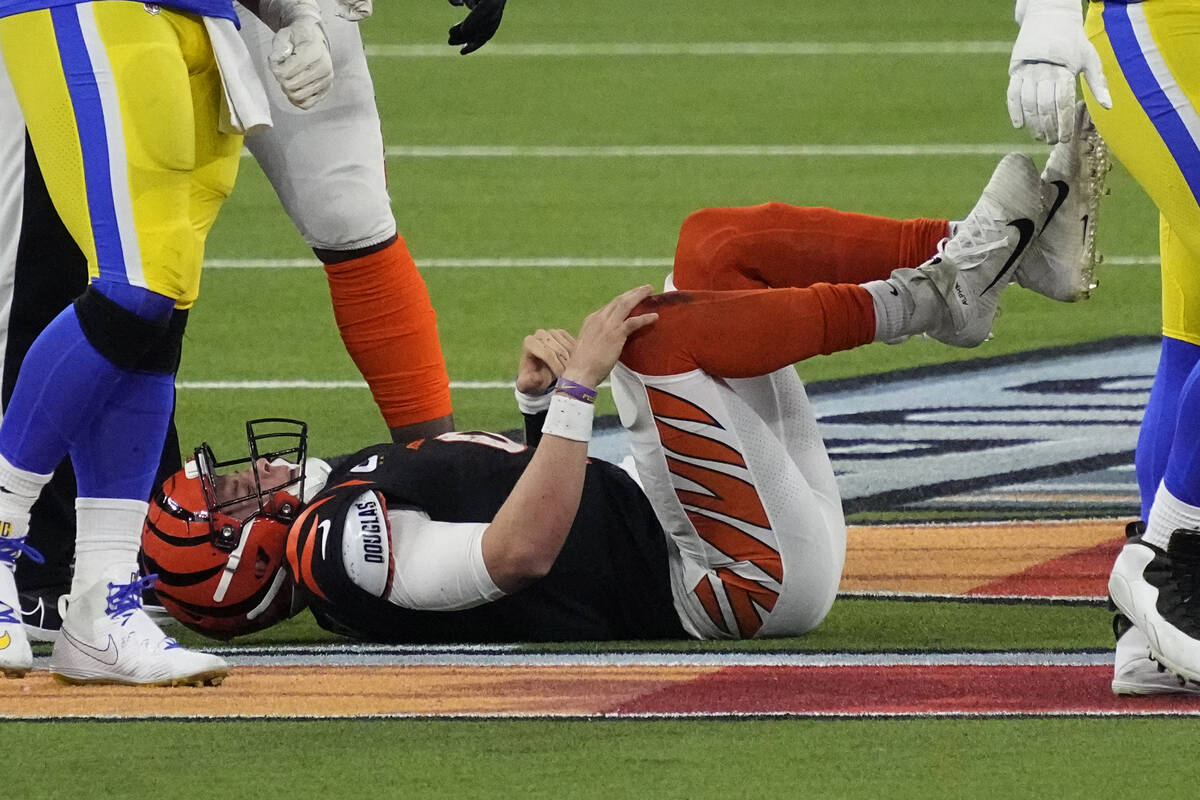 Cincinnati Bengals quarterback Joe Burrow (9) lies on the turf after being sacked during the second half of the NFL Super Bowl 56 football game against the Los Angeles Rams, Sunday, Feb. 13, 2022, in Inglewood, Calif. Burrow was injured on the play. (AP Photo/Julio Cortez) 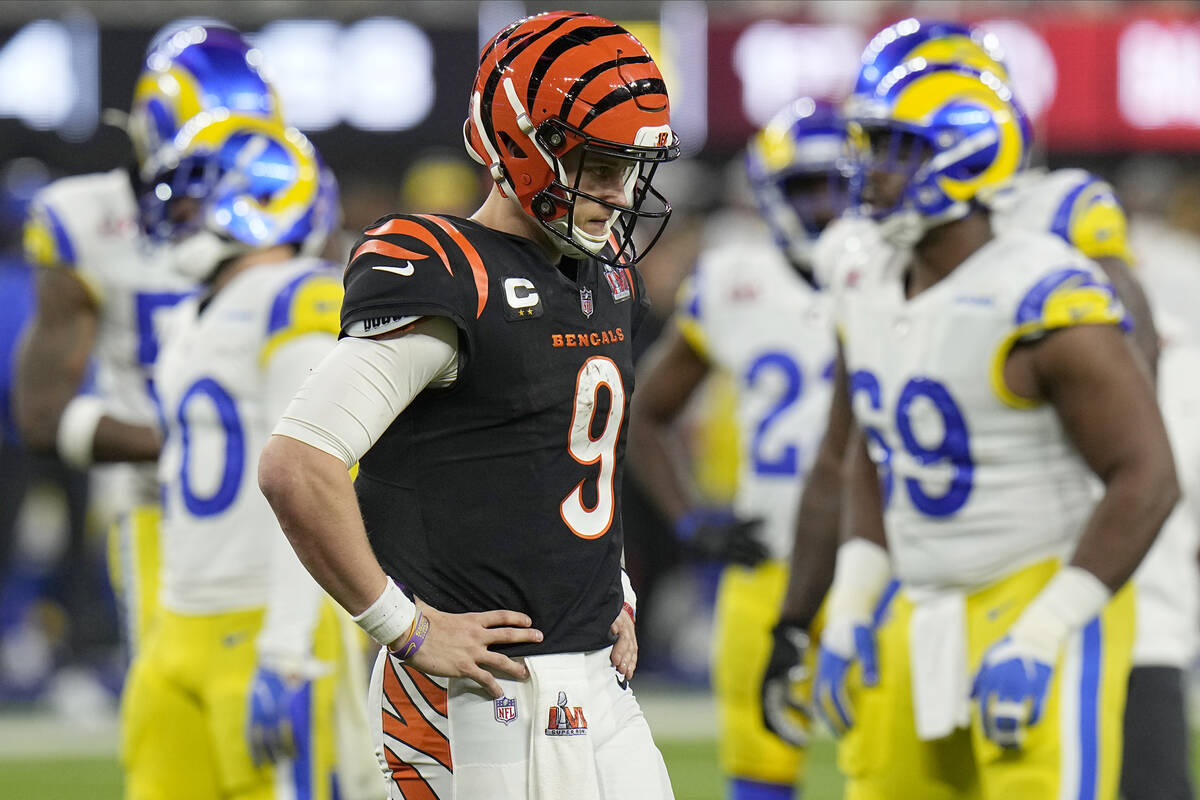 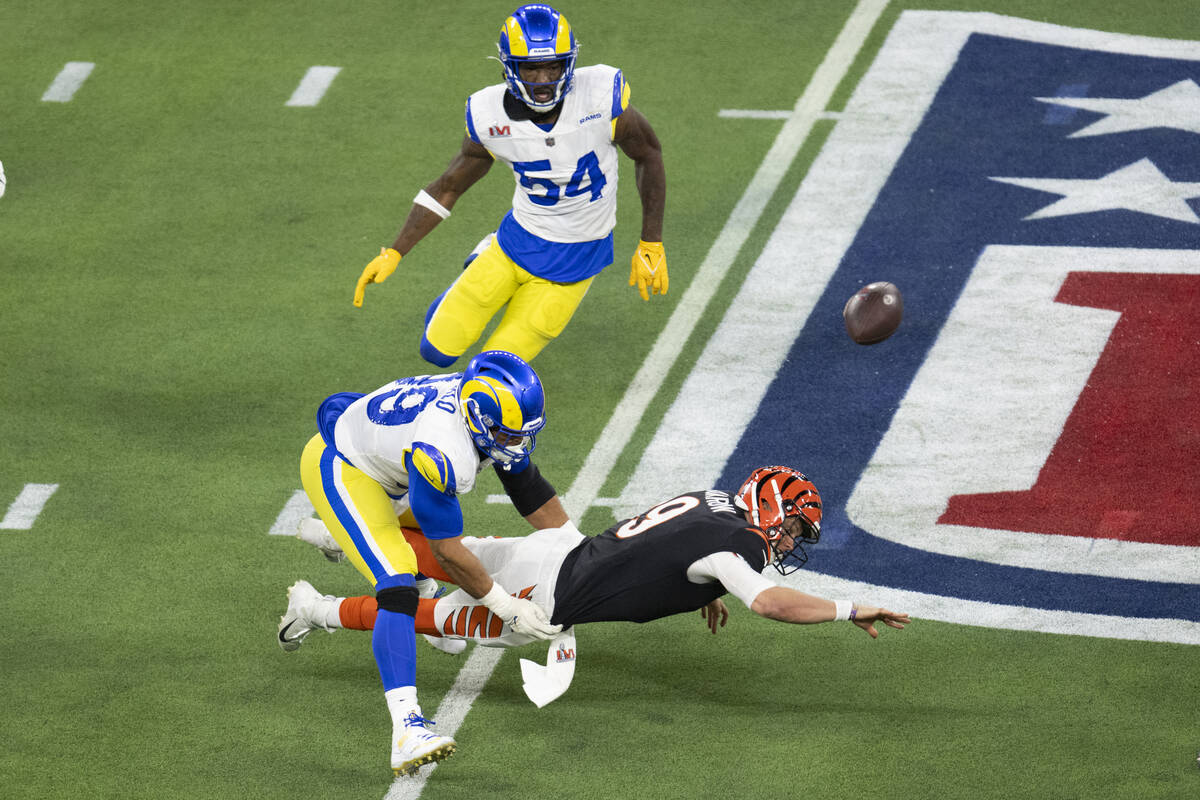 INGLEWOOD, Calif. — Who Dey, it wasn’t meant to be.

The Cincinnati Bengals might have fallen short of a Super Bowl LVI victory Sunday night, but not because they weren’t prepared or good enough to win it.

The Rams are your champions via a 23-20 victory before 70,048 at SoFi Stadium. It took them nearly every tick of the clock to become the second team from Los Angeles to win it all.

Yeah. The Raiders have some company now. I can’t believe owner Mark Davis is all that enthused about it.

This was never about Cinderella with the Bengals. Glass slippers, pumpkins and carriages were never a legitimate part of their story. Instead, their run through the AFC bracket was the work of a team and a quarterback coming of age.

“We built a foundation for years to come,” said cornerback Chidobe Awuzie. “I know people might point some fingers at things we didn’t do well, but we can leave with our heads held high. We fought until the end. We have a really bright future.”

That’s largely because of second-year quarterback Joe Burrow. This won’t be his final deep postseason run. Be sure of it.

He would finish 22-of-33 for 263 yards and a score. But the one area in which the Bengals had struggled with most this season did them in over the second half.

Cincinnati couldn’t block the Rams for much of it, meaning Burrow couldn’t sustain the drives that led to just a 13-10 deficit at intermission.

He would be sacked seven times in all. It was such pressure that allowed the Rams to rely on their offense just enough to rally from down 20-16 over the final quarter.

When it was over, when he had fallen under the profound size of Rams defensive tackle Aaron Donald a final time, his hopes and dreams engulfed by such a gigantic presence, Burrow remained on the ground.

He was helped to his feet by a teammate. Bruised. Beaten. Bewildered.

It’s the first time he lost a postseason game — including college — in eight tries. It also concluded arguably the best playoff tournament in NFL history and offered its own theatrics over a final six minutes.

If you’re going to lose, do so because an opponent’s best players stand supreme. Wide receiver Cooper Kupp — the Super Bowl’s Most Valuable Player with two touchdown receptions — and Donald did so for the Rams in clinching their crown.

“We were never afraid of adversity,” said Bengals coach Zac Taylor. “This team believed we could pull this out. We always seemed to find a way.

“But you need to credit the Rams. They won this game. They made the plays. They’re the world champions. I wish we were, but we’re not.”

An awful defense was slowly rebuilt and Burrow was taken first in the draft to add some level of respectability within the organization’s walls and on its turf.

He has done so much more in such a short time.

Burrow had some down time recently and decided to watch the movie “A Football Life.” It’s about an unlikely rise of draft reject and grocer Kurt Warner to NFL quarterback and Super Bowl hero.

In it, Warner (who was 1-2 in Super Bowl starts) explained that after his St. Louis Rams team lost to New England in Super Bowl XXXVI, he and teammates allowed the bitterness of defeat to sting for far too long.

They never spent time remembering the accomplishment of making it so far.

“We can’t do that now,” Burrow said. “We need to let it hurt and then celebrate this season. Sure, it stings. But we’re going to be back here multiple times over the next few years. I believe that. We just couldn’t finish it the way it was supposed to.”

Who Dey didn’t win it all, not because they weren’t prepared or good enough.

And not because it was some fairy tale minus the happy ending.