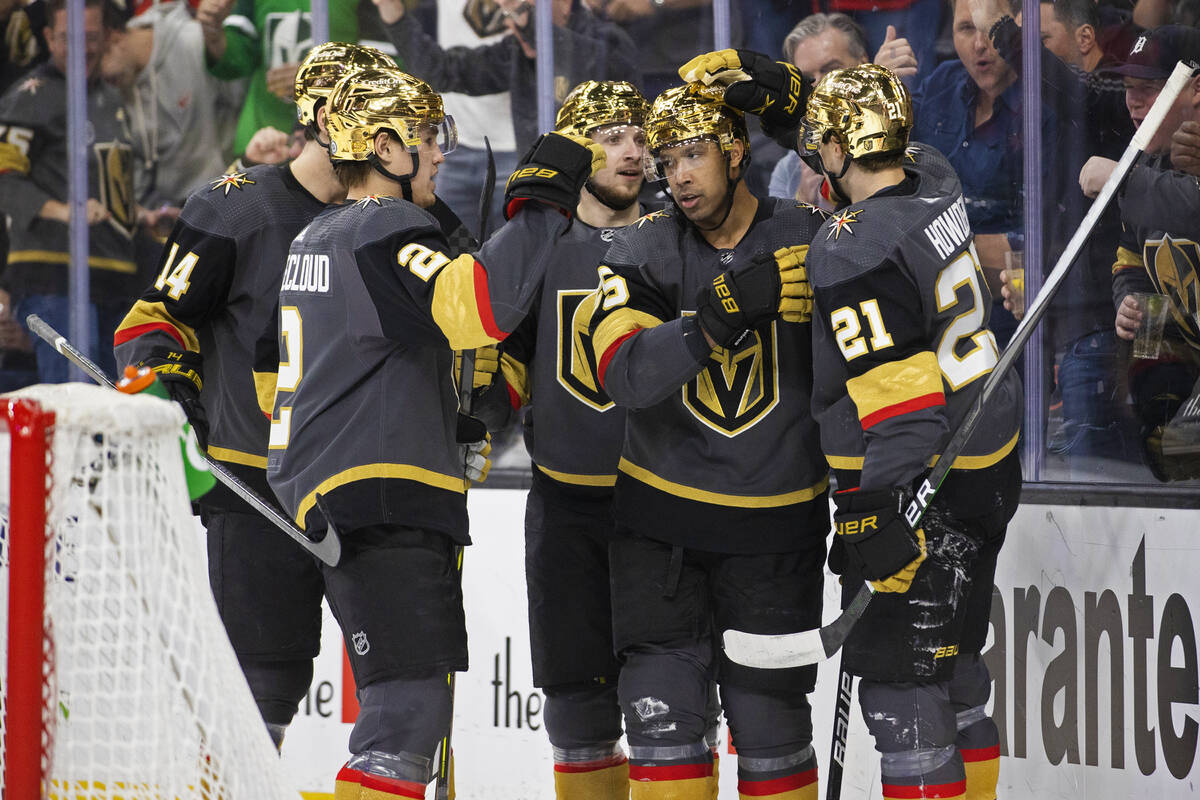 The sky isn’t falling. Not yet, anyway.

There are few better tonics to aid in halting a Golden Knights’ losing streak than to play San Jose.

But we know what happened against those guys.

The Knights were 3-1 winners against the Sharks before 17,819 on Tuesday night at T-Mobile Arena. Pete DeBoer’s team had lost five of its past six games and dropped to third place in the Pacific Division.

You half expected crowds of rowdy Knights fans with pitchforks and torches to gather and demand that heads roll. Such displeasure can be paused for now.

Or at least until Boston visits Thursday.

This part seemingly never changes: The Knights remain a team with key pieces missing because of injury.

Knights forward Reilly Smith believes it’s all outside noise, that there is no locker room chatter about the misfortune that has befallen his team.

There shouldn’t be any. The topic has been out-talked.

Who the Knights are changes by the minute depending on names being shuffled on and off injured reserve, but none of it overshadows a central theme of professional sports.

“You have to play with who’s in your lineup on a given night,” said Smith, who scored twice Tuesday. “Hopefully there is light at the end of the tunnel, but you can’t worry about that. The players we have dressing right now know we can beat any team in the league.

“You just kind of grind through, and then you look over your shoulder and have won five in a row and you forget all about when you were struggling.”

Funny. Given the number of injuries the Knights suffered early in the season — when the 215 Beltway became a thoroughfare for American Hockey League players to travel between Henderson and the NHL side — this might be the healthiest DeBoer’s roster has been since then.

And that’s with players such as captain Mark Stone and wingers Max Pacioretty and Mattias Janmark and defenseman Alec Martinez out.

“We have nothing to complain about,” DeBoer said. “We’ve got more access to NHL players than we had the first couple months and are finding ways to win games.

It’s hockey. You’re chasing points. You can go through times of not playing well and still win games with timely goals and hot goaltending. You can also play really well for stretches and not tally any points.

It has been such a storyline for the Knights lately — except the winning part. You fall to — yes, Arizona — and then offer a terrific effort (and yet another defeat) to the league’s best team in Colorado.

Which begs the question: Has there been enough inconsistency to consider change?

It was when center Jack Eichel became healthy enough to play last month that general manager Kelly McCrimmon balked at questions regarding the March 21 trade deadline and if he thought the Knights might be active again.

McCrimmon said he first wanted to see an entirely healthy Knights team before drawing any such conclusions. That’s not happening before the deadline. But the Knights have never stood pat this time of year.

Would they really at least not consider adding somewhere?

“I don’t think there is any kind of panic in the room,” goalie Laurent Brossoit said. “We’re pretty consistent that way.

“You can use the excuse of injuries all you want, but it’s not like we’re getting blown out of the building.”

They weren’t Tuesday. Actually won a game. Beat the Sharks for the 11th straight time.

A tonic the Knights desperately needed.

No need to duck just yet.

The sky holds steady for now.