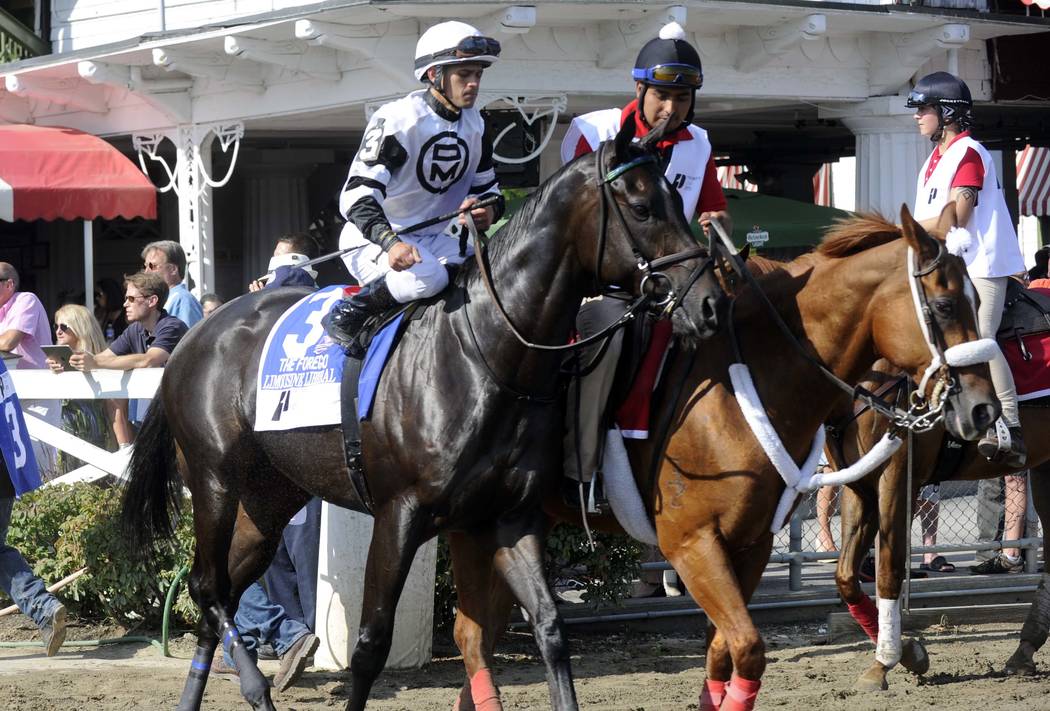 Step aside, Kim Jong Un. It’s my turn to be the “Rocket Man” as I break down the Sprint division with a month remaining until the Breeders’ Cup.

The picture for the $2 million Sprint, to be run Saturday, Nov. 3 — Day 2 of the two-day international racing extravaganza at Churchill Downs – is clearer than most at this point, with Imperial Hint having established himself as the solid favorite among the speed-burner brigade.

But as we saw last weekend, when Breeders’ Cup Classic heavyweight Diversify and Distaff leader Abel Tasman both finished off the board in their final tuneups for the big event, it’s too soon to be thinking about a Sprint single.

Nonetheless, Imperial Hint has put together an impressive 5-year-old season for little-known trainer Luis Carvajal and owner Raymond Mamone. The Florida-bred son of Imperialism has won four of five starts, including back-to-back victories in Grade 1 “Win and You’re In” races — last weekend’s Vosburgh Stakes at Belmont Park and the Alfred G. Vanderbilt Handicap at Saratoga.

If you’re looking for a reason to ding the runner-up in last year’s Sprint, you can hang your hat on the fact that he’s 0-for-2 at Churchill Downs, most recently checking in sixth in the Churchill Downs Sprint Stakes in May. But both those defeats came in graded stakes races where he was asked to extend himself beyond his optimal 6-furlong distance, so be sure to factor that into your thinking if you intend to try to beat him.

We’ll find out more this week about who his main competitors figure to be after the $250,000 Phoenix Stakes (Grade 2) at Keeneland on Friday and the Santa Anita Sprint Championship (Grade 1) on Saturday.

Both races came up short numerically but deep on talent.

In the Phoenix, Promises Fulfilled, Whitmore and Limousine Liberal will square off against three lesser foes, while Ransom the Moon and Roy H are expected to stage a showdown at Santa Anita.

There also are still a few wild cards out there. The scary fast X Y Jet, winner of three of four races this year, will train up to the Sprint after being sidelined by a swollen hock. Horses like Firenze Fire and Mind Your Biscuits appear more likely to run in the Dirt Mile or even the Classic, but they could still call an audible and cut back to the Sprint.

We’ll know a lot more in just a few days.

The #RJhorseracing handicappers extended their stay in New York so they could tackle a couple challenging 2-year-old races at Belmont Park: The sixth race on Saturday’s card, a maiden special weight for 2-year-old fillies run at 6 furlongs on the turf, and the $500,000 Champagne Stakes (Grade 1) for 2-year-olds at a mile on the main track.

In the tricky maiden race with an overflow cast of lightly raced fillies and first-time starters, the handicapping crew likes 9-2 second choice on the morning line, Regal Glory, over Shannon’s Girl (7-2) and the Irish import Tiple (8-1).

I like Paradise Retained (5-1) if she draws in off the also-eligible list, over Shannon’s Girl, Regal Glory and Tiple.

In the Champagne, a major prep for the Breeders’ Cup Juvenile, the crowd ‘cappers are siding with the Chad Brown-trained Complexity, the 5-2 morning line favorite who romped in his debut, over Call Paul (4-1) and Aurelius Maximus (6-1).

I’ll take a shot with Trophy Chaser (10-1), who comes off two impressive efforts in Florida and might just be able to surprise the big boys in New York. I’ll use Aurelius Maximus and Complexity underneath.

You can get in on the fun and possibly win a not-so-valuable but one-of-a-kind prize next week by emailing me or following me on Twitter and letting me know you’d like to get involved.