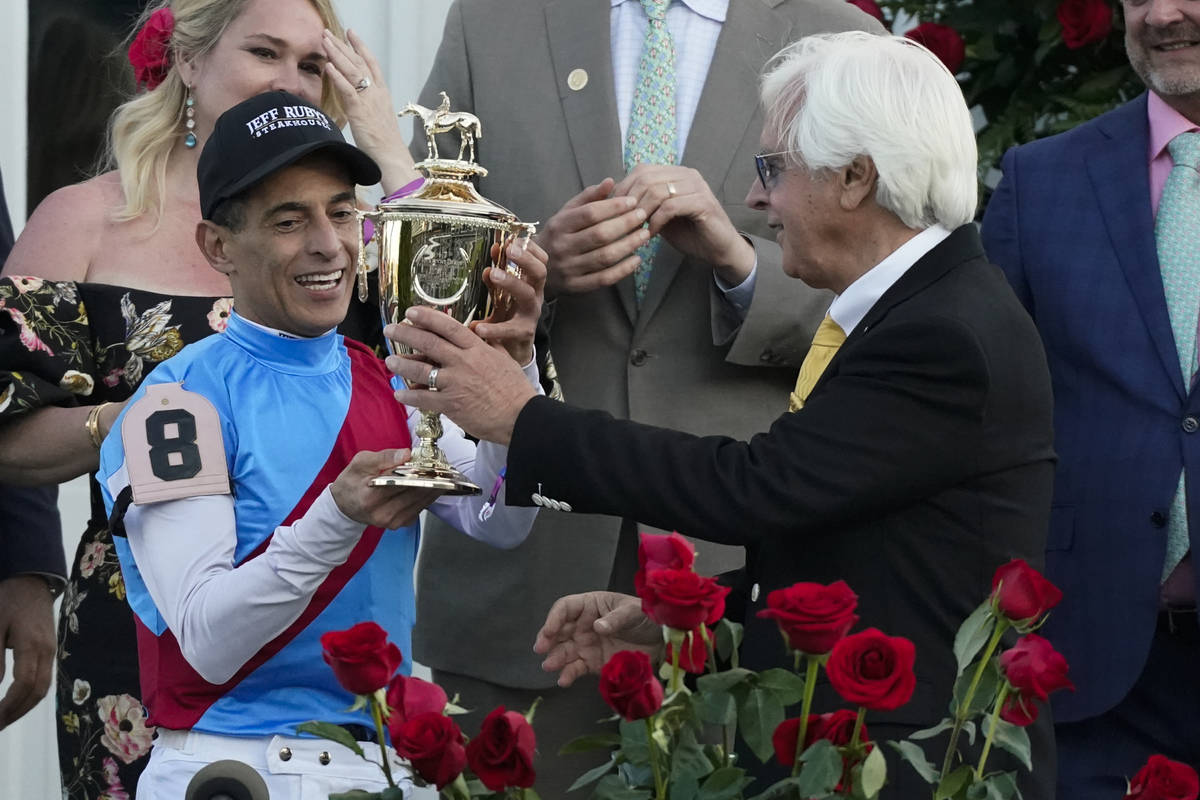 Jockey John Velazquez, left, watches as trainer Bob Baffert holds up the winner's trophy after they victory with Medina Spirit in the 147th running of the Kentucky Derby at Churchill Downs, Saturday, May 1, 2021, in Louisville, Ky. (AP Photo/Jeff Roberson) 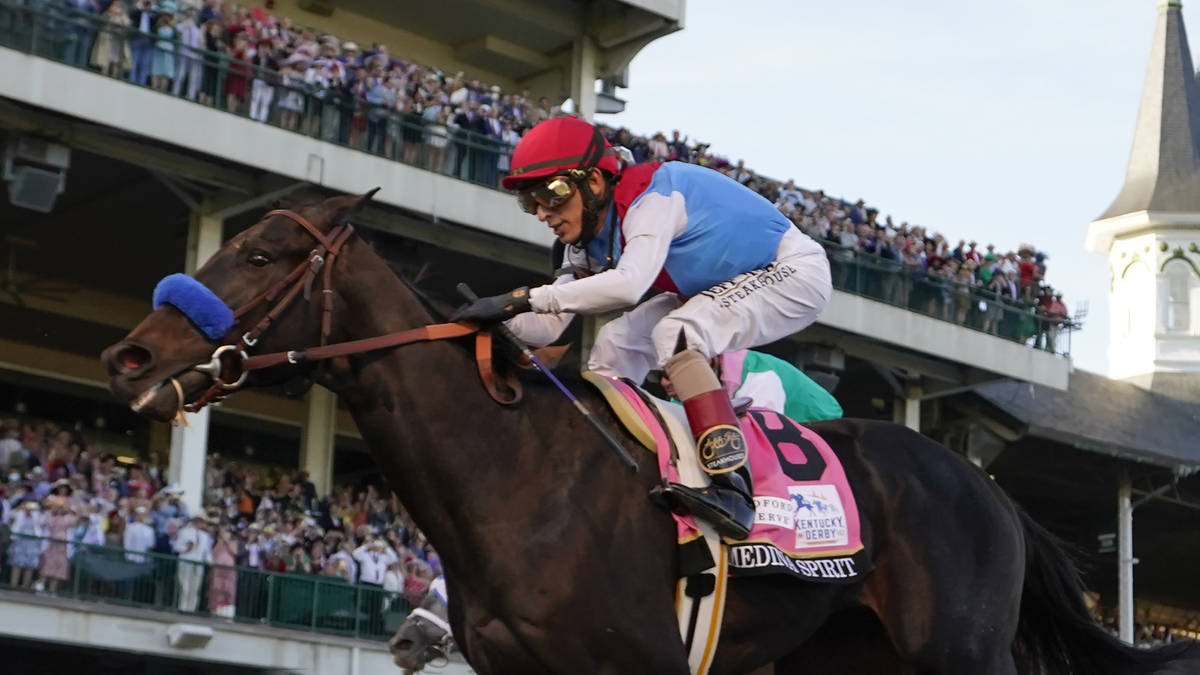 What do you do when your pick in the world’s biggest horse race tramples your hopes and dreams in the first stride out of the gate? You get back on your feet, shake the dirt out of your pants and jacket and climb right back into the saddle, that’s what.

That means I’m looking ahead to the $1 million Preakness Stakes, just over a week away, not dwelling on the rough start of Rock Your World in the Kentucky Derby. Well, mostly so, anyway.

Right now it appears that nine horses maximum will line up to contest the second leg of the Triple Crown at Pimlico Race Course in Baltimore on May 15, led by Derby winner Medina Spirit.

The Bob Baffert-trained son of the previously unheralded stallion Protonico proved a stubborn winner in Louisville, leading the field gate to wire but still digging in through the stretch run to hold off the charging trio of Mandaloun, Hot Rod Charlie and favored Elusive Quality. Running time was a strong 2:01.02 for the 1¼ miles.

As usual, the Derby veterans will face some fresh faces in the Grade 1 race at 1 3/16ths mile, including Medina Spirit’s stablemate, Concert Tour, winner of the San Vicente Stakes and Rebel Stakes (both Grade 2s).

Others who sat out the Derby but might run in Baltimore are Crowded Trade, a Chad Brown-trained colt who finished second in the Gotham Stakes (Grade 3) and third in the Wood Memorial (Grade 2) in his last two starts; France Go de Ina, a Japan-based runner who finished sixth in the U.A.E. Derby last out; Ram, a recent allowance winner at Churchill Downs for Hall of Famer D. Wayne Lukas; Rombauer, winner of the El Camino Real Derby at Golden Gate Fields before finishing third in the Blue Grass Stakes (Grade 2); and Unbridled Honor, runner-up in the Lexington Stakes (Grade 3) at Keeneland in his most recent start for trainer Todd Pletcher.

Concert Tour appears to be the biggest threat to Medina Spirit. Baffert, now the winningest trainer in Kentucky Derby history, held the two-time stakes winner out of the Run for the Roses after he checked in a disappointing third as the favorite in the Arkansas Derby (Grade 1), but has indicated he will run in the Preakness if he continues to work well this week.

Baffert might write some additional human history in the Preakness, too. After breaking his tie with legendary trainer Ben Jones in Kentucky by winning his seventh Derby, he will seek to become the winningest trainer in Preakness history by eclipsing Robert Wyndham Walden, who saddled seven winners from 1875 to 1888.

Three inducted into Hall of Fame

The National Museum of Racing welcomed three new members into its Hall of Fame this week: Trainer Todd Pletcher, a 13-time Eclipse Award winner; American Pharoah, who ended a 37-year drought by capturing the Triple Crown in 2015 for — who else? — Baffert; and 13-time champion steeplechase trainer Jack Fisher.

Congratulations to all for the well-deserved honor.