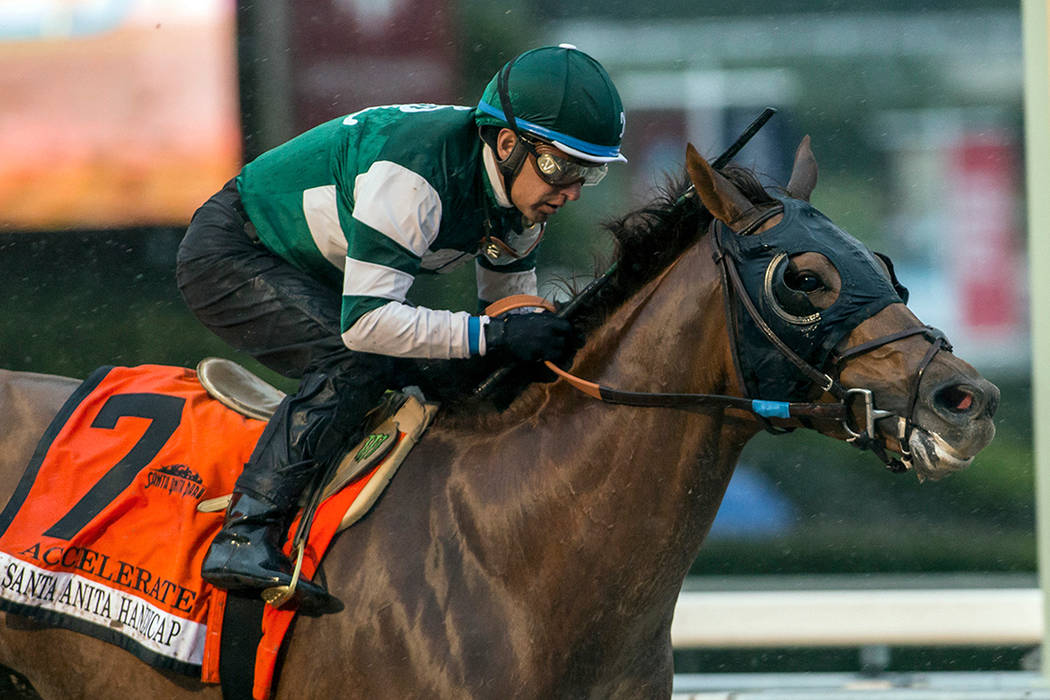 Accelerate, with Victor Espinoza aboard, wins the Santa Anita Handicap horse race at Santa Anita Park in Arcadia, Calif., on March 10, 2018. Accelerate leads the 14-horse field for the Breeders' Cup Classic, which will offer the 5-year-old a rematch against West Coast in a marquee race that's missing unbeaten Triple Crown winner Justify. (Benoit Photo via AP)

The Breeders’ Cup runneth over.

That means 12 of the 14 races were “oversubscribed,” meaning they had more entries than the maximum of 14 (except for 12 in the Juvenile Turf Sprint, because of the position of the starting gate near the far turn).

The two races that weren’t overdrawn were the Juvenile Fillies, which drew 11 pre-entries, and the Distaff, which drew 12.

Oversubscription is a good problem if you’re Netflix or the Review-Journal, but for handicappers trying to get an early start on the races, it’s a logistical nightmare. Many horses were pre-entered for more than one race, which means they could get bounced from one overflowing field into another, thereby bumping a horse from that race. That horse, in turn, might be cross entered in another race, setting the bumper cars in motion again until someone, somewhere is left on the outside looking in.

Let’s use the $6 million Classic as an example.

The race drew 19 pre-entries, or five more than can run. Three horses — probable favorite Accelerate, Discrete Lover and Pavel — are guaranteed a spot in the starting gate because they captured one of the “win and you’re in” Breeders’ Cup challenge races.

Four others — Axelrod, Lone Sailor, McKenzie and Mind Your Biscuits — get a spot as a result of a points system based on results of various prep races.

That leaves 12 other horses vying for the remaining seven spots. A panel of racing secretaries and other racing experts decides who among that desperate dozen gets to run and who doesn’t.

At this point, they have granted entry to Catholic Boy, City of Light, Mendelssohn, Roaring Lion, Thunder Snow, West Coast and Yoshida. That leaves out Bravazo, Gunnevera, Seeking the Soul, Collected and Toast of New York.

But that’s not the end of it. City of Light and Bravazo also were entered in the $1 million Dirt Mile, and their connections listed that race as their first choice. Since both have enough points to get into the Dirt Mile, it appears they will run there. Since Bravazo wasn’t in the Classic, that would make room for one horse on the also-eligible list for the Classic — Gunnevera.

Factor in scratches, then rinse and repeat a dozen times and you get some idea of how many dominoes have yet to fall before entries and post positions are drawn Monday. So rather than spending a lot of time doing detailed pace analysis and other matchups, this is a great time to watch as much video as you can and to develop general race “shapes” that will give you a jump when we get to the dirty work next week.

The intrepid #RJhorseracing handicappers are looking to build their bankrolls ahead of the Breeders’ Cup with two challenging turf races Saturday at Santa Anita — the eighth race, a one-mile claimer for nonwinners of three races, and the $100,000 Miss Autumn Stakes for 3-year-old fillies, also run at a mile on the lawn.

In the former, the crowd ’cappers are taking a stand with Impression, the 4-1 second choice on the morning line, over Cats Blame (4-1) and Buckstopper Kit (5-1).

I agree that Impression is a threat on the front end, but I’ll take a shot in what looks like a wide-open race with Incredible Luck (6-1), who also has some early foot, over Acker (7-2) and Impression.

In the Miss Autumn, the crew likes another second choice, Ms Bad Behavior (4-1), to knock off 9-5 favorite Toinette. Streak of Luck (10-1) will be a distant third, as they see it.

This week’s featured comment comes from Mark “the Godfather” Wayman, who is not among those who believe Ms BB can upend the favorite: “Always runs; never wins,” he said succinctly.

Toinette is a deserving favorite, but the steadily improving Streak of Luck, who retains Mike Smith in the saddle, is my pick. I have Toinette in second and Ms. Bad Behavior third.