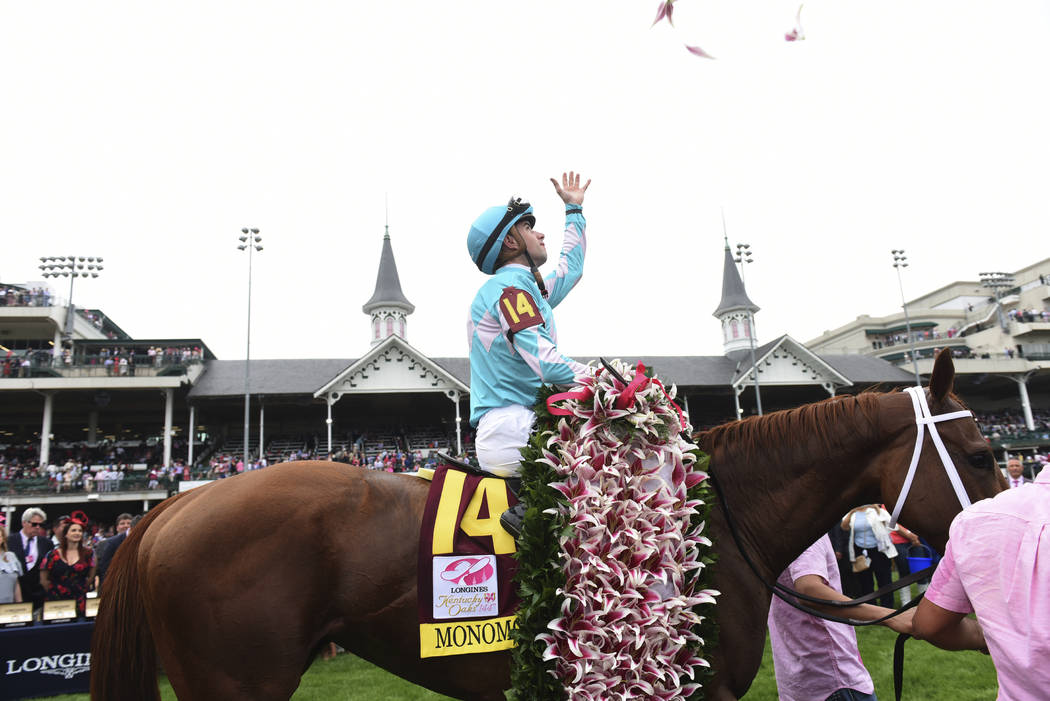 Jockey Florent Geroux celebrates after riding Monomoy Girl to win the 144th running of the Longines Kentucky Oaks, Friday, May 4, 2018 at Churchill Downs in Louisville, Ky.  (Photo by Diane Bondareff/Invision for Longines/AP Images)

As I try to wrap my head about the upcoming Breeders’ Cup extravaganza — now just six weeks away — I often find my thoughts drifting to the islands.

Not the surf and trade winds kind, but the two stars of the Distaff division with names connected to land masses surrounded by water: Monomoy Girl, who I presume is named after Monomoy Island off Cape Cod, and Abel Tasman, named after the Dutch explorer who, as you no doubt remember, discovered the Australian island state of Tasmania in 1642.

Geography and history aside, the expected matchup between the sensational 3-year-old Monomoy Girl and her accomplished 4-year-old rival in the $2 million Longines Distaff is shaping up as one of the most anticipated among the 14 Breeders’ Cup races scheduled for Nov. 2-3 at Churchill Downs.

The Brad Cox-trained Monomoy Girl is a neck shy of being 9-for-9 in her career and is without a blemish this year with five straight graded stakes victories, four of them Grade 1 races. The daughter of Drumette is the 3-5 morning-line favorite in Saturday’s $1 million Grade 1 Cotillion Stakes at Parx race course, where she will again try to fend off fellow sophomore graded stakes winners Chocolate Martini, Dixie Serenade, Midnight Bisou, Separationofpowers and Wonder Gadot, among others in the 1 1/16th-mile race.

Abel Tasman, meanwhile, established her track cred last year, when she was took home the 3-Year-Old filly Eclipse Award after running first or second in all seven starts for trainer Bob Baffert. The daughter of Quality Road picked up where she left off this year and has won two straight Grade 1s, including a dogfight over fellow 4-year-old Elate in the Personal Ensign Stakes at Saratoga on Aug. 25.

With the recent retirement of Unique Bella, Elate may have the best chance of keeping the Distaff from turning into a two-horse race, as the multiple graded-stakes winner was beaten a neck by Abel Tasman in the Personal Ensign.

But the Daily Racing Form reported Wednesday that she will miss the Beldame Stakes at Belmont Park on Oct. 6, which was to have been her final Breeders’ Cup prep, because of inflammation in her right foreleg. Trainer Bill Mott indicated she could train up to either the Classic or Distaff, but that’s not how you want to see a horse coming up to such a tough race.

Others who remain in the Distaff hunt include Blue Prize, winner of two straight stakes races at Churchill Downs; Eskimo Kisses, winner of the Alabama Stakes at Saratoga last month; and the German-bred La Force, runner up to Unique Bella in the Clement L. Hirsch Stakes at Del Mar last out.

The #RJhorseracing handicappers also are focused on Parx this week, though not on the Cotillion. We’re taking on the $1 million Grade 1 Pennsylvania Derby, featuring some familiar faces from the Triple Crown trail, as well as the $100,000 Alphabet Soup Stakes on the turf on the undercard.

In the Alphabet Soup, a 1 1/16th mile stakes on the turf for Pennsylvania-bred 3-year-olds and up, the crowd ‘cappers are taking a stand with Fielder, 5-1 on the morning line, over 5-2 favorite Fast and Accurate and Someday Jones (15-1).

I’ll aim high as well and see if Threeohtwocassie (8-1) can pull off the upset after being interfered with in the stretch of his last race. I’ve got Fast and Accurate and Taxable Goods (10-1) underneath.

In the Pennsylvania Derby, to be run at 1⅛th mile on the main track, the crew narrowly sided with Hofburg (3-1) over McKinzie (5-2) and Axelrod (6-1).

I think McKinzie is the horse to beat, but I’m picking Bravazo (6-1), who dances every dance and is going to be a much better prize. I’ll go with McKinzie to place and Hofburg for the show.

Join the fun next week by emailing me or following me on Twitter and letting me know you’d like to get involved.