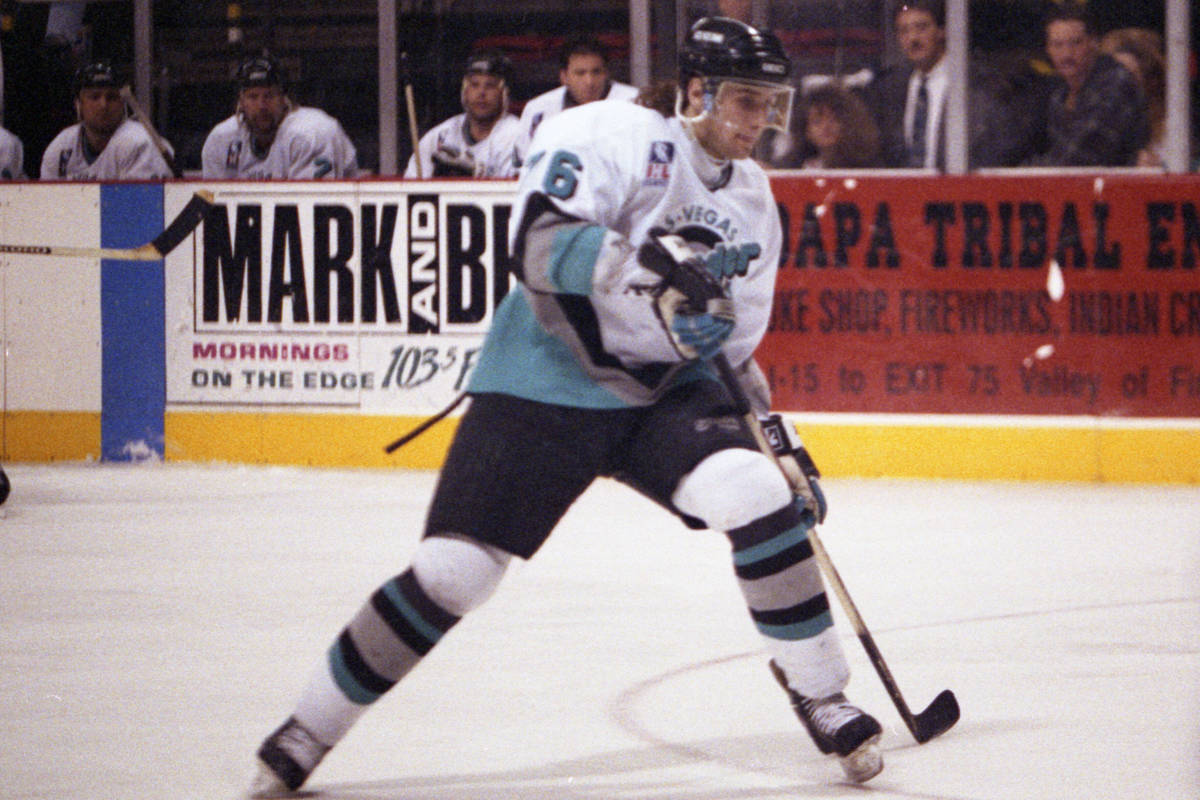 The mullet is gone. The name lives on.

Radek Bonk, who scored 42 goals as a 17-year-old for the International Hockey League’s Las Vegas Thunder and was so popular with the Ottawa Senators that a website named for his distinctive coiffure — Bonk’s Mullet — continues to this day, is making quite a run in ESPN.com’s Greatest NHL Names Bracket.

In a major upset, the sixth-seeded Bonk defeated top-seed Miroslav Satan in one of Wyshynski’s regional finals.

Wrote the hockey guru: “The final two are, for me, the essence of the National Hockey League. You have the poetic flourish of Guy Lafleur, a French Canadian name that wafts through the air, leaving the faint smell of maple and cigarettes. You have the blunt force of Radek Bonk, a name that metaphorically bludgeons you.

Sachin Chandan, which also would have been a good name for a hockey player but, who, in fact, is an ESPN researcher, also had Bonk going all the way to the finals before losing to Loob.

Wrote one Bonk supporter on Twitter: “Bonk was robbed! This was rigged from the start! Massive amounts of fraud!”

Wrote another: “Oh (expletive). (Just) wait until @Bonk’sMullet sees this.”

Bonk was robbed! This was rigged from the start! Massive massive amounts of fraud! (But seriously, how does Bonk not win this?)

Zarley Zalapski was robbed. It's hard enough to have your last name start with a Z, but his first name did as well. Imagine all the things growing up where they went in alphabetical order, poor guy. He deserved this.

— After Hawaii’s 28-14 victory over Houston in the New Mexico Bowl played in Frisco, Texas, the Mountain West tweeted the conference is now 5-0 in bowl games against the American Athletic Conference.

MWC media darling Boise State reportedly is considering a jump to the AAC. If you didn’t know better, you might have thought the home office in Colorado Springs was sending out a subtle reminder that the field turf on the other side of the football fence isn’t always bluer.

— To commemorate FC Barcelona’s Lionel Messi breaking Pele’s longstanding record with his 644th career club soccer goal, Budweiser sent a bottle of suds to each of Messi’s goaltender victims with the number of the goal he allowed to Messi emblazoned on front.

If the King of Beers had done the same for the former king of goal scorers, Alan Mayer would have been spared such good-natured ignominy. Mayer was the keeper for the short-lived Las Vegas Quicksilvers on April 9, 1977, and recorded a clean sheet against Pele and the New York Cosmos.

It was the first North American Soccer League game played at Sam Boyd Stadium. Despite the presence of the magnetic Pele, it drew a crowd of only 11,896.

Eusebio was in the lineup for Las Vegas. The Portuguese goal sniper also went scoreless. The game’s only goal was scored by Victor Arbelaez, a former soccer coach at Bishop Gorman who died in 2007 at age 54.

🍾 To celebrate Messi’s record: @Budweiser are sending out a personalized bottle to each goalkeeper Messi has scored past in his career, with some GK’s getting more than one. All bottles will include a different number, which would refer to Messi’s goal tally. #FCB 🇦🇷⚡️ pic.twitter.com/MErc9ui4AI

— Here’s the naked truth about Gritty, the official and somewhat frightening mascot of the Philadelphia Flyers who has been described as an acid trip: He has been cleared to return to the ice (barring a positive COVID test) by the Philadelphia Health Department, as well as the NHL, after a petition attracted more than 10,000 signatures and a letter of support from a pornographic website.

A vice president at Stripchat wrote that if Gritty wasn’t allowed to cheer for the Flyers at Wells Fargo Center, he was prepared to offer him a space on the site’s homepage. In the letter, Stripchat claimed it attracted 906,181,416 new users in 2020, none of whom, it can be assumed, seemed terribly interested in driving the Zamboni.

➖"We want to turn you into a global superstar. … The Philly Phanatic can even join your stream."

➖Gritty is currently petitioning the NHL to allow him to attend games this season pic.twitter.com/IxTJk6kK5T

I can't get over the face shield on Gritty. https://t.co/1aIJxf0NzF

If you were among those who kept alive a Cal Ripken-esque streak of watching “A Christmas Story” this year, it’s possible (but unlikely) you noticed a scene in which three baseball cards are tacked to the wall above Ralphie’s bed.

Even more astute is the eyesight of a Twitter user named Tom Shiber, who, after posting a magnified image of the cards, revealed their origins: a 1940 Play Ball image of New York Giants’ outfielder Johnny Rucker and T206 tobacco cards depicting pitcher Ed Ruelbach, who tossed a one-hitter for the Chicago Cubs in the 1906 World Series; and Jimmy Hart, an obscure infielder for the 1901 Baltimore Orioles who was first American League player suspended for punching an umpire.

I triple dog dare you to come up with a better trivia question.

— Beauty of A Game (@BeautyOfAGame)