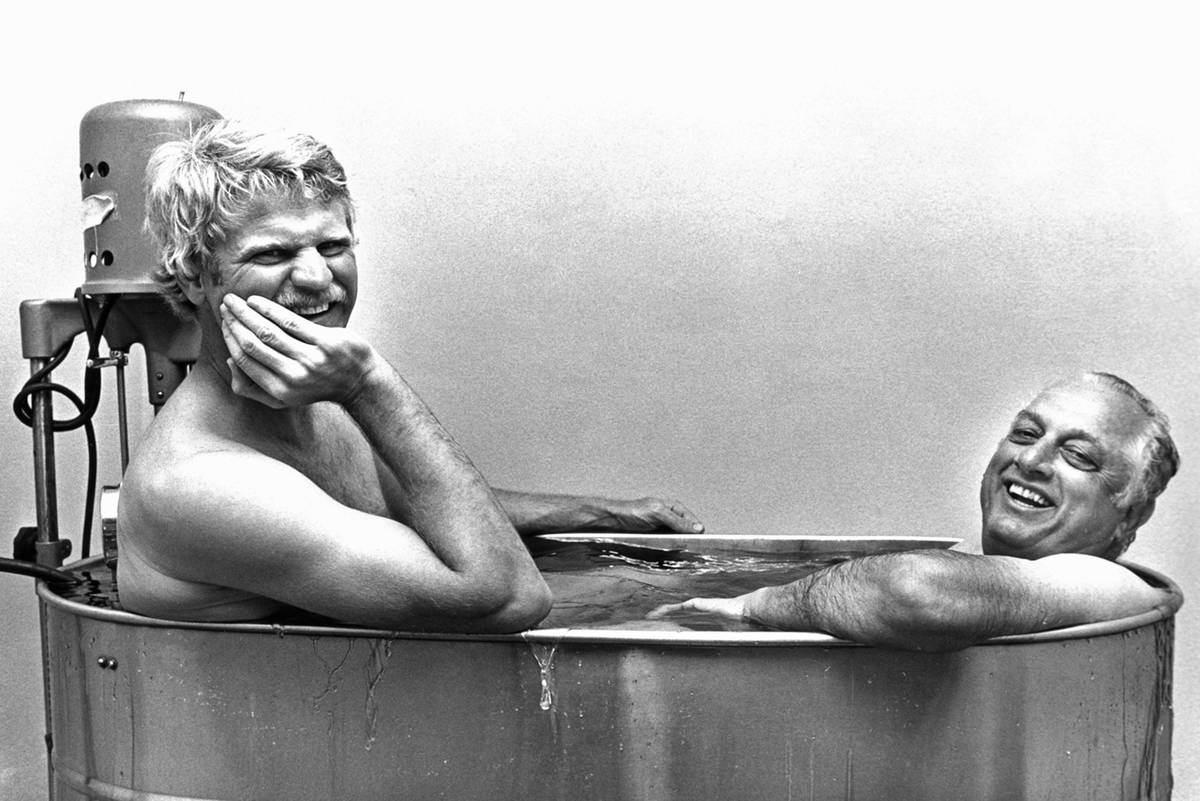 It’s a good thing a picture is worth a thousand words because I have only about 250 to describe what’s happening in the one that appears with this story.

It shows Aviators broadcaster Jerry Reuss sharing a whirlpool bath with baseball Hall of Famer Tommy Lasorda, who was 93 when he died Thursday. This happened in 1985, when Reuss was pitching for the Dodgers and Lasorda was managing them.

It’s one thing for a manager to have a close relationship with his players. This photo is quite another thing.

It is my favorite thing from Reuss’ book, “Bring in the Right-Hander!”, the cover of which also shows he and Lasorda together. The former, a left-hander, is frowning with hands on hips; the latter, slightly out of focus, is strolling to the pitcher’s mound to do what the title demands.

Reuss tells stories almost as well as his manager did. But because of space constraints, you will have to settle for the Cliffs Notes version of the one behind the whirlpool photo:

The two men in the tub are laughing. But, if the next time it was time to bring in the right-hander, and he was brought in an inning or two prematurely, this photo probably explains it.

Jerry Reuss (@JerryReussMLB) was an early interview for this book project. His book is a great read. pic.twitter.com/SmMtHnznXh

— Jerry Reuss said Tommy Lasorda had a great relationship with the media, though sometimes one had to be careful how one phrased a question — something former Las Vegas Stars broadcaster Paul Olden learned when he was a radio reporter covering the Dodgers and asked for Lasorda’s opinion of Dave Kingman’s three home run performance against the Dodgers.

Olden, who went on to become the public address announcer at Yankee Stadium and the Super Bowl, told the New York Times: “I jokingly say that in my obituary in Southern California that will be in the first paragraph. In my obituary in the East Coast, it won’t even be mentioned.”

— In the aftermath of the attack on the Capitol, I came across a security plan for how to handle a large crowd at a public gathering. Dot maps, flow plans, barricades, buffer zones, steel sliders, fencing and canine and equine patrols were among the buzzwords used.

The plan consisted of about six paragraphs with a couple of thoughts tacked onto the end. You could have written it all down on a cocktail napkin. Or in a Facebook post. Which is what Daren Libonati did, based on his experience as a former Sam Boyd Stadium and Thomas & Mack Center director and promoter of local concerts and special events.

Some people use social media to incite a riot. But had the Barney Fifes in Washington only friended Libonati beforehand, it might have even prevented one.

“This is the Nevada Wolf Pack scoring a touchdown against the “home team” San Jose State Spartans, going into an end zone decorated for the New Mexico Lobos at Sam Boyd Stadium, the former home of the UNLV Rebels,” wrote Grammer above a video of the scoring play.

This is the Nevada Wolf Pack scoring a touchdown against the "home team" San Jose State Spartans going into an end zone decorated for the New Mexico Lobos at Sam Boyd Stadium, the former home of the UNLV Rebels.