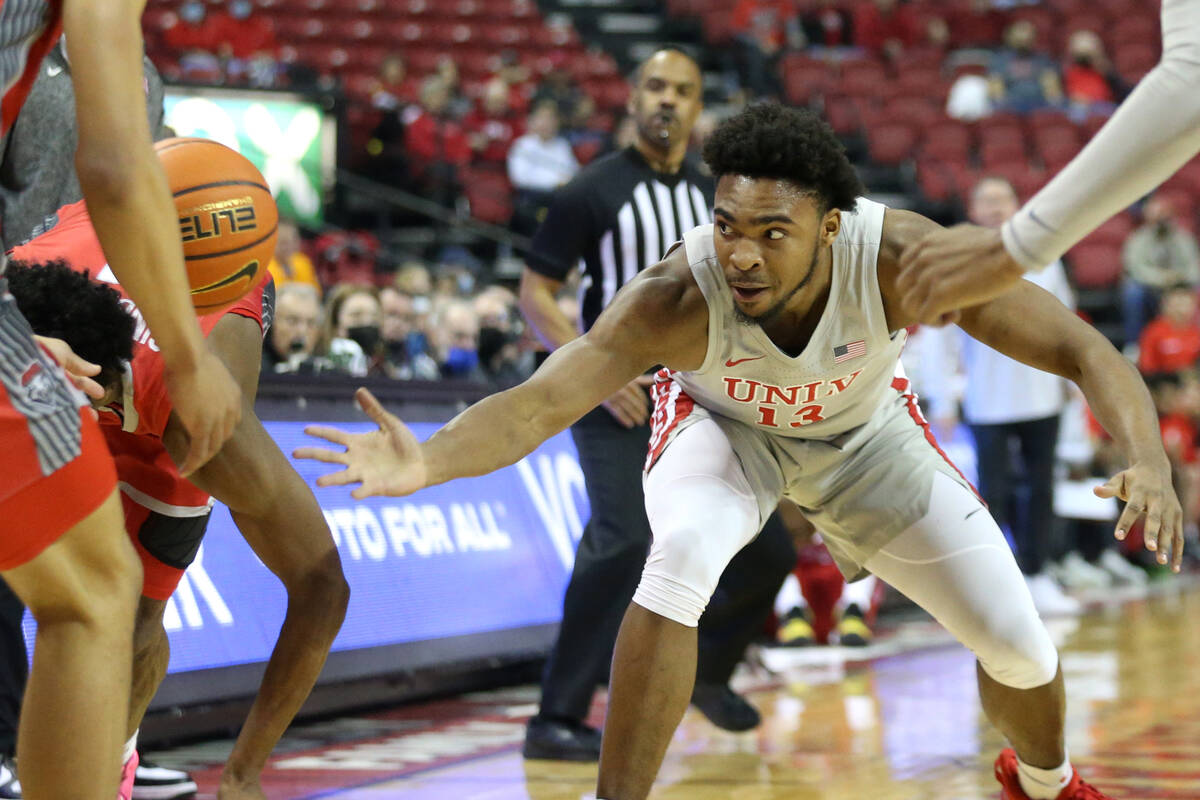 UNLV Rebels guard Bryce Hamilton (13) reaches for the ball during the first half of an NCAA college basketball game against the New Mexico Lobos at the Thomas & Mack Center on Tuesday, Jan. 11, 2022 in Las Vegas. (Ellen Schmidt/Las Vegas Review-Journal) 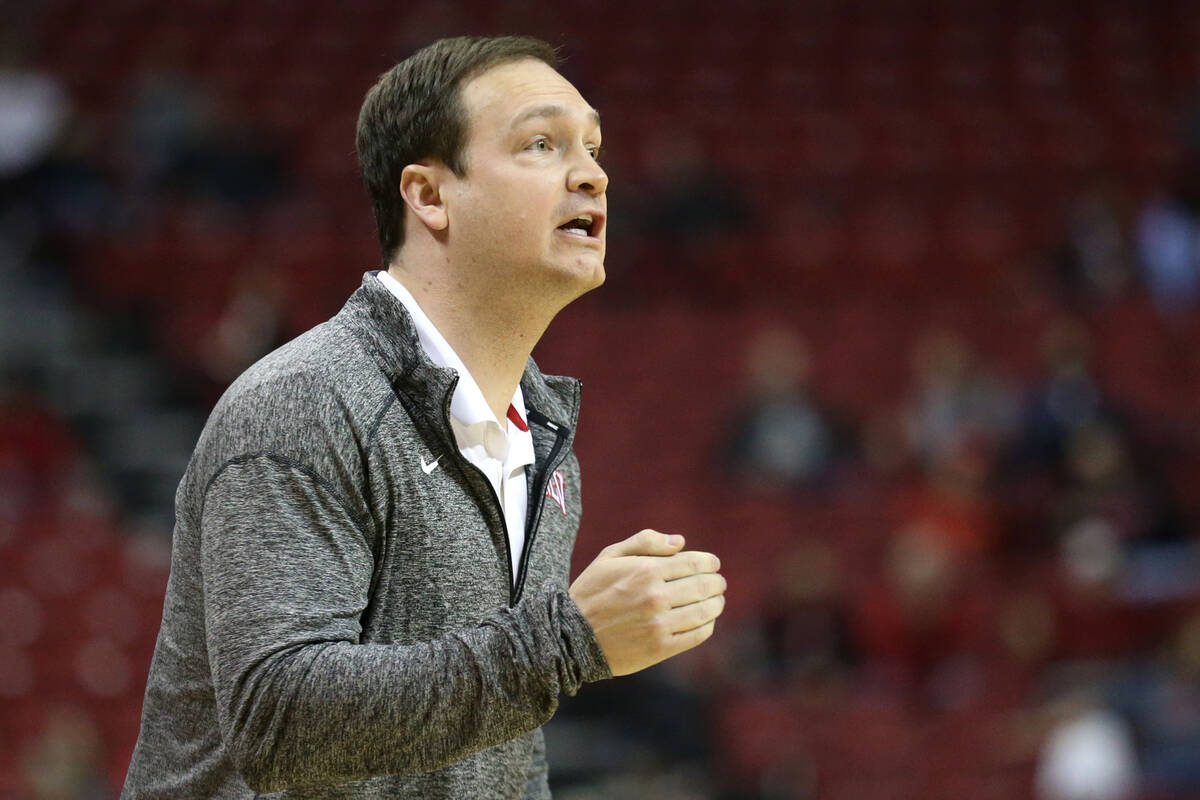 UNLV Rebels head coach Kevin Kruger shouts from he sidelines during the first half of an NCAA college basketball game against the New Mexico Lobos at the Thomas & Mack Center on Tuesday, Jan. 11, 2022 in Las Vegas. (Ellen Schmidt/Las Vegas Review-Journal) 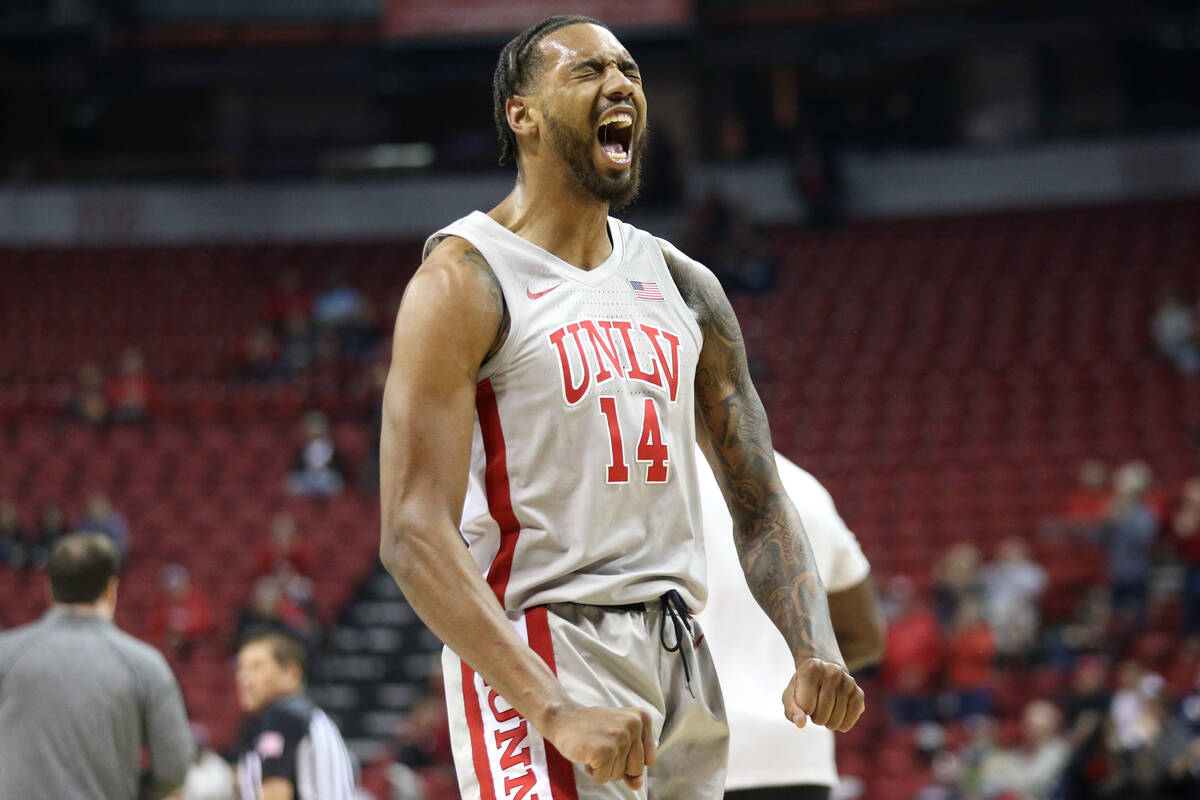 UNLV Rebels forward Royce Hamm Jr. (14) celebrates after scoring against the New Mexico Lobos during the first half of an NCAA college basketball game at the Thomas & Mack Center on Tuesday, Jan. 11, 2022 in Las Vegas. (Ellen Schmidt/Las Vegas Review-Journal) 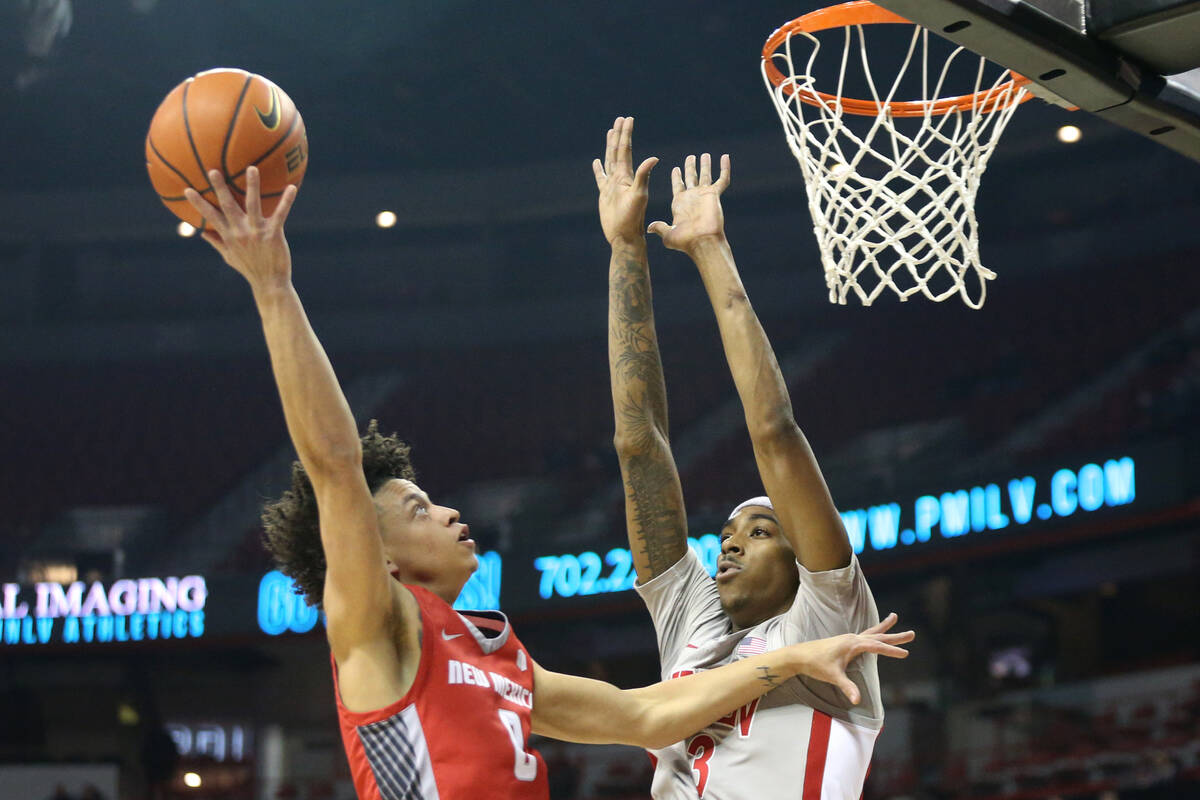 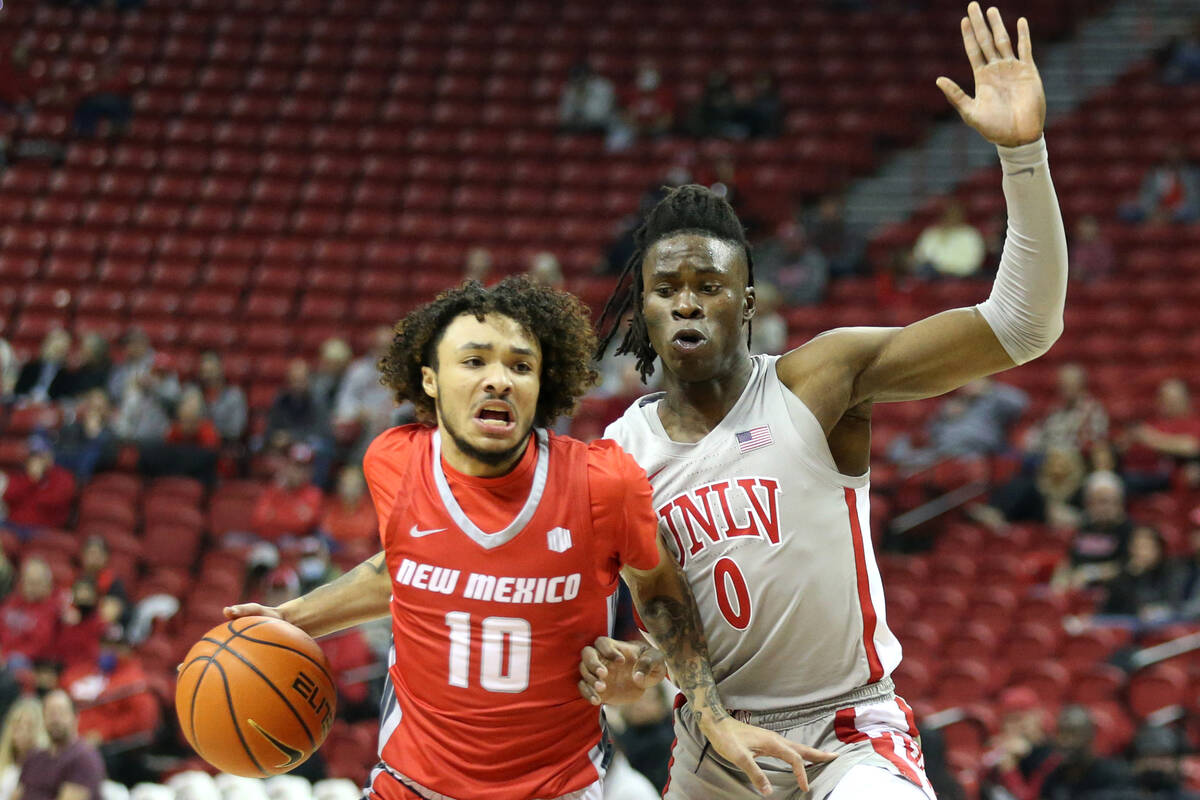 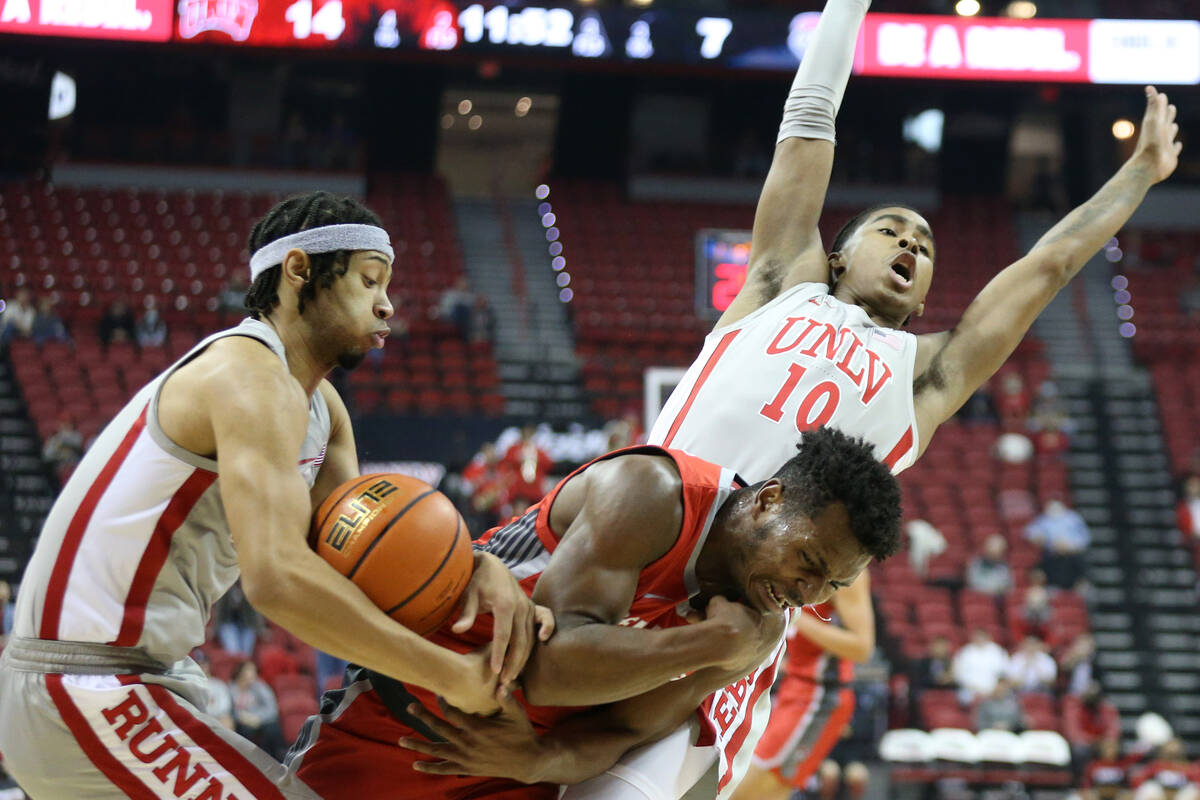 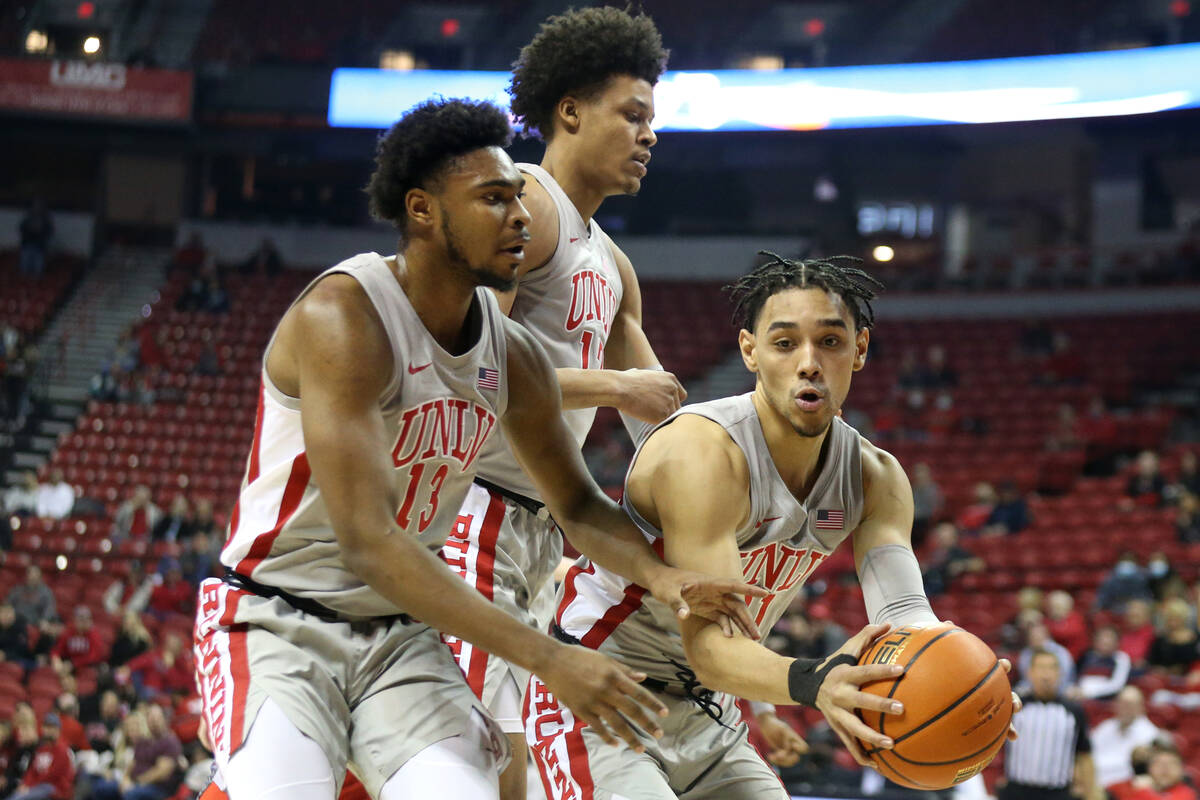 UNLV Rebels guard Marvin Coleman (31) recovers the ball next to guard Bryce Hamilton (13) and center David Muoka (12) during the first half of an NCAA college basketball game against the New Mexico Lobos at the Thomas & Mack Center on Tuesday, Jan. 11, 2022 in Las Vegas. (Ellen Schmidt/Las Vegas Review-Journal) 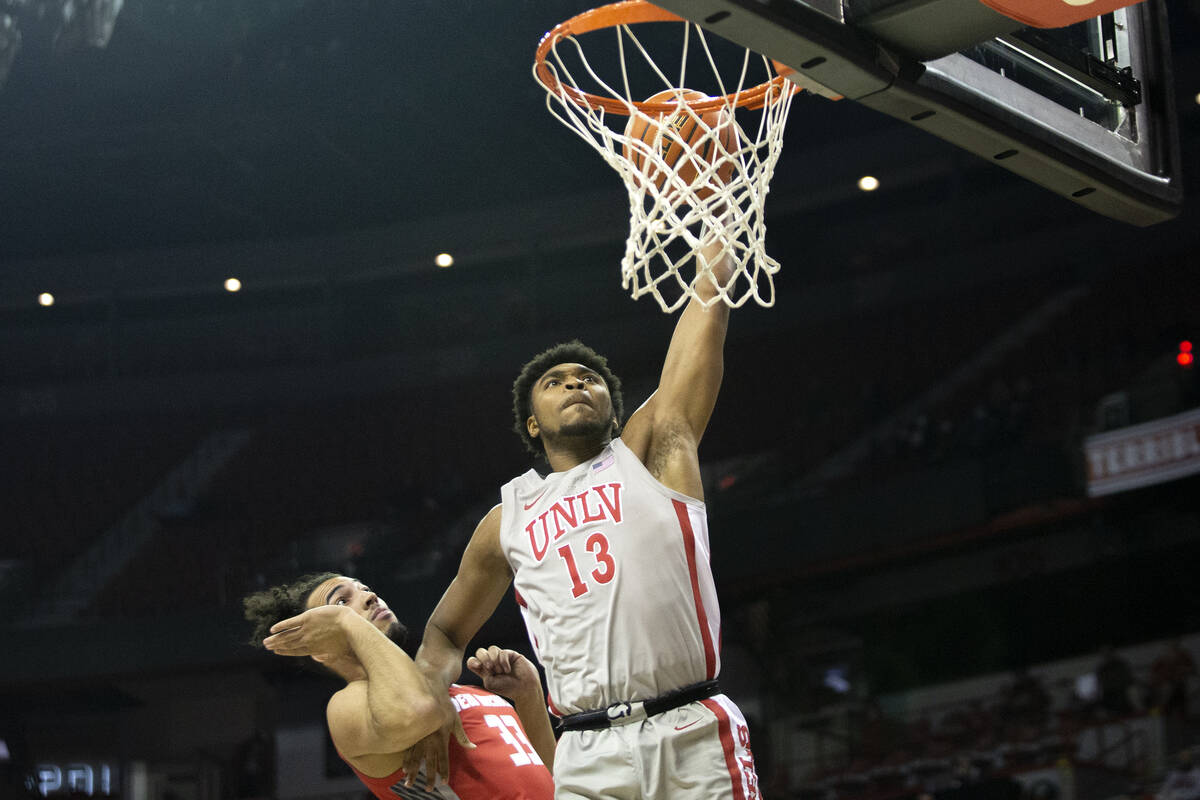 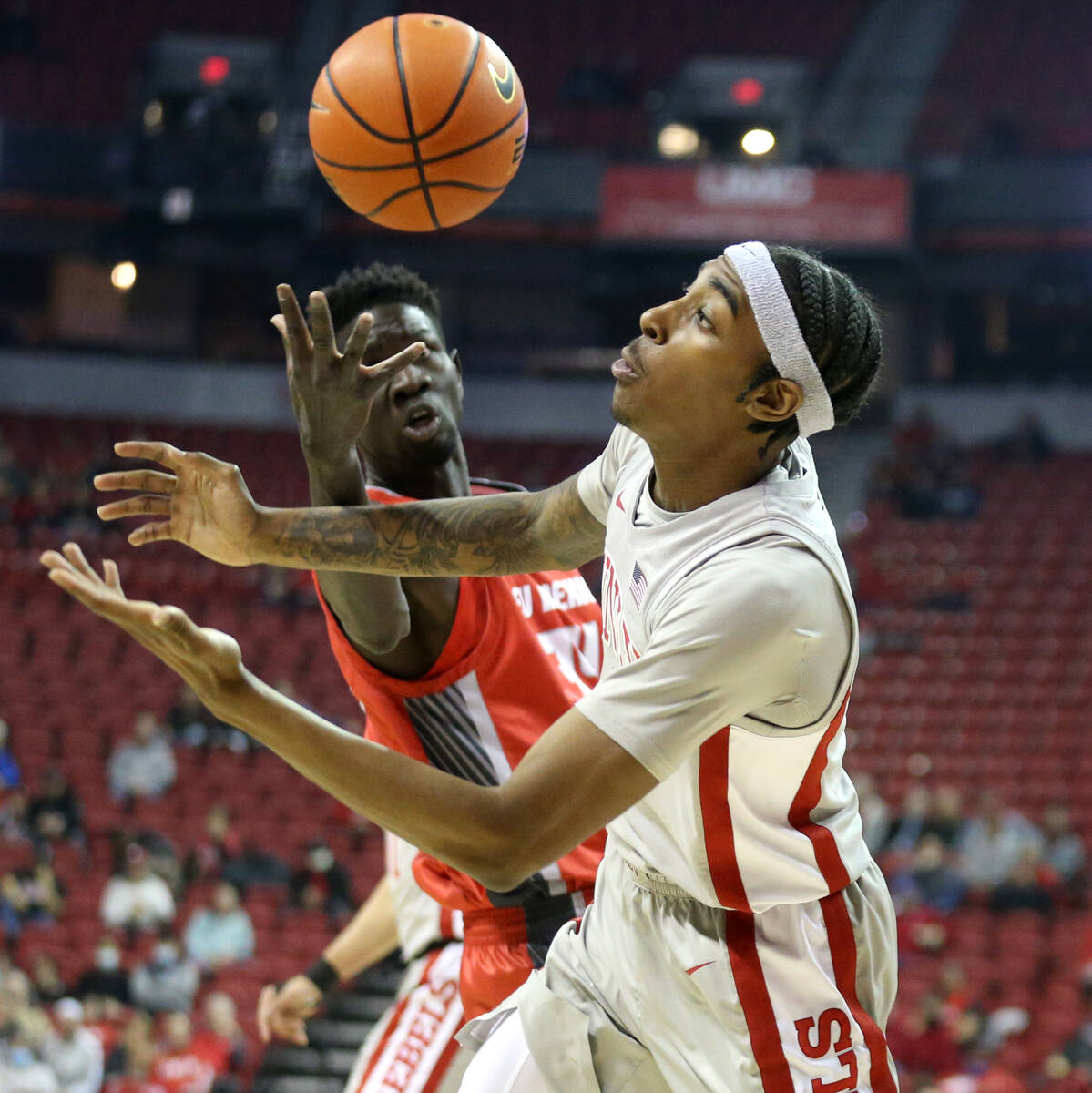 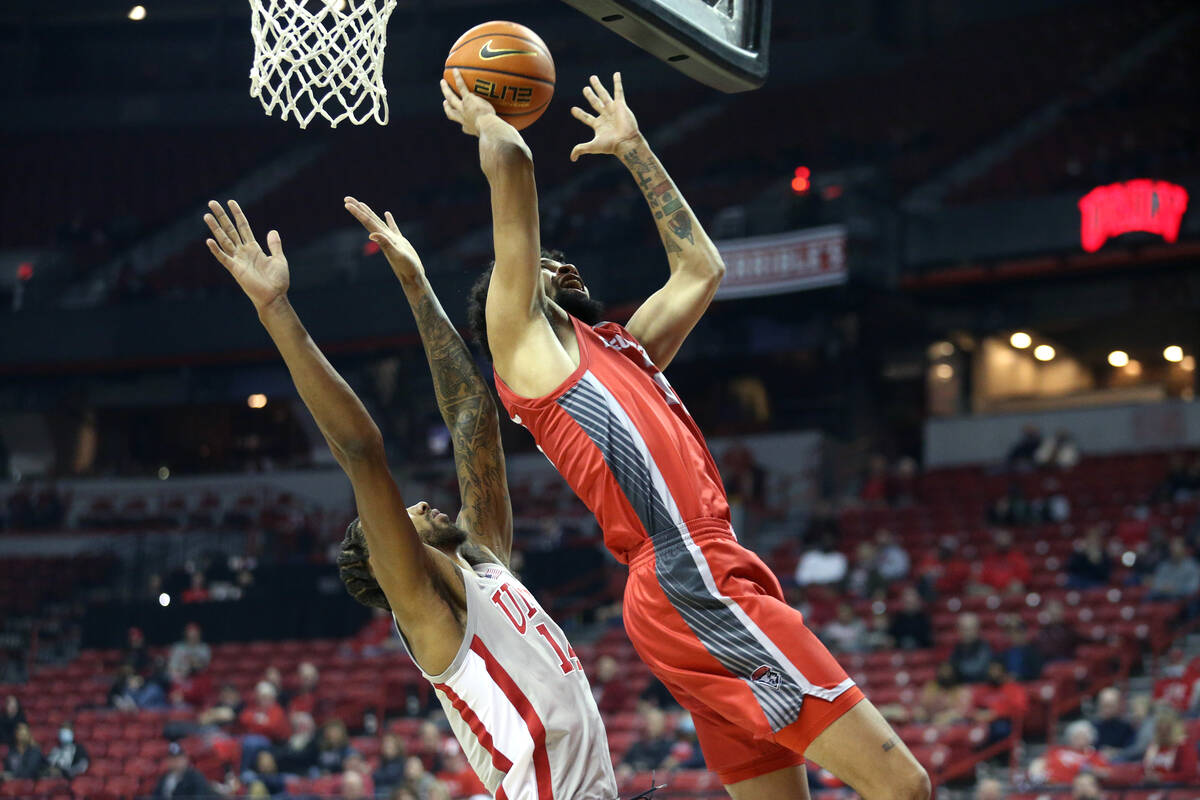 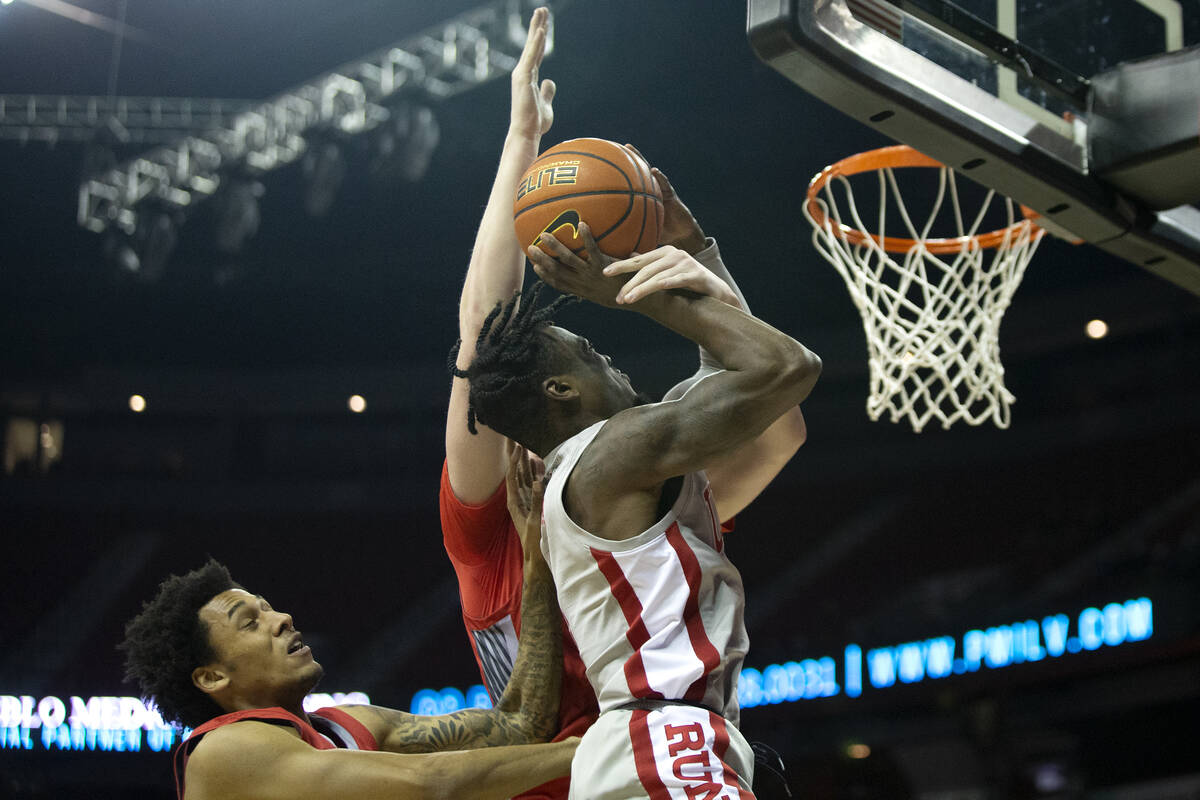 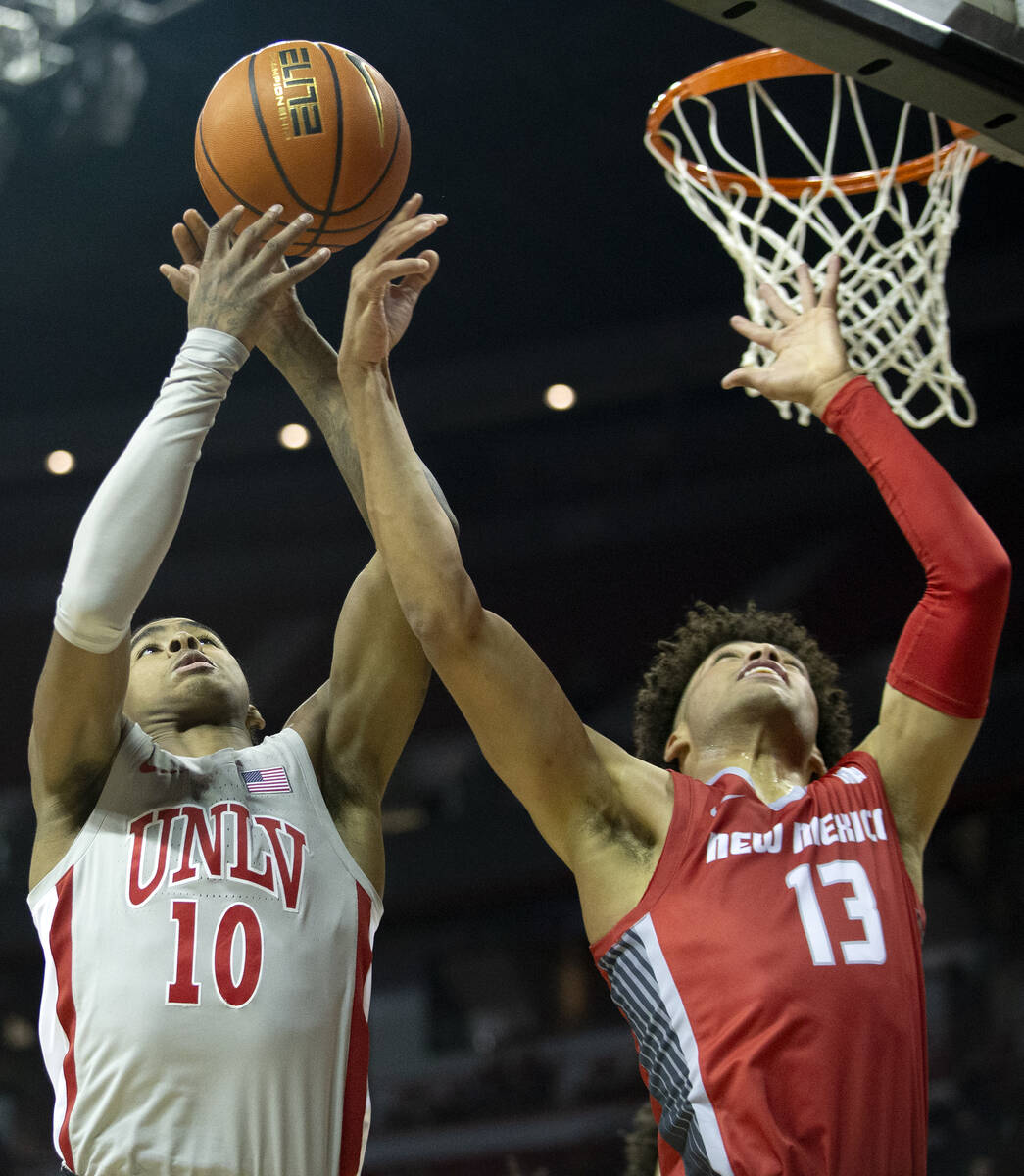 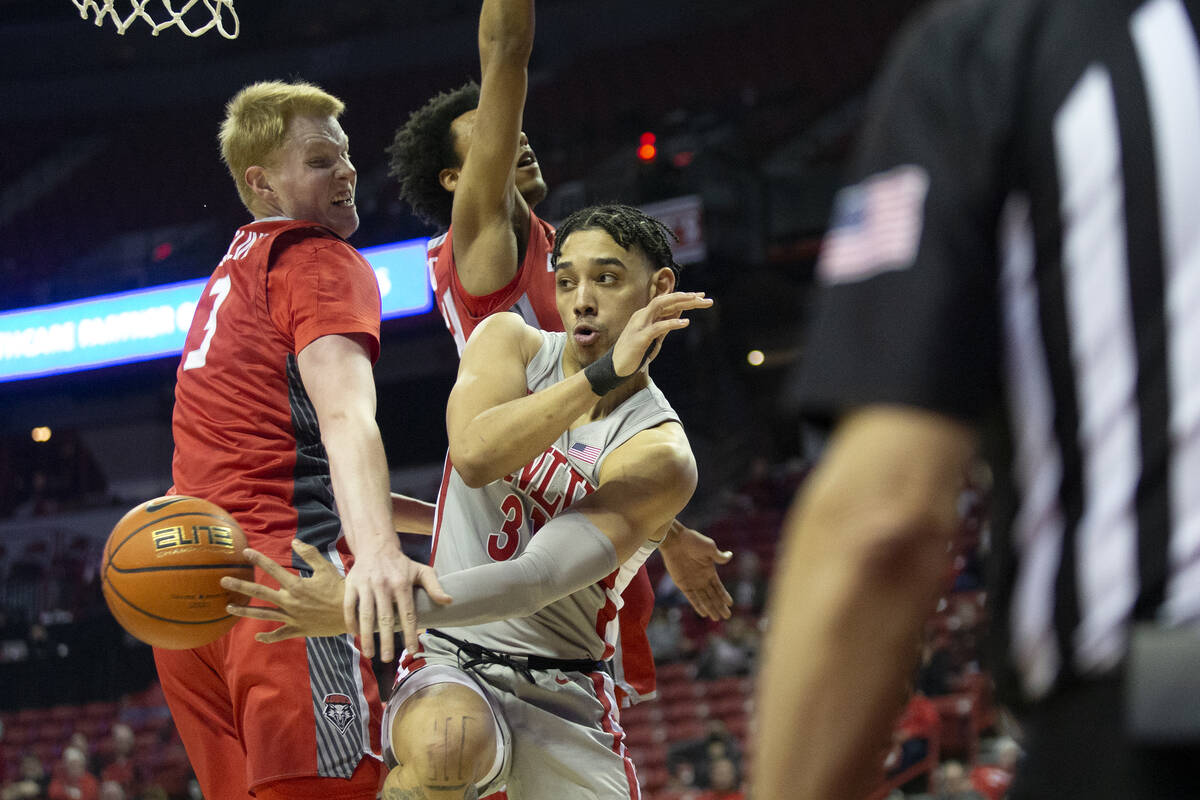 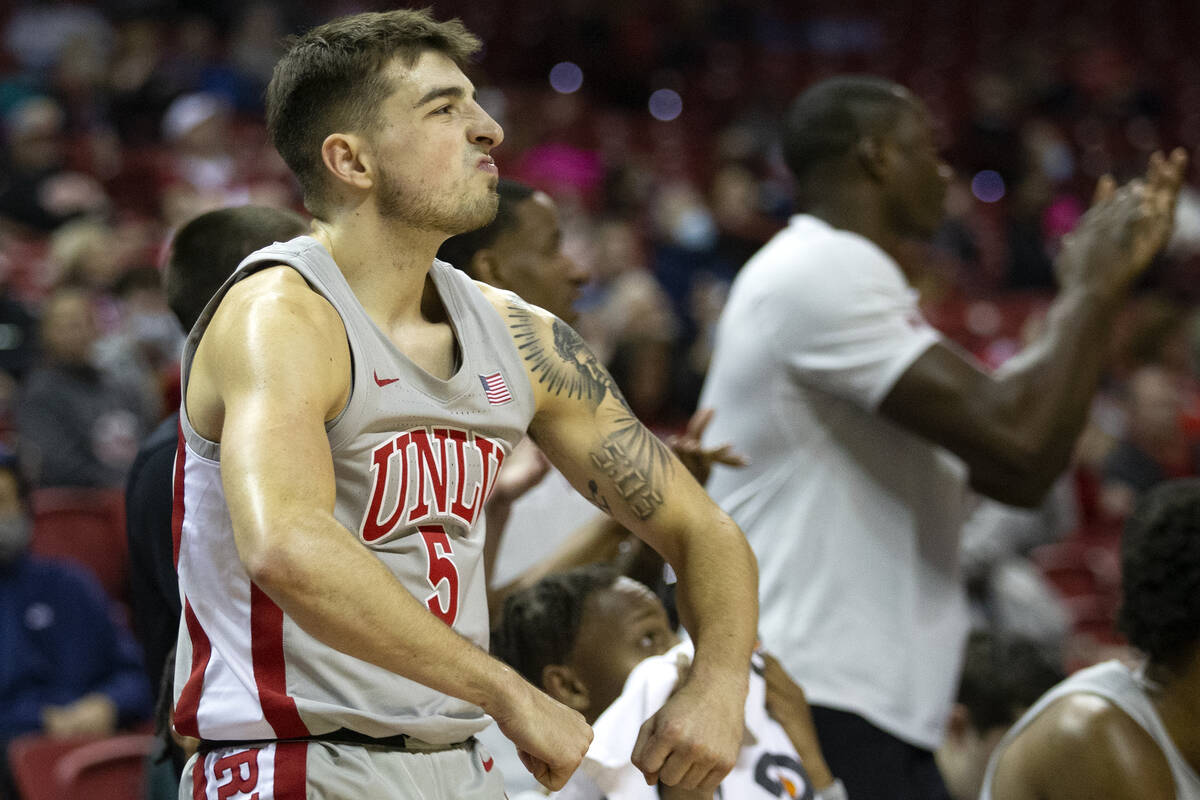 UNLV Rebels guard Jordan McCabe (5) reacts to his team scoring against the New Mexico Lobos during the second half of an NCAA college basketball game at the Thomas & Mack Center on Tuesday, Jan. 11, 2022 in Las Vegas. (Ellen Schmidt/Las Vegas Review-Journal) 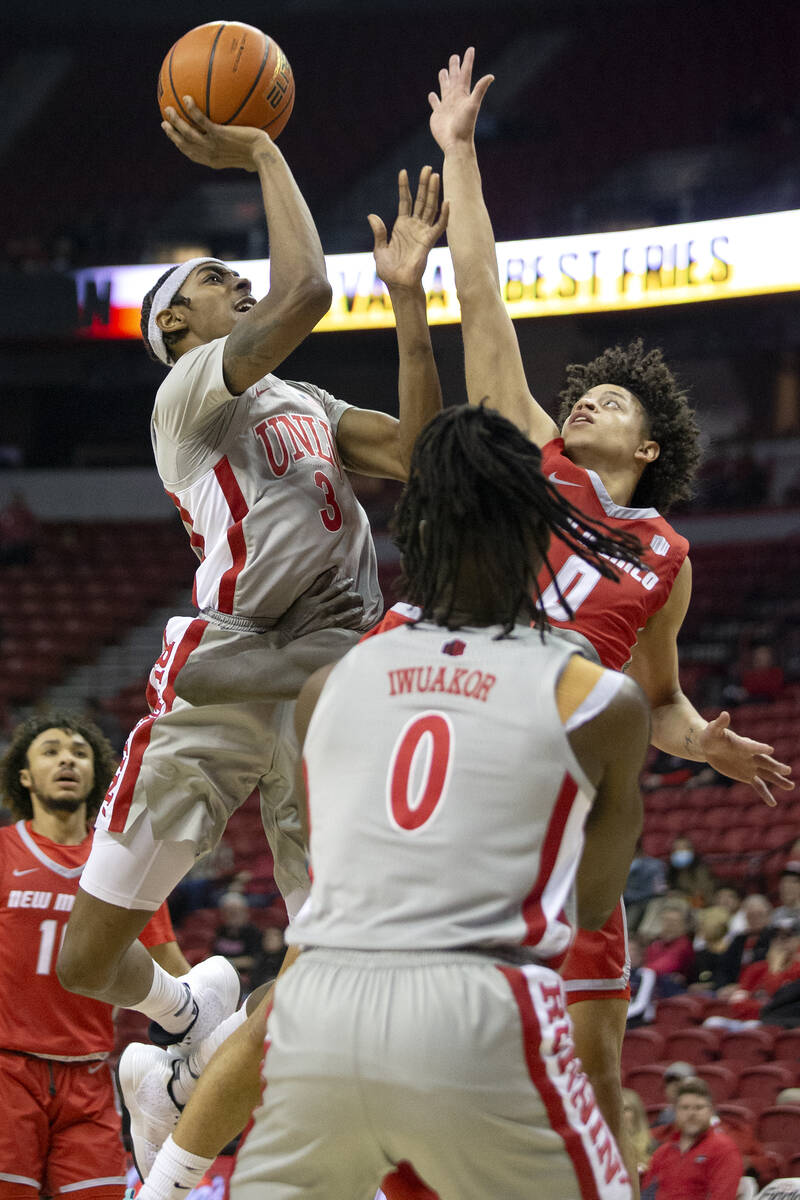 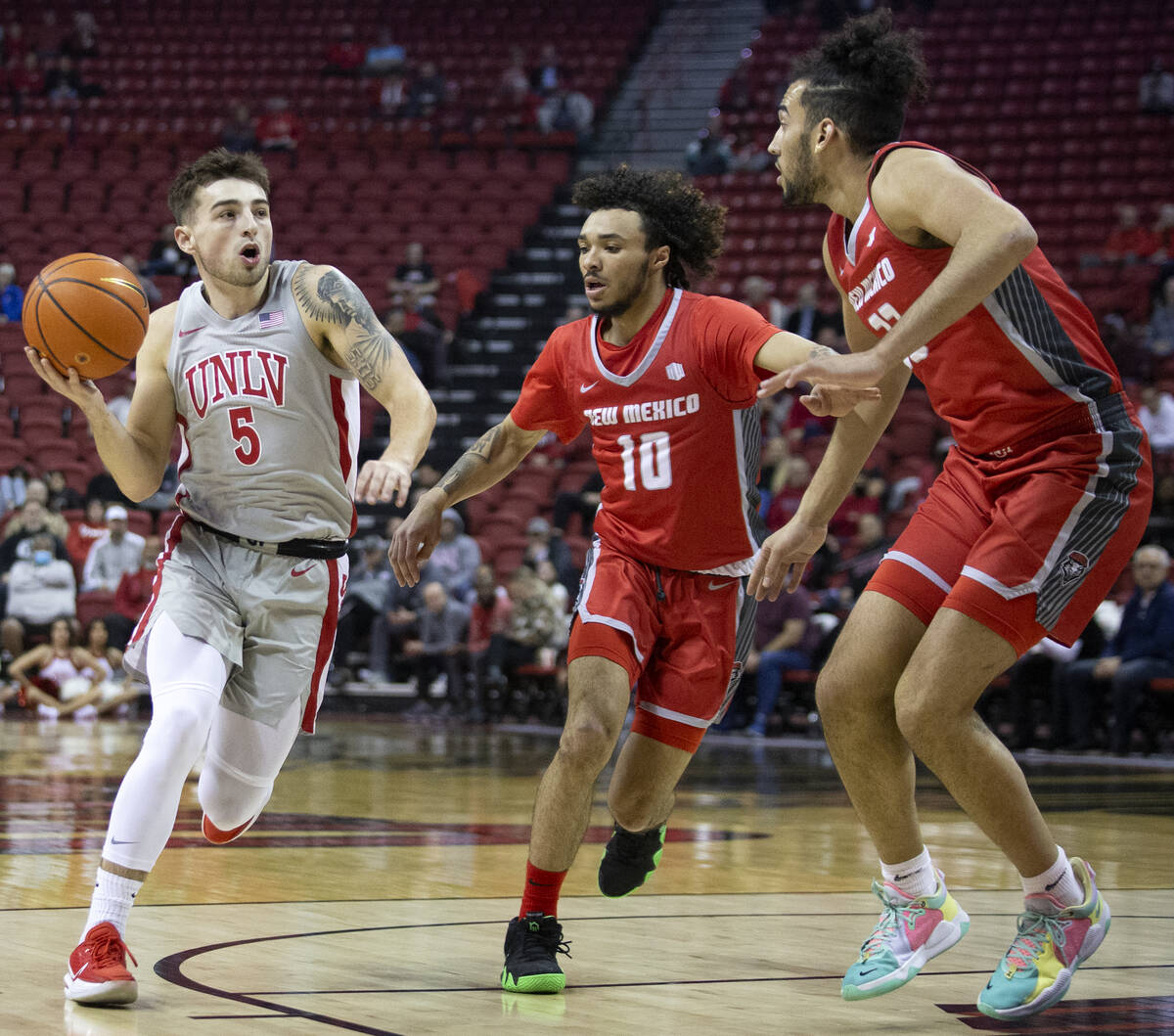 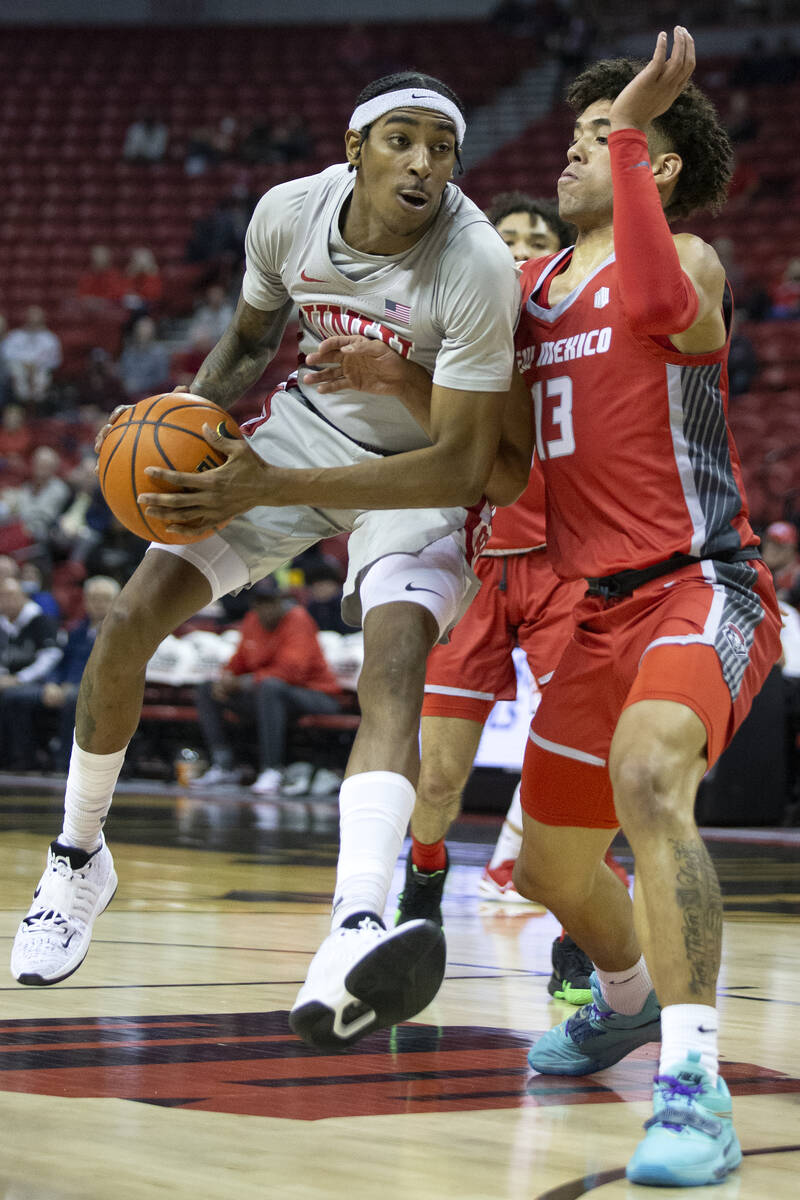 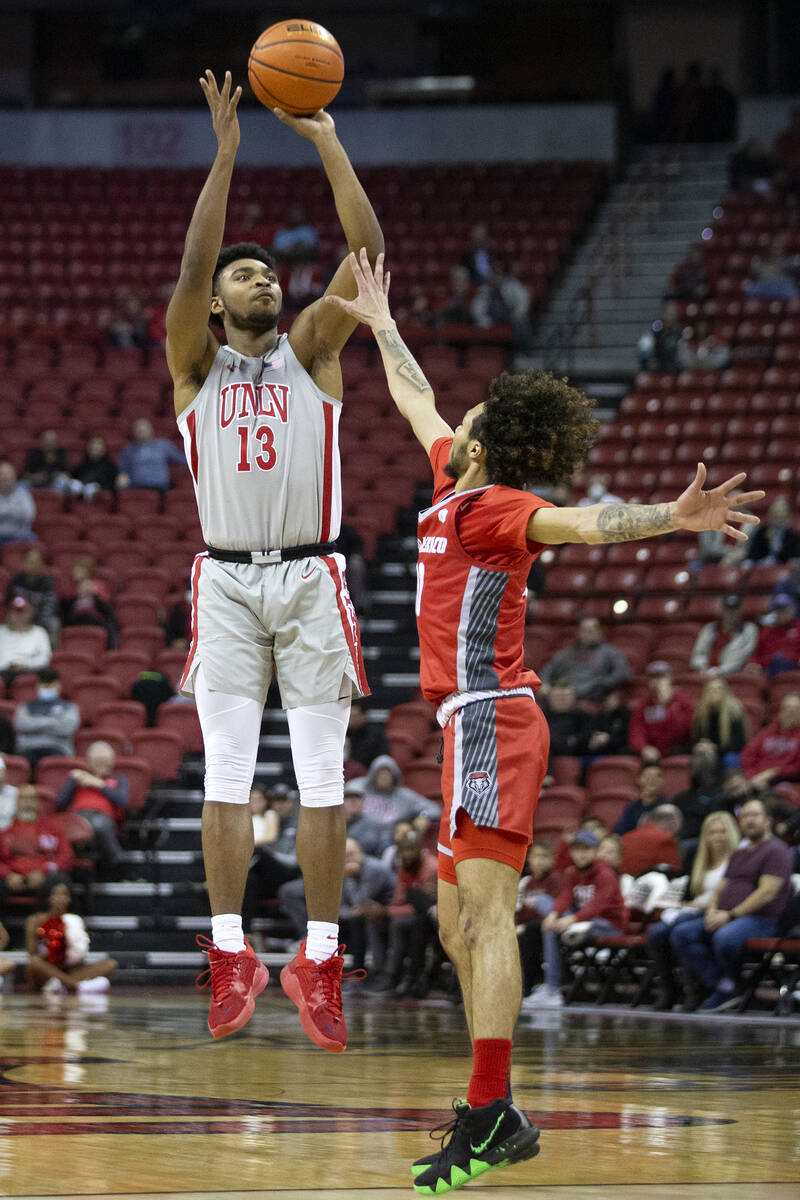 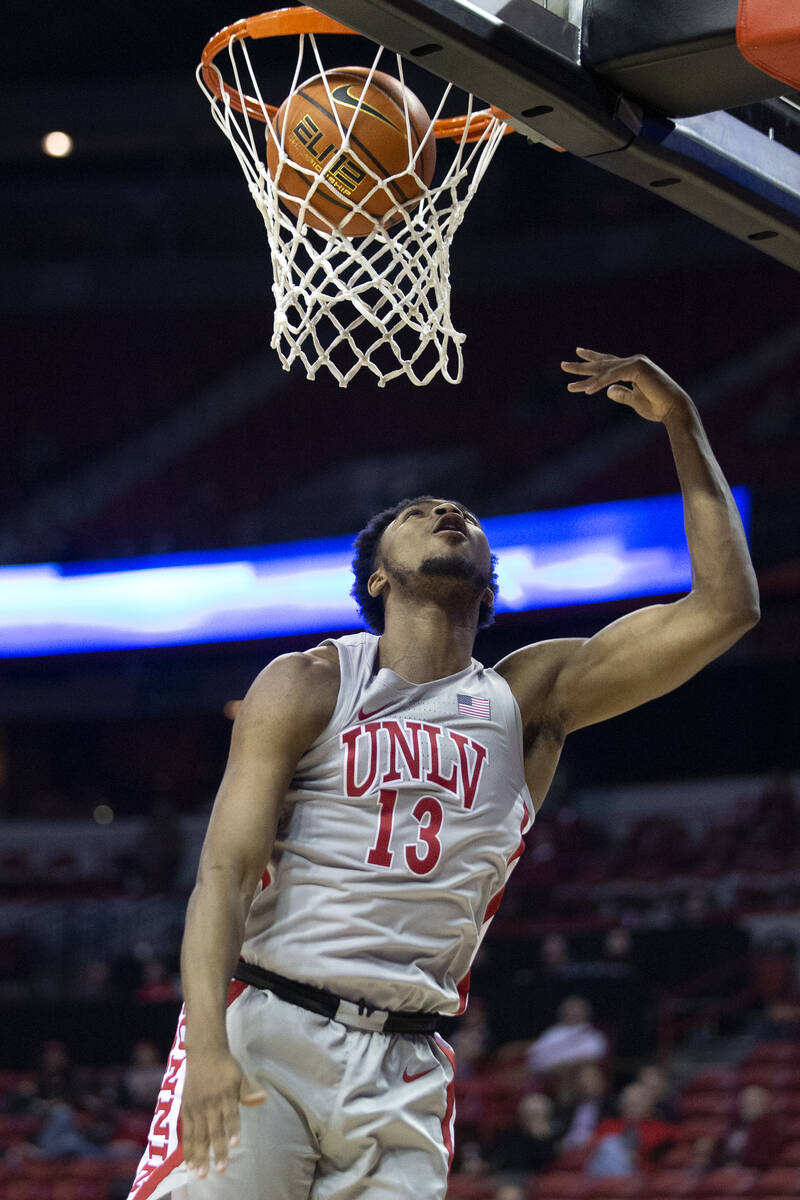 UNLV Rebels guard Bryce Hamilton (13) scores against the New Mexico Lobos during the second half of an NCAA college basketball game at the Thomas & Mack Center on Tuesday, Jan. 11, 2022 in Las Vegas. (Ellen Schmidt/Las Vegas Review-Journal) 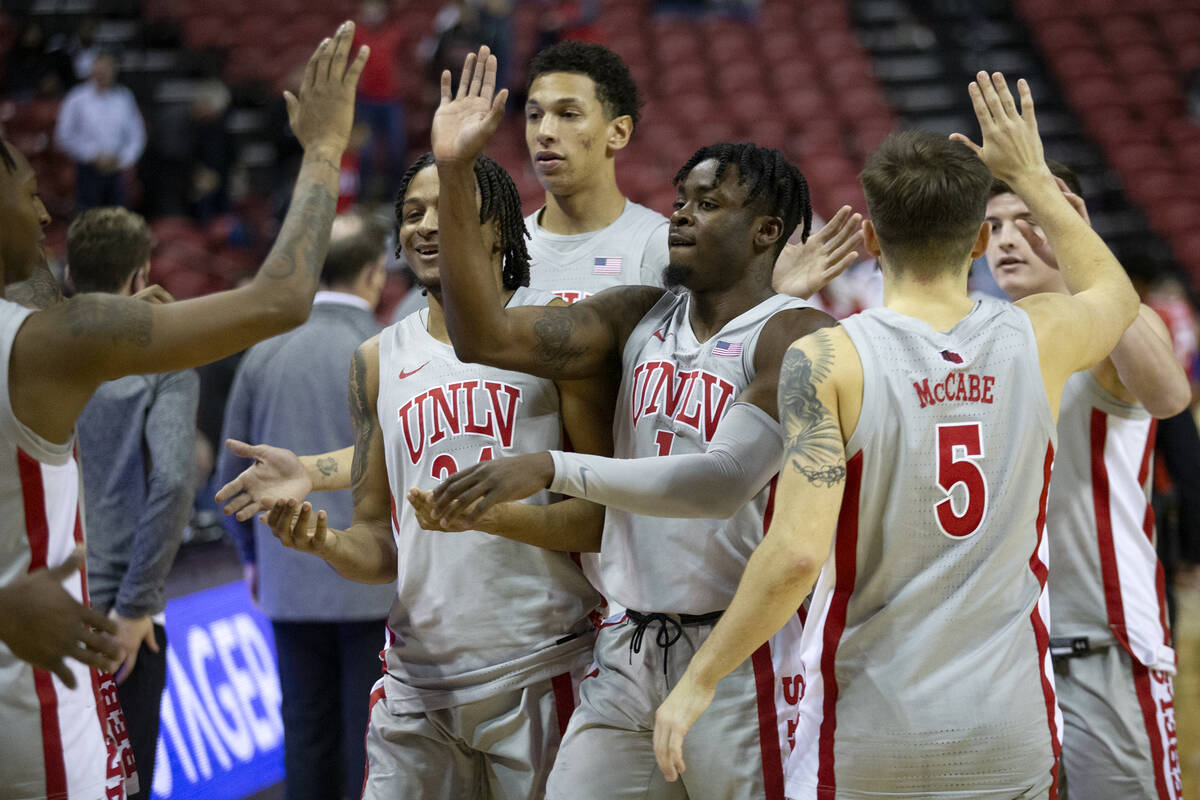 UNLV’s men’s basketball team had only seven available players when it learned earlier this week that its Tuesday home game against New Mexico would go on as scheduled.

But junior wing Donovan Williams didn’t care. So long as he could play basketball again.

“Nobody cares. That’s been our mantra all season. … Nobody cares if we lose if we’re down to seven,” Williams said.

So when the Rebels learned Tuesday that all 14 players would be available against the Lobos after their internal COVID-19 outbreak, Williams said, “it was back to business as usual. So we just prepared the normal way that we usually do. … I think we did a good job.”

The Rebels rolled to an 85-56 victory at Thomas & Mack Center to secure their first conference victory this season. Williams made his first eight field-goal attempts en route to a team-high 29 points on 10-of-10 shooting.

Senior Royce Hamm added 11 points, 13 rebounds and anchored a team defense that held New Mexico to 34.5 percent shooting. UNLV coach Kevin Kruger said he didn’t know the full roster would be available until earlier Tuesday and admitted he didn’t know what to expect after the 10-day layoff that COVID-19 caused.

“I was pretty nervous going into the game,” Kruger said. “They clearly watched the film on New Mexico and understood and respected those guys. … Incredibly proud of them for going out there playing as hard as they did. One game each week is not easy.”

The Rebels (9-6, 1-1 Mountain West) hadn’t played since Jan. 1 as the virus surged through the program. Kruger did not identify exactly how many players had COVID-19, but Hamm said after the game that he had it and was asymptomatic. The outbreak forced UNLV to postpone a game last Saturday at Air Force, though Kruger said he was ready to play with seven players and employ a 2-3 zone defense to limit their energy output.

But they did not have the requisite seven available, thereby altering the practice schedule while players quarantined.

Kruger praised the way they prepared from afar. The Rebels opened with a 12-0 run against the Lobos, who were without coach Rich Pitino because of a positive COVID-19 test. Assistant coach Eric Brown served as the acting head coach, though he couldn’t seem to slow the resurgent Rebels.

Because UNLV was deliberate and efficient with its ball and player movement, primary ball handlers probed the paint and attacked the basket. Players off the ball rolled and cut with a purpose, drawing help and creating open shots from the paint and perimeter.

The Rebels were equally effective defensively, employing some full court man-to-man pressure to slow New Mexico at the point of attack. On-ball defenders contained drives and help defenders rotated on time to contest at the basket or force kickout passes.

Kruger utilized the same starting lineup for the third consecutive game, and the reserves played regular minutes — signaling somewhat of a return to normalcy after a challenging week within the program.

“It was a little bit of a weird feeling. Kind of went from ‘What’s going on? Who are we going to have? What are we going to do?’ … To almost just like everybody there in a snap of a finger,” Kruger said. “It was good and they showed they didn’t lose too much in isolation. That was great to see as well.” 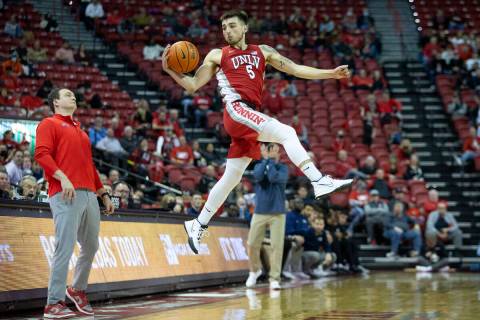 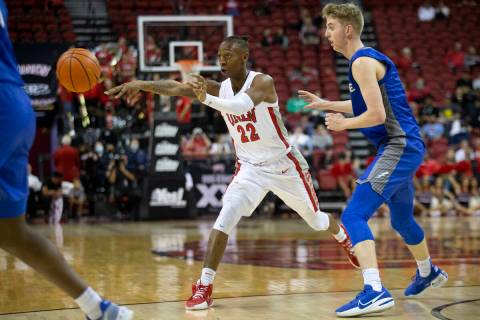 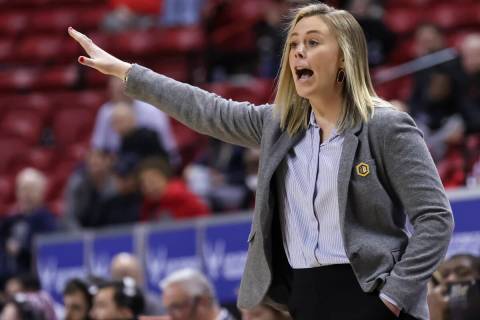 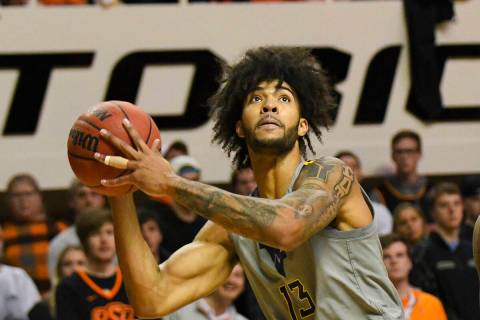 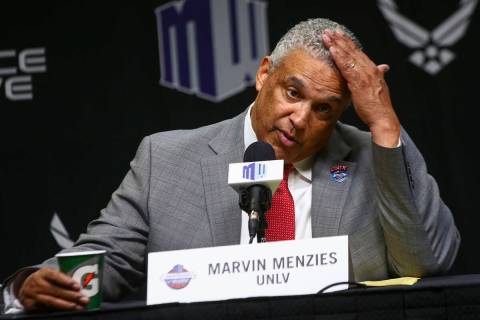 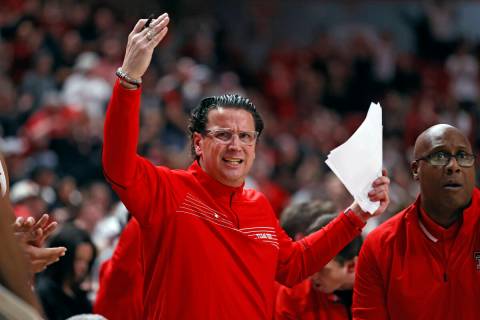 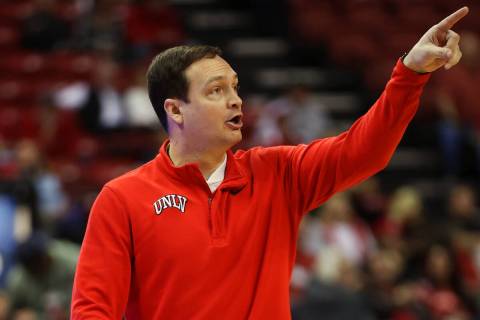 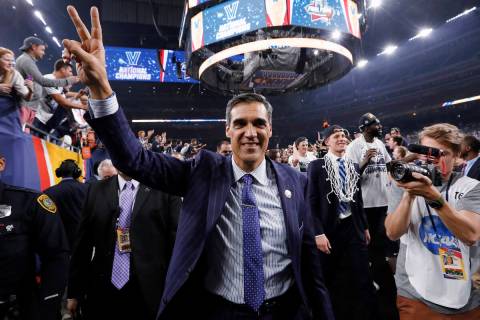