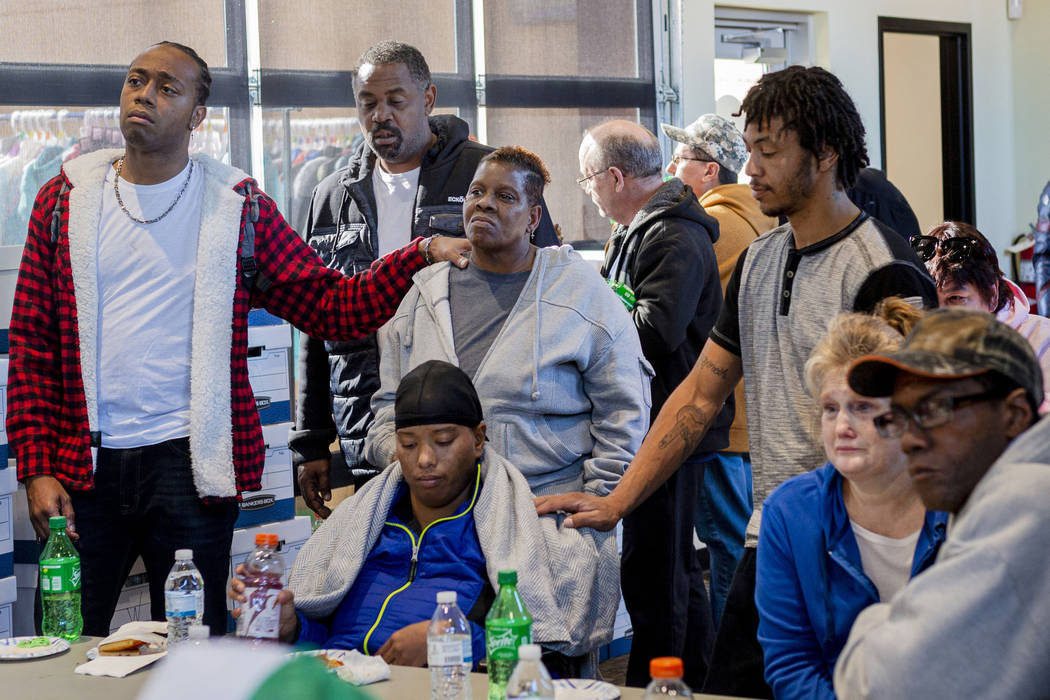 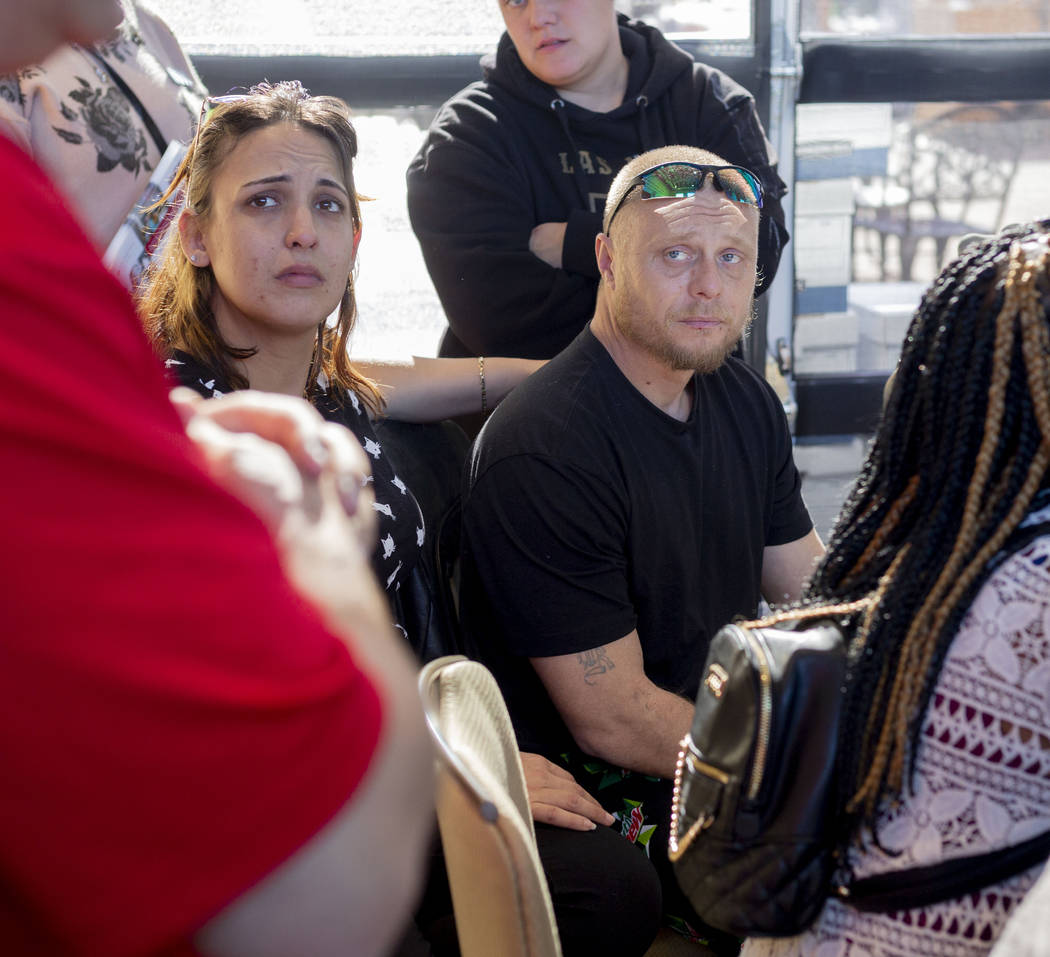 Tenants of the Alpine Motel Michelle Akens, left, and Richard Akens listen to a member of the Red Cross speak during a luncheon at SHARE Village Las Vegas in Las Vegas on Monday, Dec. 30, 2019. Elizabeth Page Brumley/Las Vegas Review-Journal) @EliPagePhoto 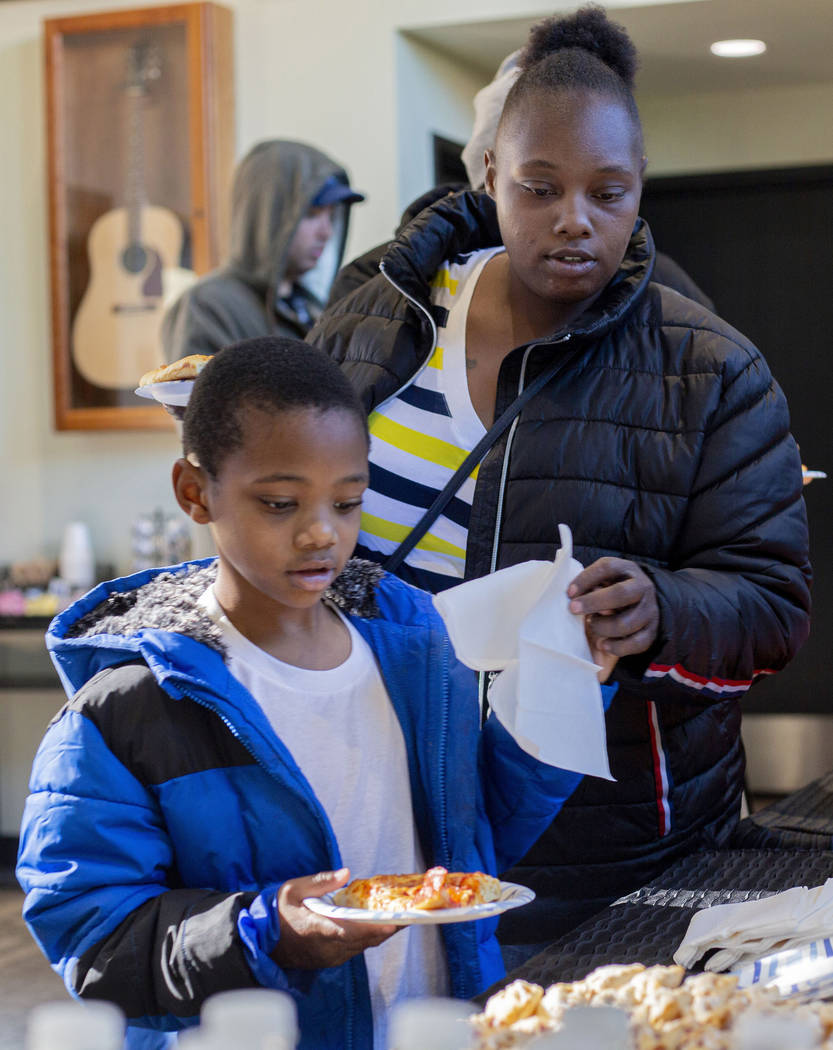 Andru Roach, 7, and Dayshena Thomas receive a meal during a luncheon for the tenants of the Alpine Motel at SHARE Village Las Vegas in Las Vegas on Monday, Dec. 30, 2019. Elizabeth Page Brumley/Las Vegas Review-Journal) @EliPagePhoto 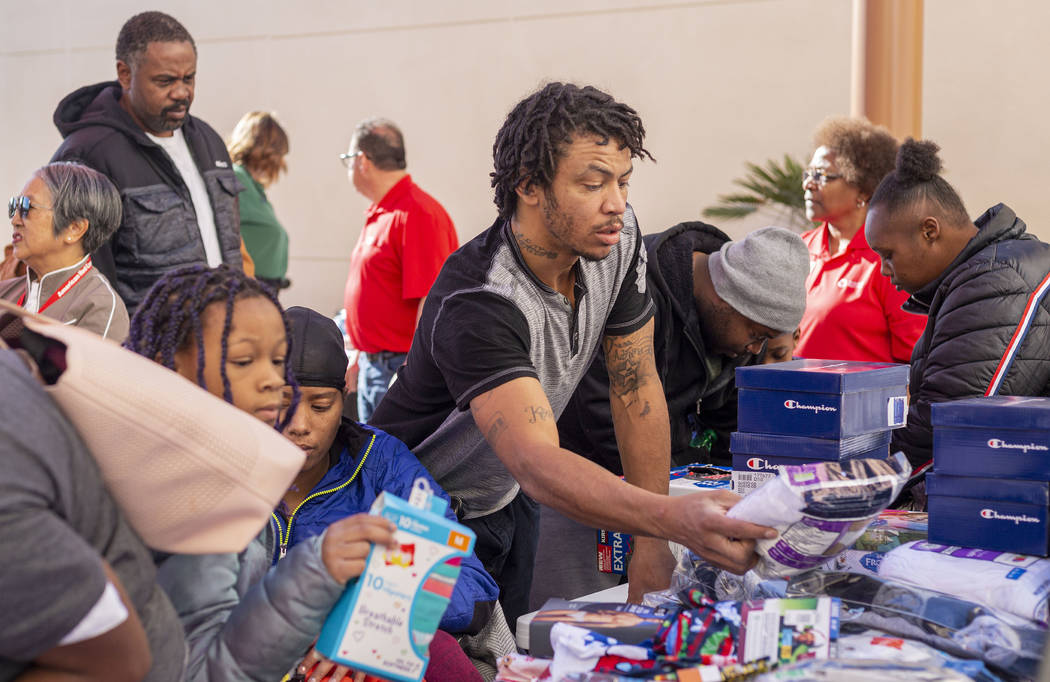 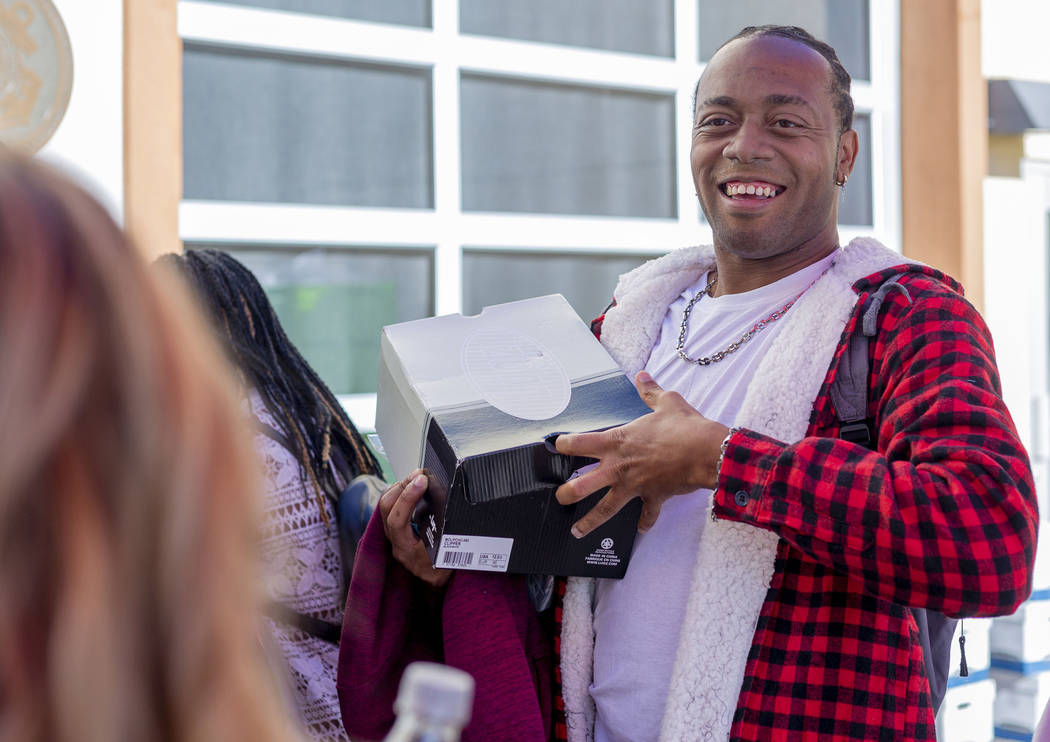 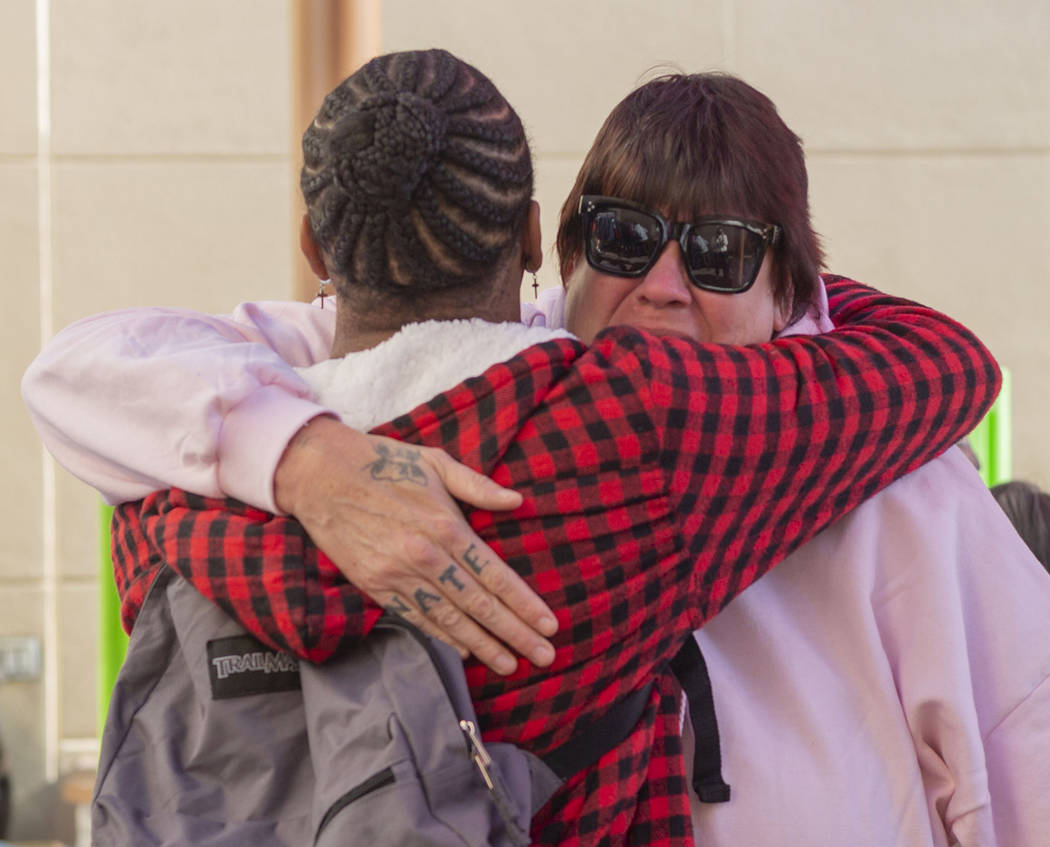 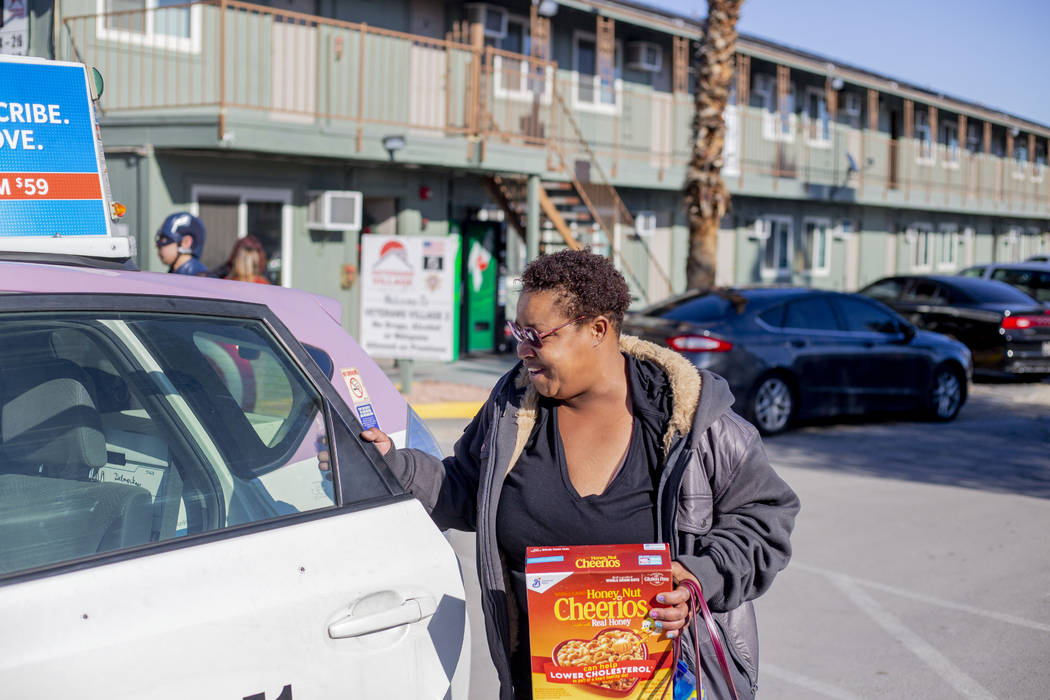 More than 60 people displaced by the deadly Alpine Motel Apartments fire were invited to lunch Monday in downtown Las Vegas, where they also received donations gathered over the past week.

Former Alpine residents recounted stories of Don Bennett, 63, a beloved maintenance man who died saving others, and “Miss Cynthia,” 61, a first-floor resident who also died. Johnathan Wilson asked his neighbors if they’d seen the video of him jumping out a window, while his wife, DeJoy, sat in a wheelchair next to him.

A moment of silence was held for the six people killed, announced by Audrey Palmer, an eight-year resident and former security officer at the Alpine.

“Everybody that came and went from the Alpine, we family,” Palmer said. “And we still family, no matter where we go.”

Palmer pointed to Floyd Guenther during her brief speech, and teared up while thanking him for saving her life. Guenther said he woke around 3:30 a.m. Dec. 21 and, after noticing smoke on the first floor, banged on every door.

“I started knocking on doors and pulling fire alarms. None of them worked,” Guenther said.

After lunch Monday, children collected toys from under a Christmas tree, dogs and cats were fed and residents took home a box with their name on it that included blankets, pillows, towels, socks and a 30-day bus pass. Items such as underwear and jackets were displayed on tables for residents to peruse.

Las Vegas police arrived at the end of the luncheon to interview residents. A Metro officer told them police had heard from more than 30 residents but wanted everyone to share what they knew. The district attorney’s office announced last week that a criminal investigation was being conducted.

“I know you’re anxious to get your stuff, but we’re also anxious to get whomever affected your lives forever by having this apartment not up to standards,” said the officer, who declined to provide her name when asked after the speech.

The lunch was hosted at SHARE Village, formerly Veterans Village, 50 N. 21st St., in partnership with the Downtown Vegas Alliance, who worked with the American Red Cross to distribute donations. The Alliance collected more than $13,000, which was handed out in gift cards Monday.

“It has been amazing to see how the community has come out to support you guys,” said Carolyn Wheeler, executive director of the Alliance. “People care, and they’re all so worried about what has happened to you and what the next steps are going to be.”

The Alliance encouraged valley residents still wishing to donate to visit the Nevada Community Foundation, which will be taking online donations.

One anonymous donor gave $10,000 to Bennett’s family Monday morning, promising to “take care of our own.”

“While I did not know Donald Bennett, I was so touched by his heroism. As a fellow Marine who may have also served on Okinawa with him (we are similar in age), this is not surprising though, as Marines are bred that way,” the donor said in a statement to GoFundMe.

Ray Bennett, Don’s older cousin who lived “across the farm” growing up in North Carolina, said Monday that he was moved by the outpouring of generosity and support across the country.

“It has restored my faith in my fellow man, and the family’s faith also,” Ray Bennett said. “It is certainly more than we could have hoped for. We want to extend our love and support to all the victims and love and appreciation for everyone who gave what they could.”