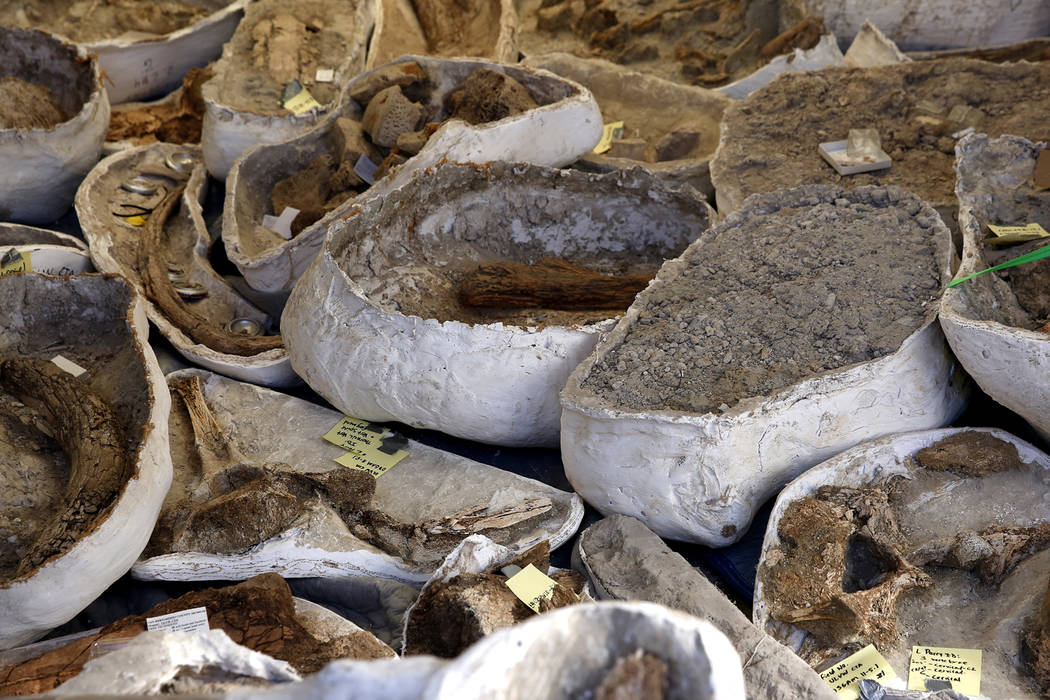 Ice age fossils, which were relocated from the San Bernardino County Museum, sit on a truck at the Las Vegas Natural History Museum before being transferred to a climate-controlled secure facility. Jan. 28, 2018. (Andrea Cornejo Las Vegas Review-Journal @DreaCornejo)

CARSON CITY — Commercial fossil hunters and others who remove historic or culturally significant artifacts from state lands without a permit could see tougher penalties under a measure that seeks to conform state law with its federal counterpart.

Assembly Bill 152 is sponsored by Assemblywoman Daniele Monroe-Moreno, D-North Las Vegas, and seven other lawmakers. The bill, presented before the Assembly Judiciary Committee on Thursday, would assess penalties that take into account the value of items involved.

Current law classifies first and subsequent offenses as misdemeanors and gross misdemeanors, respectively, regardless of an item’s value. Under the proposed change, a first offense involving an object worth less than $500 would be classified an E felony punishable by up to two years in prison, a $5,000 fine or both.

At the top end, a repeat offense involving an object worth more than $500 could rate a B felony, drawing up to 10 years in prison.

In testimony, supporters stressed that the measure was aimed at people who make a living selling such artifacts, not at the errant student who picks up what looks like a pretty rock. Backers nonetheless said they would consider scaling back their proposed penalties.

Supporters of a new 315-acre state park adjacent to Tule Springs Fossil Beds National Monument turned out to back the bill, as did representatives of Native American communities seeking to keep historical artifacts from going to collectors.

“The cultural value of an item is often far more than the commercial value,” said Michon Eben of the Reno-Sparks Indian Colony.

Prehistoric artifacts, such as the tusk of a woolly mammoth, can sell for thousands of dollars each.

Supporters said a 2009 federal law has proven an effective deterrent in national parks and other protected federal lands, safeguarding artifacts without overly penalizing the merely curious who pick up something unwittingly.