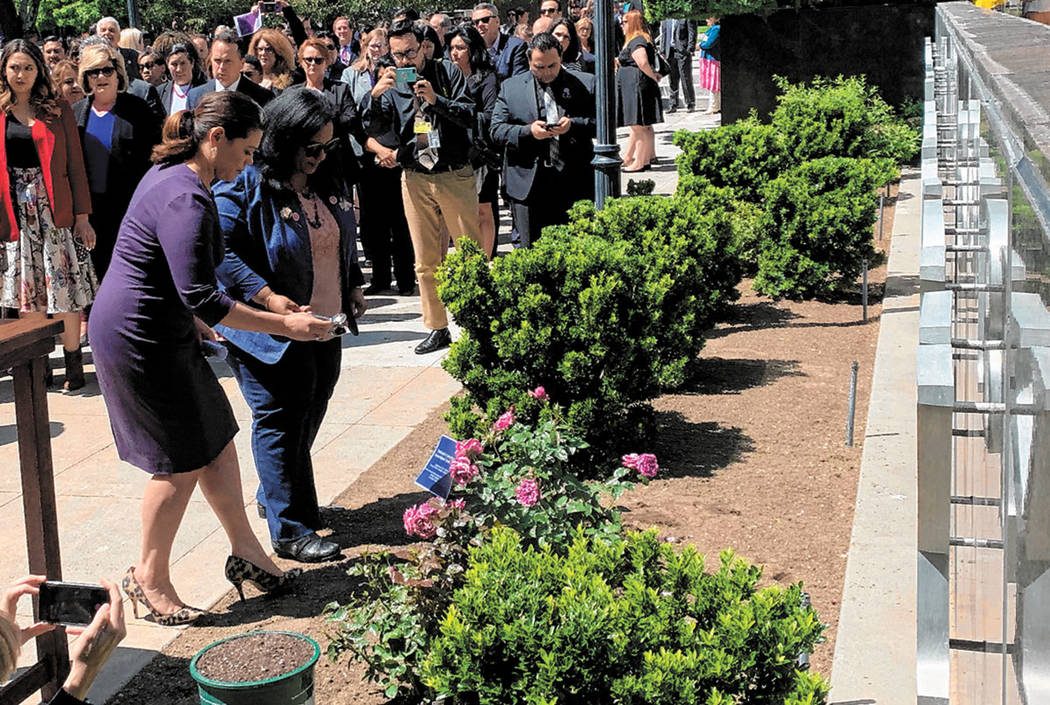 Nevada lawmakers paid tribute Saturday to Assemblyman Tyrone Thompson of Las Vegas in a ceremony outside the Legislative Building in Carson City. Thompson died May 4 after a sudden and short illness. Assembly Majority Leader Teresa Benitez-Thompson, D-Reno, on left, and Assemblywoman Brittney Miller, D-Las Vegas, add soil to the purple rosebush planted in Thompson's memory outside the Assembly wing of the building. (Bill Dentzer/Las Vegas Review-Journal) 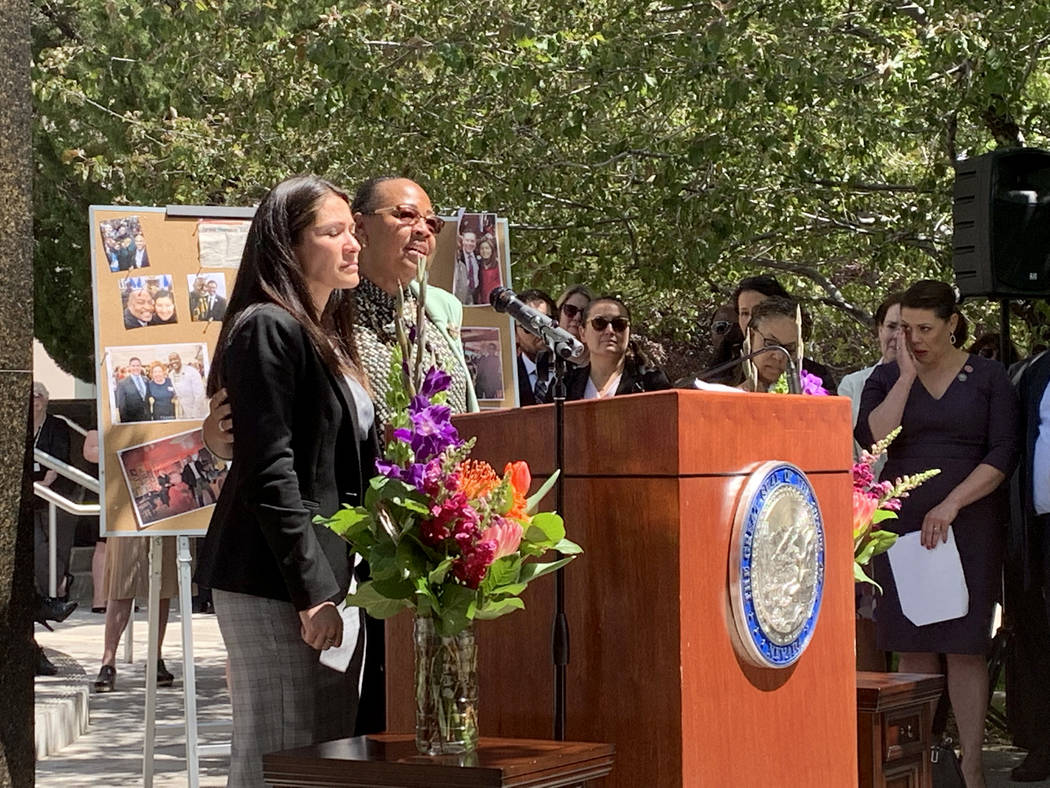 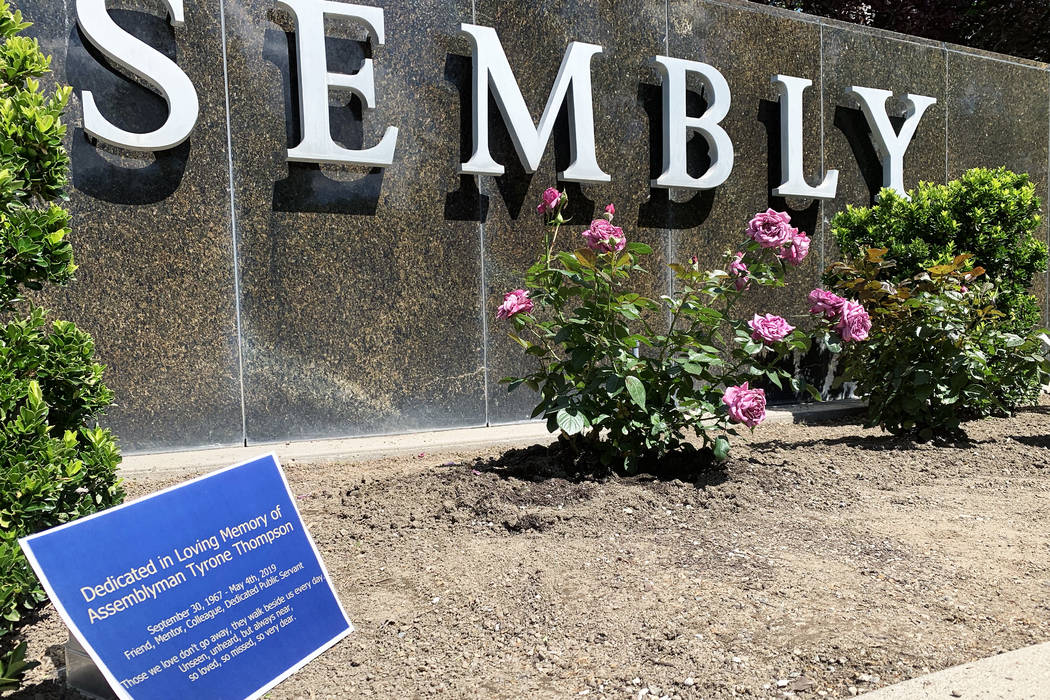 Lawmakers planted a purple rosebush in front of the Legislative building in Carson City on Saturday in memory in Assemblyman Tyrone Thompson of Las Vegas, who died May 4. The sign at left will be installed as a permanent plaque. Purple was a favorite color. (Bill Dentzer/Las Vegas Review-Journal) 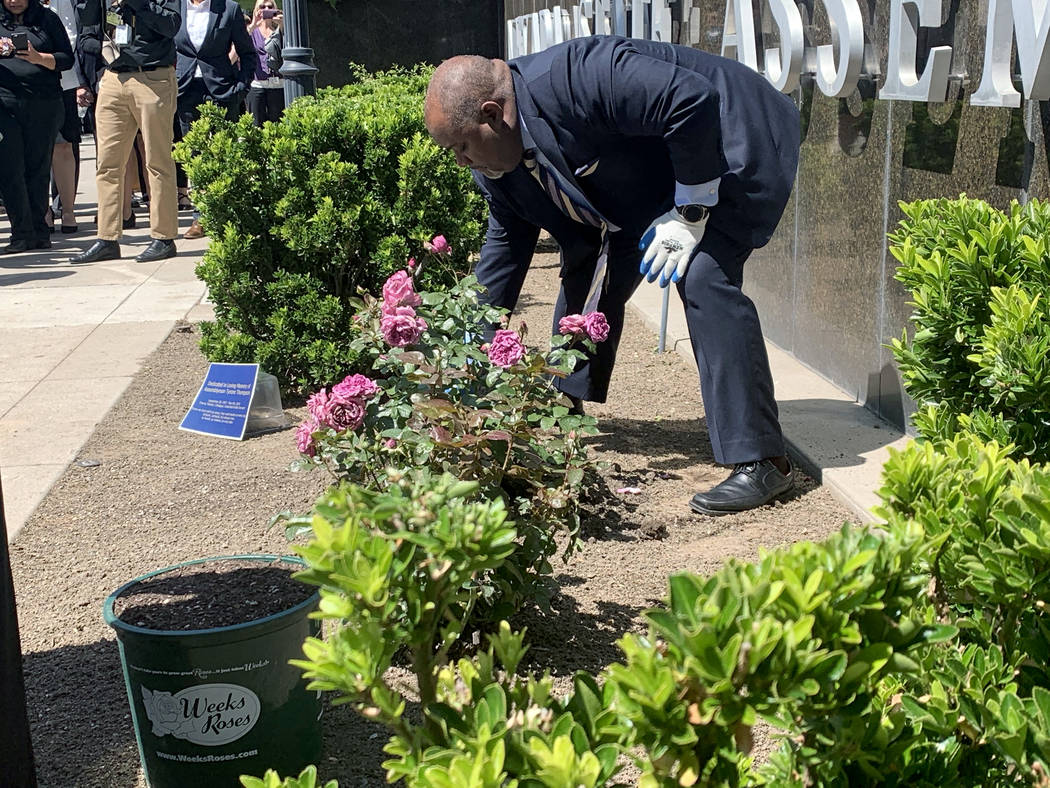 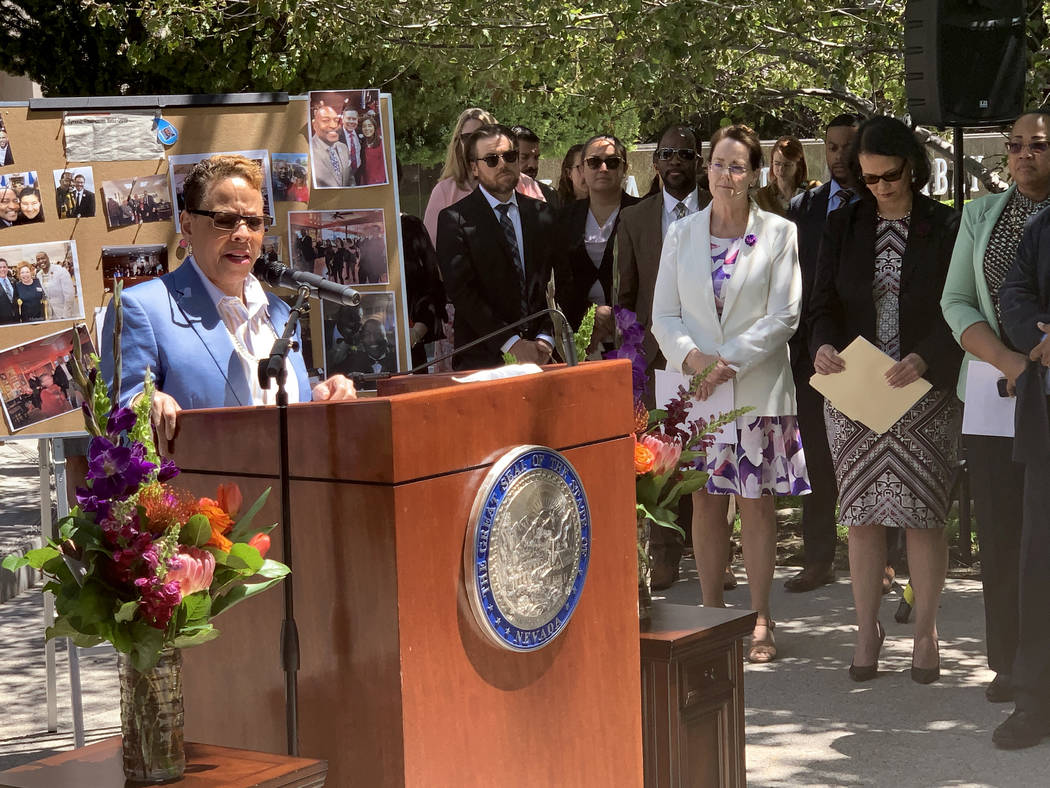 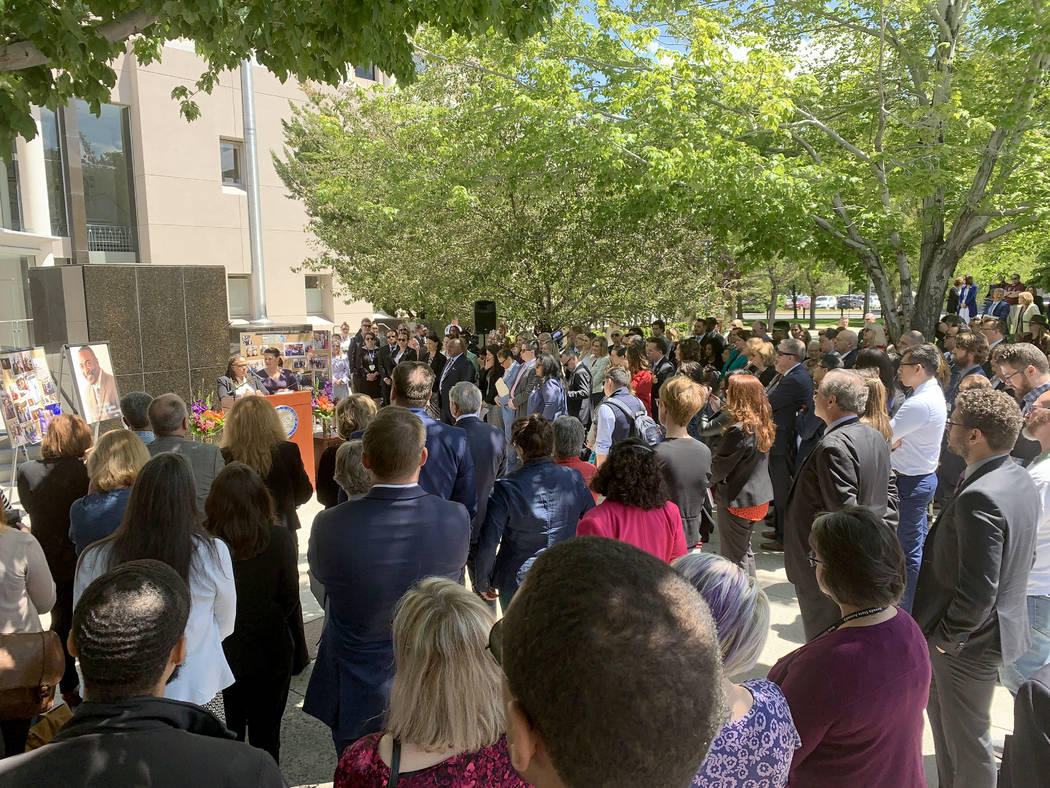 Nevada lawmakers were among several hundred people who paid tribute Saturday to Assemblyman Tyrone Thompson of Las Vegas in a ceremony outside the Legislative Building in Carson City. Thompson died May 4 after a sudden and short illness. (Bill Dentzer/Las Vegas Review-Journal) 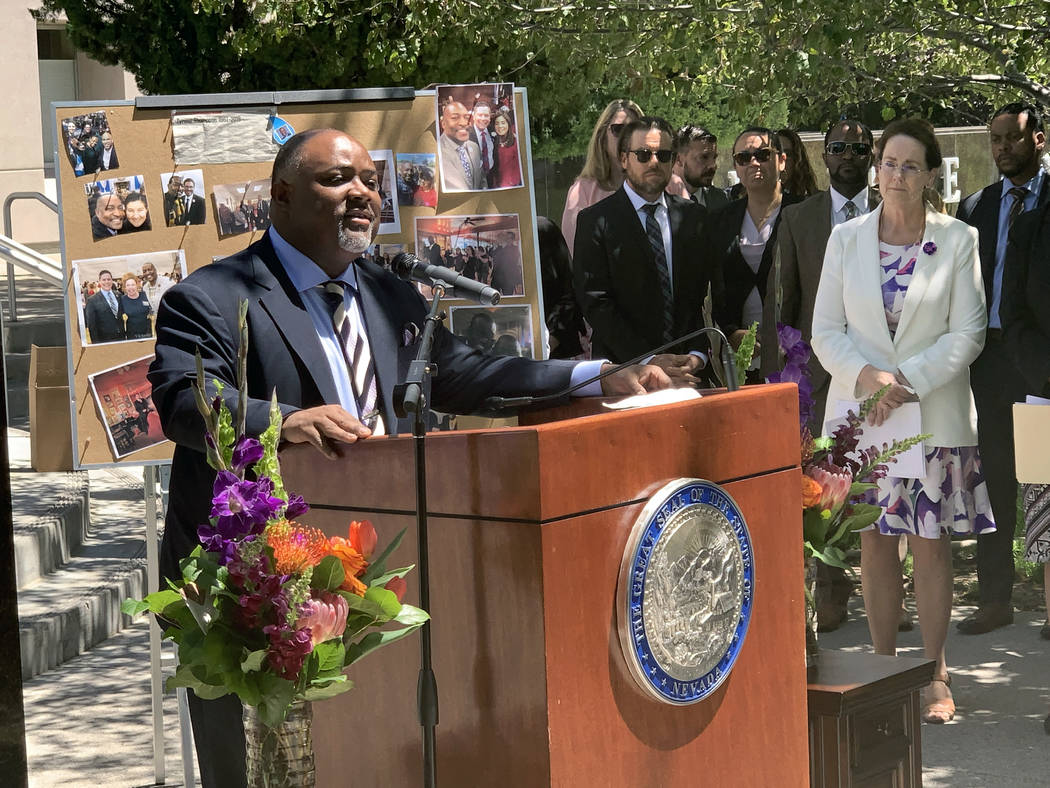 State lawmakers and legislative staff Saturday sprinkled handfuls of soil on the freshly planted flowers. The quiet tribute came after the adoption of a memorial resolution in the Assembly that honored the North Las Vegas Democrat’s legacy, followed by a series of emotional speeches outside in the mild afternoon sun.

“Tyrone had an undercurrent of love and faith that ran deeper than the surface waves of politics and connected with people at a heart and soul level,” Assemblywoman Jill Tolles, R-Reno, said to more than a hundred people who gathered for the outdoor ceremony, including Gov. Steve Sisolak.

Behind the lectern where Tolles and others spoke, a collection of photos showed Thompson, “the king of the selfie,” beaming with friends and colleagues.

“He was one of the most encouraging members of this body in my legislative life, and he had a knack for being right around the corner at just the moment when I was having a really tough day, and I needed a hug and a smile,” Tolles added.

Thompson was known as a champion for education and homelessness initiatives. Before his time in the Legislature, he volunteered for numerous community causes and had worked on behalf of abused and neglected children in the foster care system as a court-appointed special advocate for more than 17 years.

Thompson had served as an assemblyman since 2013, when he was appointed to replace former Assemblyman Steven Brooks, who was expelled from the Assembly after a pattern of erratic behavior.

“I think Tyrone would have wanted us to mourn a little bit, and then go outside and enjoy each other,” Frierson said after the vote, pausing to compose himself and dab away tears.

The resolution’s text described Thompson as a “leader in his community, a role model and a selfless, hardworking public servant.”

Another line read, “Assemblyman Thompson’s famous heartwarming smile will be long remembered as the embodiment of his character.”

Arranged flowers flanked the seat in the Assembly chambers that still bears his name.

Outside during a brief ceremony, Assemblyman Steve Yeager, D-Las Vegas, said Thompson was “a special person in a lot of ways.”

“You sought him out among other people in a room,” Yeager said. “And no matter what was going on in his life, he always made you feel like the special one, as if you were the only one that mattered. And he did that for literally everybody.”

Yeager said that, in his mind, the true mark of a leader is the ability to celebrate the successes of others.

Thompson, Yeager said, “did that like nobody else did.”