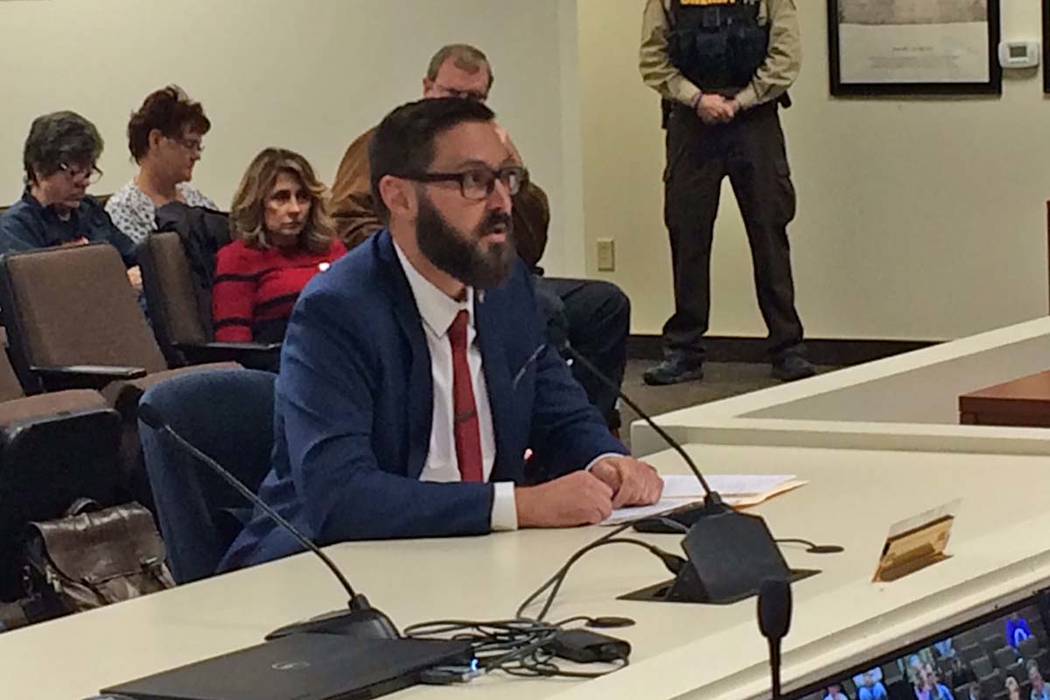 Greg Hafen II addresses the Nye County Commission on Wednesday, Dec. 5, when he was nominated by that board for Dennis Hof's vacant Assembly District 36 seat. (Robin Hebrock/Pahrump Valley Times) 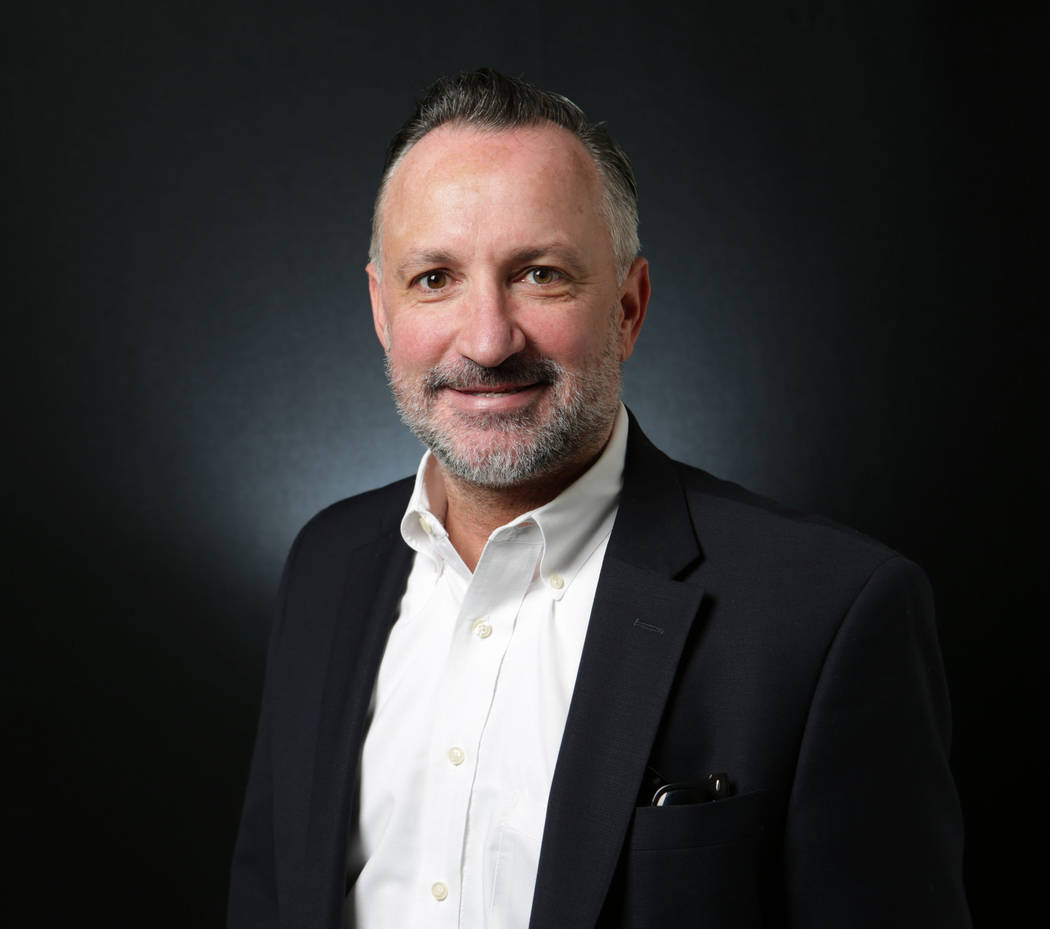 Two Democrat-held state Senate seats in Clark County were filled, one with a sitting assemblyman, as was one Republican Assembly seat representing parts of Clark, Lincoln and Nye counties. Vacancies are filled by appointees from the same party at the vote of local county commissions.

The appointment of a sitting Clark County assemblyman to one of the Senate seats created a new vacancy in the lower house that the Clark County Commission will fill along with a seat vacated by an re-elected assemblywoman who plans to run for Las Vegas City Council.

Two of the appointees are first-time officeholders. The latest appointments don’t change the partisan make-up in either the Senate or Assembly — both of which Democrats control. But they do add another woman lawmaker to the Senate. And women could add one to the majority of seats they represent in the Assembly depending on how the last two vacancies are filled.

Here’s a look at the three newest appointees:

The 33-year-old administrative attorney for the state Public Utilities Commission was appointed to succeed Aaron Ford, who was elected state attorney general. It is her first elected office held. She earned her law degree from George Washington University in Washington, D.C., a master’s in public policy from Claremont Graduate University in California, and bachelor’s degrees in psychology and computer science from UNLV.

“I am a team member,” Harris said Thursday. “Not just of the Democratic caucus, but of the entire Senate and the entire Legislature. And that’s how I intend to pursue any of the initiatives that are important to me, as a team member.”

Education tops her list of legislative priorities. She noted that the state continues to rank 48th — or lower — in national education ratings.

“It’s my opinion that Nevada should be 48th in nothing,” Harris said. “I will endeavor to try to move us up that list, whatever that may take. Whether it’s more funding, better pay for teachers — whatever the most effective way to raise our standing there, I’ll definitely be looking at that.”

“Education and business development work together,” she said. “The more educated our citizenry is, the more we can attract great-paying jobs for the citizens in our state.”

Finally, as a new officeholder, she said she would also focus on getting to know her constituents to “explore what’s important to them.”

“Given that I want to serve, being in the state Legislature, with my background and experience seems to be one of the best ways that I can do that,” she said. “Everyone has tools and specialties and skills and should be using those to better the world and this is my attempt to do that.”

The Public Utilities Commission is a state agency that regulates about 400 privately owned energy, water/wastewater and telecom utilities in the state. Harris said as a senator and agency employee she would take whatever measures necessary to avoid potential conflicts.

His dad goes by Greg, and his grandfather’s name, Tim, is his middle name. So the younger Hafen, who is general manager of the family-owned Pahrump Utility Co., uses the number after his name to distinguish himself among his namesakes.

He needs no such contrivance to differentiate himself from Dennis Hof, the rambunctious brothel owner who won the Assembly seat last month despite dying in October.

Hafen, who never met Hof, was the choice of all three county commissions who chose Hof’s Republican successor. They finalized that decision in a joint meeting Friday.

A Nye county resident who wants the newly elected commission there to choose Hof’s successor has a court hearing Dec. 19 to challenge the appointment. Barring a reversal, Hafen will hold the same seat his grandfather held more than 50 years ago.

“My family history is from a lineage of farmers and ranchers, and I kind of understand their issues better than some,” Hafen said, discussing his rural district. His grandfather moved to Pahrump in 1951 to grow cotton, alfalfa and “some of the best watermelon we’ve ever had.”

Hafen, who turns 36 on Wednesday, was born in Las Vegas but spent time on the Pahrump farm in his youth. He graduated from UNLV and initially worked for the Southern Nevada Water Authority. His family founded the utility company in 1995, started providing wastewater services in 1998 and water service in 2002.

He’s been active in area civic groups and planning and water management organizations – he plans to step down as chairman of the Pahrump Regional Planning Commission and will relinquish some of his day-to-day management of the Pahrump utility because of his appointment.

Hafen hasn’t plotted out all his specific legislative priorities yet, but knows that water issues will be among them. Overall, he wants to represent and work on behalf of sparsely populated rural Nevada, areas he said are sometimes burdened with government-imposed costs and mandates they can’t afford.

“I think it’s very important to have the representation for the rural communities throughout the state and look out for their best interests,” he said. “Sometimes the rural parts of the state get overlooked, and there’s a lot of unique and different needs that the rural communities have that some of the metropolitan areas don’t realize they have.”

Brooks, 46, a Democrat, won his second term representing Assembly District 10 in November. His appointment to the Senate creates a new vacancy for the Clark County Commission to fill. He succeeds Tick Segerblom, who was elected to the commission last month.

“My priorities are the same as they were last session,” Brooks said, citing a need for higher-paying jobs, renewable energy and the interests of working people as his top legislative concerns. In that last category, Brooks has staked out positions on leveling income inequality, providing affordable housing, reducing addressing student debt, improving education, and hiking the minimum wage.

Brooks said he’s lived in the Senate district most of his life — five generations of his family have lived there — and has a “good understanding of the communities that serve.” He “really enjoyed working” with outgoing Republican Gov. Brian Sandoval and looks forward to working with Sandoval’s Democratic successor, Gov.-elect Steve Sisolak.

“He’s done a great job heading the Clark County Commission,” Brooks said of Sisolak. “I would imagine that our political party affiliation will lead one to believe there will be more common ground, and I hope so, but there weren’t a tremendous amount of differences between the Senate and the Assembly and the governor last session.”

He added: “I think we all have similar things in mind. We all want to make sure that Nevada is doing well economically.”

Besides filling Brooks’ Assembly seat, the Clark County Commission will appoint a Democratic successor to the District 11 Assembly seat held by Olivia Diaz. Diaz stepped down after winning a fourth term last month to run for Las Vegas City Council in 2019.